Update:The Globe reports the two people in the car were hospitalized and the the brawl may have started when the dirtbikers through rocks at the car.

DinkerDunkerJones was among the diners at Lucy's American Tavern at Granite Avenue and Gallivan Boulevard in Dorchester who suddenly had front-row seats to a brawl that followed what appeared to be a driver ramming a dirt biker on purpose at the McDonald's across the street this afternoon: Read more.

The nation's first railroad, built in 1826, ferried granite blocks from a Quincy quarry to a wharf on the banks on Gulliver's Brook, which is just upstream of the bridge, and from which the builders of the Bunker Hill Monument got their granite blocks.

Schooner being loaded with blocks from the Quincy railway (the three-wheeled thing is one of the "cars"- from the BPL's photo collection):

Spring brings turkeys to Dorchester, Turkey in the Straw to South Boston 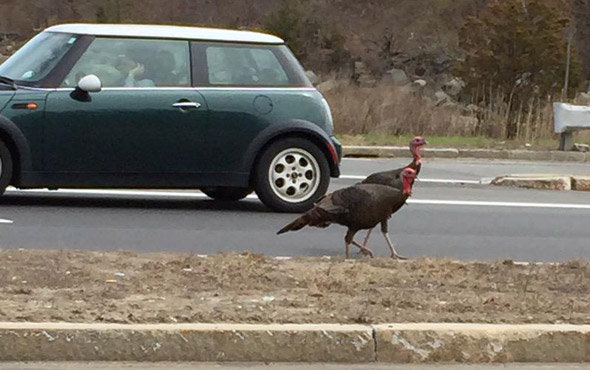 The Brooklinization of Dorchester continues.

In South Boston, Eileen Murphy spotted the first ice-cream truck of the season: A report that somebody jumped off the Neponset River Bridge around 8:15 p.m. brought Boston firefighters by land and sea until they got an update that the jumper was at the Granite Avenue drawbridge upstream a bit, where they met state troopers, who told them that it was a couple of kids jumping off the bridge - who came out soaking wet on the Dorchester side and then ran away when they spotted a statie looking at them.

Ed Coppinger, who happened to be right in the area, reports that 30 first responders showed up, before realizing it was just a couple of kids, not a potential suicide. 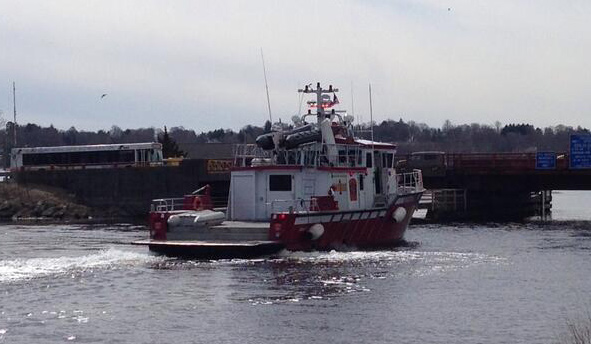 Fireboat waiting for a drawbridge opening that never came. Photo by Todd Duval.

A brush fire along the Neponset River just upriver from the Granite Avenue bridge around noon brought a BFD fireboat - which then couldn't reach the fire because the bridge turned out to be stuck.

BFD spokesman Steve MacDonald reports it turned out the river near the fire was too shallow for the boat, anyway, and that the fire burned itself out about an hour later.

News that the bridge couldn't get up brought the Coast Guard and the State Police, to try to see what to do about that, because the Coast Guard requires draw bridges to be able to draw.