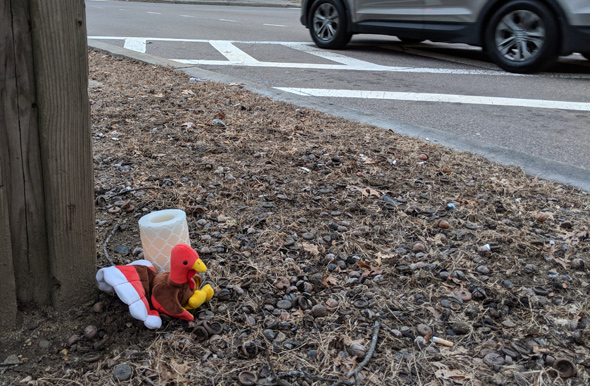 Somebody created a small memorial at VFW Parkway and Baker Street for Larry the Turkey, killed yesterday when he refused to yield to a car. Read more.

Johanna Griffiths reports Larry the Turkey died tonight as he lived: Challenging a vehicle at the intersection of VFW Parkway and Baker Street. Read more.

Larry the Turkey holds his ground in West Roxbury 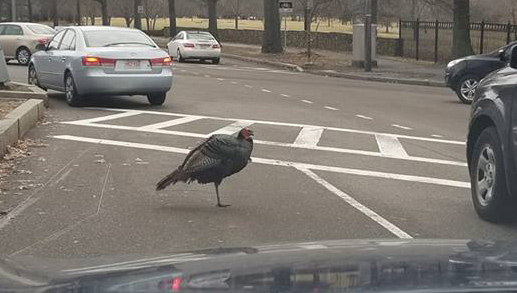 "OK, who's next?!?" Larry gobbled angrily at Maribeth Scott this afternoon.

Two DCR employees with nets learned not to tangle with Larry the Turkey today - he beaked off their attempts to capture him and get him away from his haunts in the middle of the intersection of Baker Street and VFW Parkway this afternoon, according to a discussion on the Chronicles of West Roxbury II Facebook group. Read more.

Larry, the formerly peaceful turkey turned fire-spitting hellspawn by a misguided, if well meaning motorist, is upping his game - and his attacks on cars at VFW Parkway and Baker Street in West Roxbury. Read more.

Alderfish reports that Larry the Baker Street turkey, who has spent the past couple of months dodging cars on VFW Parkway at Baker Street, has turned angry and is now attacking cars, which is probably not good for his long-term health:

After becoming offended last night by a well meaning driver shooing him out of the way, Larry has decided to regain his dominance by fighting off advancing cars.

Peace on earth and good drumsticks to all 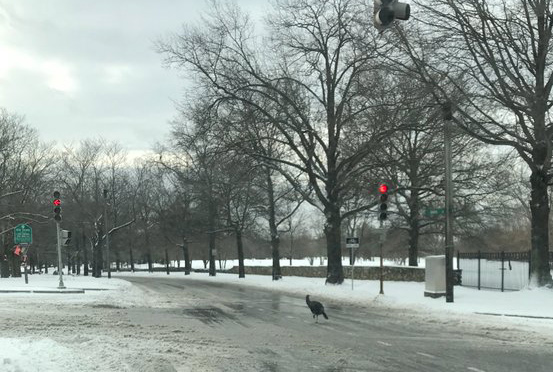