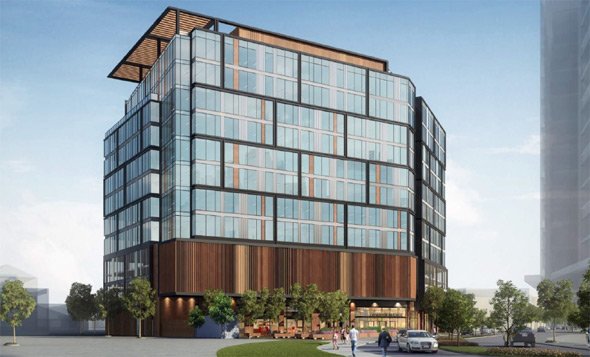 Skanska today filed its detailed plans for the 13-story office building it wants to build on what is now a parking lot in the Raymond Flynn Marine Park (the former Boston Marine Industrial Park).

The proposed building, on Parcel Q1 on Drydock Avenue near the Summer Street entrance to the industrial park, would include ground floor-retail space and three levels set aside for 150 parking spaces. The site, which also includes part of a "dormant" rail line, is about 0.85 acre, and is next to the site for a proposed hotel.

The Project will transform a currently vacant site into an architecturally distinct building that will highlight the entrance to the RFMP, an area that has become increasingly active with new buildings and businesses over the past several years.

The developer says the project complies with a 2000 master plan for the industrial park that requires development that "ensures a strong manufacturing and water dependent industrial base in the City of Boston," although it involves neither manufacturing nor water-dependent uses, because it will bring more workers into the industrial park, which will help bolster it as an "identifiable commerce center."

Also, according to the plans, "constructing desired office space in proximity to public transportation and downtown Boston;" and "providing active ground floor uses and green space that will energize the pedestrian experience" are somehow associated with marine industrial uses. I think you meant Skanska...

Since I have no idea what their social life is like. Thanks, fixed.

If only the industry could find a way to utilize all the latent design talent lurking in these comment threads.

I think the design looks more like an accordion

In honor of babcia, here is the master of the accordion himself, Lawrence Welk

With all of this development, and all of the new tenants filling up the Design Center, the capacity/rate of the SL2 desperately needs to be increased.

Everyone will continue to drive, just like Mahhhhty and Chaaahhhlie, and business owners will complain about the price of parking and traffic without making any connection to the lack of transit.

Meanwhile, Chaaahhhlie will continue to whine about emissions from other states.

You the wealthy will be

You the wealthy will be taking the T? Bwahaha! Of course, they won't be driving, they pay people to do that for them. Wake up to yourself.

How is this related to marine/maritime use? I've been watching over the years how non-marine industry related businesses are being allowed down here.
This is just another step in the continued gentrification of the area.

So the plan is that the retail space can get flooded?

Storm surge and sea level rise flooding ought to be on the minds of every developer along the waterfront.

So the plan here is to allow the retail space to be flooded under these circumstances, and ... ?

They're cheep-er by the dozen
Motorcyclist dies in early morning crash in South Boston
Upscale craft-cocktail bar with 'a boho setting' approved for Fan Pier
The other disaster at the power plant
From the Boston Department of Bad Timing: Mayor celebrates International Building Safety Month, then has to rush over to South Boston
First responders, surgeons able to free trapped, injured worker at power plant without having to amputate his leg