At long last, Roslindale gets its buffet 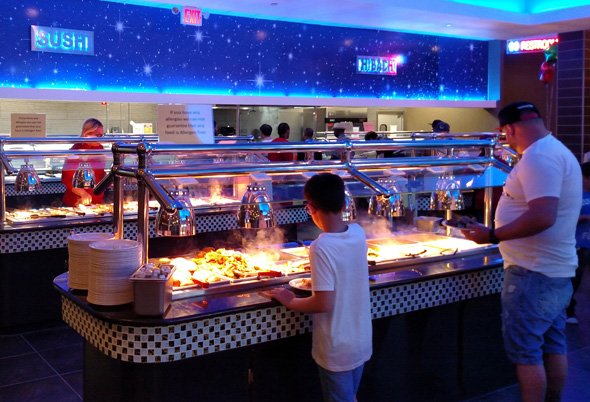 Flaming Grill and Buffet, which offers Chinese and American food, and plenty of it, opened Friday in the Stop & Shop mall at 950 American Legion Highway, next to the Walgreens.

The place did well with its fliers and newspaper ads - the large space was busy tonight on only its second day.

This is not the place to come if you're expecting subtly-spiced, artful dishes. Come on, it's a buffet - you come here to eat plate after plate of stuff at a fixed price.

There are fried things aplenty, from chicken to squid to crab rangoon, along with basics such as dumplings and chicken with mixed vegetables. There was also a lot of seafood - clams, oysters, salmon, shrimp, crawfish, some sort of white fish (but no crab legs). Also available: Your three basic Chinese soups (hot and sour, egg drop and wonton, the latter made with a bit too much salt). For people looking for things with less grease and fat, there's a sushi bar with a decent amount of items and a hibachi area, where you pile up the stuff you want (chicken, meat, vegetables and eggs) and the hibachi guy grills them up, with a flair like that displayed by the chefs at Japanase hibachi places, only without a toque.

Kids or people just not feeling the Chinese can bulk up on mac and cheese, instant "mushed" potatoes, French fries, garlic bread, something labled as prime rib and flat round objects generously identified as pizza.

Plenty of desserts, from fruit to fried dough, cake and ice cream.

We paid $50.71 (including tax) for three people - which included a soda or hot tea with unlimited refills.

Mussels are my favorite shellfish. Seeing those available makes me likely to try it out. Sounds like a decent price for your basic Chinese buffet with some decent seafood options.

All you can eat lemon wedges...

You forgot to mention I if they have ice cream, particularly ginger......

But just the basics: Vanilla, chocolate, strawberry and coffee. Lots and lots of coffee, for some reason. All from the Hershey ice-cream company, which is NOT affiliated with the Hershey chocolate company.

Well, the cups, that is - there was only one type of ice-cream sandwich.

We should hook them up with Puritan. They supply a lot of local ice cream places and restaurants downtown.

Oreo Cookie, M&M Vanilla, Strawberry Shortcake Vanilla, and some other thing with ground up pretzels in it, swirls, etc. Chocolate & Vanilla? How pedestrian! LOL!

You must have coffee ice cream. It's a New England thing.

Thanks for the review, I will be trying this place soon!

of the old Aku-Aku in North Cambridge (probably because of the mention of Ice Cream at the buffet), but I do remember one of those soft serve ice cream machines there where you could have all you could eat soft serve........

Let's hope it lasts. The Old Country Buffet and its sister business Hometown Buffet went under a couple of years back - give or take. Nationwide closure.

They've been at it for awhile

The owner has a similar place up in Revere with a similar (but not exactly the same) name.

These places come and go

I don't know if they're a franchise, but they buy their furniture and decor at the same places. Menus are similar, too.

Fyi food is good. Staff is

Fyi food is good. Staff is kind and polite. Price is decent 9.99 before 3:30 pm (not including drink or tax)
Be careful with allergies and There is another location in New York.

DNA evidence leads police to Roslindale man, now charged with 2013 rape in the Arboretum, 2007 rape in Mattapan
Citizen complaint of the day: Garbage hermeneutics in Roslindale Sqaure
Roslindale Substation formally re-opens as co-working space/beer hall with a pop-up bookshop
Roslindale man missing, possibly in Berkshires forest
On second try, with some parking added, plan to replace Roslindale repair garage with condos, stores is approved
One Roslindale porch pirate might be down in the dumps