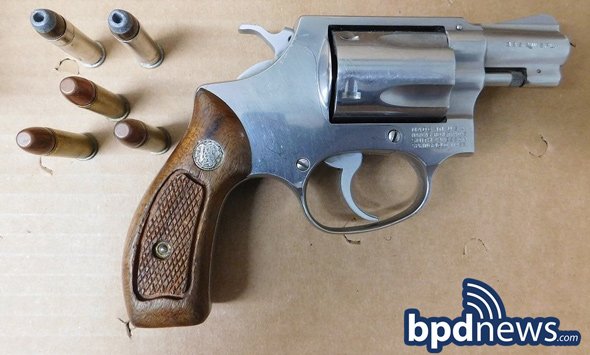 The gun and ammo.

A federal grand jury yesterday indicted Quantae Elmore, 21, on a charge of being a felon in possession of a firearm and ammunition.

BPD officers arrested Elmore, an alleged member of Roxbury's Vine/Forest Street Gang, on May 4, during their investigation into the shooting murders of Chris Joyce and Clayborn Blair at a celebration of Joyce's impending college graduation at the Mildred Hailey Apartments in Jamaica Plain.

Plainclothes officers stopped to investigate Elmore and some other men standing near or sitting in a white Scion in Orchard Park, which matched the description of a car seen racing away from Jamaica Plain after the double murder.

According to an affidavit by an ATF agent involved in the investigation, officers recognized Ellmore as a member of the gang - an affiliate of the Orchard Park Gang, which has long feuded with the Heath Street gang based at the Hailey Apartments.

As Officer D’Addieco attempted to secure ELMORE and recover the gun, a group of males believed to be members of Orchard Gardens or VNF surrounded the officers and began yelling and cursing at them. Ultimately, the officers (who were forced to call for back up to assist with crowd control) were able to secure Elmore and remove the firearm from the area of his waistband.

Recovered from his waistband was a "Smith & Wesson Model 38 SPL that bore serial number R127709 and contained 5 rounds of .38 caliber ammunition" that turned out to have been from a gun shop in White River Junction, VT, according to the affidavit.

The feds were able to go after him - he now faces up to ten years in federal prison if convicted - because in 2015, when just a teenager, he was convicted in Norfolk Superior Court on charges of unarmed robbery and witness intimidation.

Elmore has been in federal custody since July 6 on the charge. Another possible Orchard Park associate, Wilvin Guity, has been charged with the double murder - in which the two men were allegedly shot as part of the long-standing gang feud even though neither had anything to do with the gangs.

It's a deadly weapon for sure. But nothing says Loser Punk Wannabe more than strutting around with something like this.

I think I know what you're

I think I know what you're trying to say, but a revolver is a more reliable weapon than a semi-automatic. Less moving parts, less likely to stick/fail, less sensitive to dirt. And safer - you can see whether you have 'one in the chamber,' so to speak. And since self-defense uses of handguns involve an average of just three shots, there's really no need for a big clip.

Thats actually a five shooter. That's a stainless model 36 "Chiefs special" with a pinned barrel, which means that gun was made sometime before ~ 1982. I have a blued 70's vintage model 36. It is a great little gun, and I sometimes carry it. Of course, unlike the young man BPD got this example from, I carry mine with proper ammo.

I hope they keep a close eye on his cell ... he may or may not be there.

... people are either going to get it or they aren't.

There or not there

Also, they should check on the health of his cat.

Are federal gun laws stricter than our own?

Or do they enforce them better than we do ?

I know why he was charged by the Feds, I'm just wondering,

He was arrested by BPD, and I've seen people charged in Suffolk courts with being an armed career criminal, so it's not like he couldn't face justice here.

I'll take a Fed judge over a MA one because of insanity like this.

Does he have a history of skipping arraignments?

If he has no history of missing court appearances, then why the need for bail?

Person shot in the back on Dale Street in Roxbury
Woman charged with punching elderly man in a wheelchair in the head and robbing him in Nubian Square
Mothers walk for peace again
Citizen complaint of the day: Police can't collar loose goose
Roxbury man charged with lunchtime shooting outside Randolph Wendy's
15-year-old charged with shooting at Ruggles T station last month