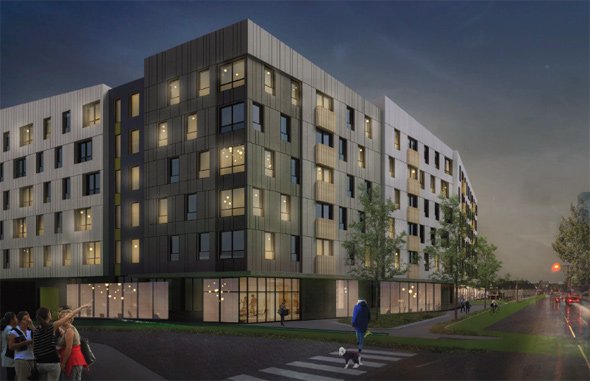 The Board of Appeals yesterday approved a plan by two community developers for a 135-unit, six-story apartment building - and two townhouses - on what is now an MBTA parking lot at the Mattapan Square T station.

Roughly half of the units in the $57-million complex will be rented as affordable - to people making no more than 60% of the Boston area median income, under the proposal by Preservation of Affordable Housing and Nuestra Comunidad Community Development Corp.

The two have a deal with the T for a 99-year lease for the land needed for the building - and say that once the project is completed, they will start work on nine townhouse condos on an adjoining lot.

The building will have first-floor retail space, a community room and a 70-space garage for residents. The MBTA will continue to have 50 spaces in a lot for commuters.

Of the units, 6 will be studios, 38 one-bedrooms, 81 two-bedrooms and 10 will be three-bedroom units, including the two rental townhouse units.

Developers said they are designing the building to encourage surrounding neighborhoods to walk or bike its grounds - they are planning a bike path to connect to the neighboring Neponset River Greenway.

The two groups hope to finalize financing for the project next year.

Who is supposed to live there?

Why are the only people in the artist's rendering white, dogs, or headless?

If they want to make this realistic. Have a crowd of people waiting for the T shouting "its already been 30 mins what the heck!!!?"

Look in the documents - I didn't count, but of the figures whose skin color was readable, about half (or more) had dark skin.

Did you see the guy with no head, though?

Boston needs more of this.

The MBTA is a real estate firm

The MBTA is the largest real estate firm in the state and often plays lets make a deal with rich developers as illustrated by the shady deal when they gave the parking lot and the first floor at North station to the owners of TD Garden. Too bad they suck at providing safe, clean and reliable transportation.

This is a sensible project to replace a 225+ space surface parking lot adjacent to the Mattapan Line with 135 new homes. Still, I can't fathom why the building bends back from River Street and why it doesn't occupy more of the lot.

The project especially suffers from the "green space" for the sake of green space seen in many large developments. Instead of creating all these pockets of private green space, the development should instead encourage people to walk the river trail to the nearby Ryan Playground or head over to Hunt Playground. Then, the site could have accommodated even more homes.

That rendering was done by an architect

and not my brother-in-law after taking a ten-minute on-line course in CAD software?

Wow, 50 spaces! That will definitely provide a meaningful service to the *checks notes* 1,500 plus daily boardings...

Can we not think of a more meaningful use of ~14,000 square feet of real estate?

You can never build a viable transit network based on park and ride facilities--just look at the struggling commuter rail.

Building 135 homes adjacent to the station is a far better use of space.