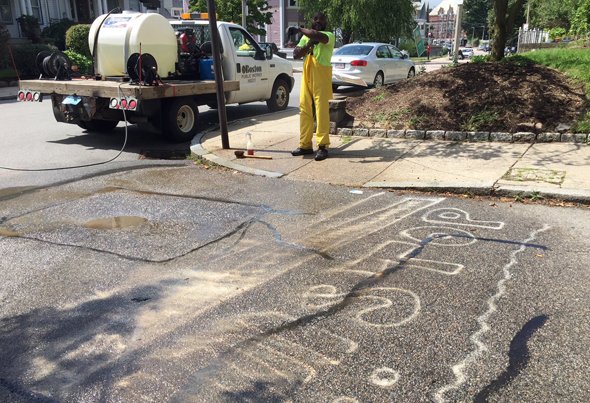 Ted Siefer watched as a city crew power washed away guerilla street markings on Fairview Street at South Street today. Somebody had painted the markings about three weeks ago at the intersection, where some motorists had decided "Stop" was only a suggestion and pedestrians not really worthy of attention.

Did they paint DOT-standard markings?

Or did the city just decide it felt like waving its (expletive) around today?

I would like to see the 311 citizen's complaint on this one. Was there one?

Or are people playing the "won't someone think of the pedestrians" card again. Standards and requirements exist for a reason.

Have you walked around here? Drivers complain that pedestrians dont use crosswalks, well, its hard when they don't exist.

I’ve run by this intersection a few times

On the surface, there’s no reason not to have the markings. Other similar intersections in the area have the crosswalks and stop lines.

On the other hand, on the other side of the square, they repaved half of Washington Street, forgetting to restripe half a crosswalk and put the bike lane markings back.

EDIT- to be clear, by “running” I mean going by on foot at speed.

Standards and requirements for drivers exist for a reason

Unfortunately, the city and state can't seem to find that reason despite recent carnage.

Just because somebody came up with a standard doesn't make it gospel or optimal for every situation.

A good engineer knows when to follow standards strictly, or loosely.

Do you think a competent

Do you think a competent engineer decided on the absence of markings on many Boston streets? Or to let markings fade away and not repaint them, even on busy downtown streets that are supposed to be multiple lanes?

While I disagree with the method (and design aesthetic), I do feel for Leonardo da Crosswalk. This area (with Green T, Fallon Field, Rozzie Square, Commuter Rail station, the Arboretum, and a densely populated street network) is a speedway. People just don't stop at stop signs or drive anywhere close to the posted 25 mph. Lots of pedestrians, cyclists, and kids all over.

This budding artist has hit like every intersection along South Street (and a bus stop), Therefore one might think the city would take notice and add some actual traffic calming/crosswalks/etc. But instead, they will just wash away this mess and not return to address the root problem.

I anticipate more DIY crosswalks are in the future.

He probably would have gotten

He probably would have gotten away with it, too, if it wasn't for the slapdash nature of his efforts.

Somebody crowdfund this person the 100$ to buy a proper striper, an orange vest, and a couple cans of paint off amazon already.

This is what happens when new "progressives" move in and think that Roslindale is some kind of suburban back-water and think they can mark all of the dirt roads to their liking. I'll bet some of them complain about the train noise.

I've noticed the real estate agents often show properties in the area on a Sunday when there is no train traffic, then after they move in, "whammo!" VTW, I see RE agents doing this all over Roslindale. Buyer beware.

There is a neighborhood process for getting such markings that can be easily determined, get appropriate signatures, sign-offs by city departments that may be impacted (transportation, traffic, police, fire, EMS -- yes these all have to sign off for their areas of responsibility).

The process can take some time (weeks to months usually - rarely years), and does require the proponents to do the leg work to get requests in, signatures of abutters, etc.

This is just a combo of locals (newbies) not knowing the process and not taking any time to learn, and just wanting their own way and excusing it (blaming actually) on a city government that doesn't care. They do care, but there is a process for this and it is likely some of these people were told and "... just don't have the time..." Assimilate into city life and learn the process. Call your neighborhood rep (Coppinger) or your city councilor (McCarthy).

In a city, "we the people" that want their own way is not based at the neighborhood level, but on a much broader scale. It is that way to protect the interests of all, and not just a select few.

Let us not forget the resident parking fiasco just off the business district when it was found that the process was circumvented and signatures were found to be forged and more people than expected did not want parking restrictions. The drug store was considering moving due to all of that as they were seen as the bad guy. They were talked out of that. We are adults, or should be, and stomping your feet to get your own way is just not the correct process.

As to guerilla cross walks, your "Leonardo" can be arrested if caught, or some neighbor is willing to ID and testify, and charged with vandalism of city property, and could be charged with the cost of the steam cleaner removals.

Because grizzled old-timers would rather just sit around and bitch about how awful things are and not do a damn thing and just let the entire neighborhood go to hell in a hand basket because they're too busy sitting on their porches screaming at those kids to get off their damn lawns. That's why Roslindale Square is such a hellhole.

It's about on part with saying only some JP newcomer could have possibly painted that "crosswalk," no?

Also, as nice a guy as Ed Coppinger is, I think even he'd admit he doesn't represent large parts of Roslindale.

I'm a relative newcomer (9 years ago), and from what I've seen it's the lifelong residents who seem to think it's a suburb. Most 'newbies' are well aware it's the city, which is why people fight for better and safer infrastructure for pedestrians and people on bikes.

Please don't make stuff up. You don't need signatures of abutters for a crosswalk striping project.

Would love to know if there was a 311

I have to say, when I saw these painted on the street my immediate reaction was “ever heard of 311”? Those intersections do need cross walks but painting stuff on the street is stupid. Call the city. If they city balks call Tim McCarthy. This does actually work.

Another example of the city

Another example of the city paying more attention to graffiti than criminal drivers killing pedestrians.

Section 1A.07 Responsibility for Traffic Control Devices
Standard:
01 The responsibility for the design, placement, operation, maintenance, and uniformity of traffic control
devices shall rest with the public agency or the official having jurisdiction, or, in the case of private roads
open to public travel, with the private owner or private official having jurisdiction. 23 CFR 655.603
adopts the MUTCD as the national standard for all traffic control devices installed on any street, highway,
bikeway, or private road open to public travel (see definition in Section 1A.13).

And lose the snark about drivers being murderers - it's getting old.

You're a lot more likely to be killed by an initiative driver then MS-13 or an illegal immigrant yet there's little outrage about it.

If you shoot a gun into a crowd, you would likely be charged with murder.

If you habitually pilot a deadly weapon in a dangerous fashion, that means that you fully intend to create the conditions that will kill someone, in the same way that shooting a gun into a crowd on purpose indicates intent.

How many people have you killed with your car, Roadman? Gotta wonder given your consistent defense of sacred drivers and their sacred vehicles being sacred.

To answer the question

None. Like the vast majority of people out there who use cars every day.

And unlike a car, a gun is deliberately designed for one purpose - to maim and kill other living beings. I doubt the majority of those who get into crashes with their cars thought "Who can I maim or kill today? when they to get behind the wheel.

a gun is deliberately designed for one purpose - to maim and kill other living beings.

You clearly know very little about guns. Even less about how gun technology is used for other applications - including highway construction and marking.

Good thing there won't likely be a bid on the Olympics in MA, winter or summer. Your ignorance of what firearms are and can be used for is, well, typical.

I'm going to disagree with you on this

Even breaking down what a gun does to its bare minimum, it's purpose is to hit something. Check out the regular professions of athletes who compete in shooting and the biathlon. There's a huge tilt towards the armed forces, where soldiers are trained to shoot to kill.

As I posted before, with all of the six figure salaries in Marty Walsh's City Hall and the alleged intimidation of non-union workers, why not hire a BTD crew to paint STOP and a stop line at every stop sign in the city? Sometimes people just don't see the sign. I'm no fan of graffiti but I like this. It may save a life.

It is also cost neutral as Ch. 89 S4a is a $100 fine, failure to obey pavement markings, in addition to the fine for Ch.89 S9 failure to stop for stop sign. Totally incompetent Walsh administration. It would be a tribute to the young child and all of the pedestrians/cyclists recently lost.

I often don't agree with you, but 100% on this one. There's no excuse for not buying a big tub of paint (okay, or whatever plasticky substance they use) and putting bars and crosswalks at every intersection in the city. No lights to retime, to agencies to involve. Those are already unmarked crosswalks (legally the same as crosswalks, but try explaining that to a Masshole) so you might as well codify them. Also makes enforcement easier; it'd be nice to see BTD nabbing some rollers every so often.

(And lest you think this is a Massachusetts problem, last week in Chicago I was nearly hit twice, once by a woman on her phone rolling a stop sign, another by a guy with Mississippi plates actively trying to run down pedestrians.)

Roslindale supermarket getting new owner and name and renovations
It's like March again: Bank shuts one branch, limits access at others due to Covid-19
Roslindale's annual snowplow display comes to an end; Belgrade Avenue garage to be replaced with condos
Chinese takeout, Middle Eastern market and yogurt place in Roslindale Square could be replaced with six-story residential building
Shots fired on Beech Street in Roslindale
Boston Apartment Availability Percentage Spikes in Key Neighborhoods - Reveals Ominous Trend