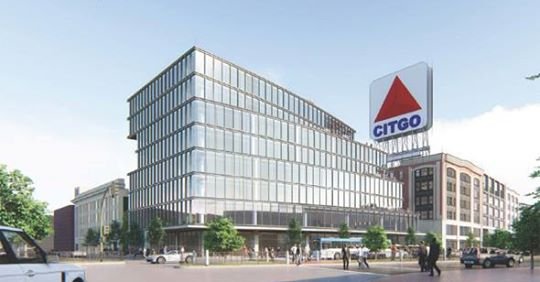 Related Beal yesterday filed its detailed plans to remake the Kenmore Square block topped by the Citgo Sign, featuring the replacement of six of the seven buildings and an extensive overhaul of the building that supports the sign.

In its filing with the BPDA, the developer says its plans for retail and office space, which would feature an eight-story building at the corner of Commonwealth Avenue and Deerfield Street, would "reinvigorate the underutilized and partially vacant buildings" - although many of the vacancies are due to tenants being moved out to make way for the redevelopment of the BU-owned buildings.

The project will help dramatically change the look of Kenmore Square, especially when coupled with the two hotels planned for the other side of Commonwealth Avenue. But the new Related Beal buildings will not dramatically increase the amount of space available for rent: The new buildings would have a total of 216,500 square feet of space, an increase of about 88,000 square feet over the current buildings.

The developer says the new project will mean "very limited incremental impacts" to traffic in the area, in part because you can't get much more transit-oriented than Kenmore Square, what with its Green Line stop, bus service and nearby commuter-rail station. It is proposing to add a 60-space underground garage to the site's existing rear parking lot. Related Beal discusses some of the design considerations in creating a new block that continues to support Boston's triangular beacon:

The massing of the Commonwealth Building [the new building at Comm. Ave. and Deerfield Street] and Beacon Building are designed to create a dynamic addition to Kenmore Square that does not overwhelm the existing view corridors from key street-level approaches. To achieve this, each additional level angles back toward the Charles River to minimize the perception of the height, thereby granting defined visibility of the Citgo Sign. Overall, the additions complement the heights of the surrounding buildings. The Commonwealth Building steps down to reflect the curvature of the vehicular intersection, creating opportunities for outdoor space at these roof levels with direct views of Kenmore Square.

Related Beal hopes to begin work at the beginning of 2019 and finish by early 2021. In addition to the BPDA, the project will also need approval from the zoning board. Releated Beal said it will also ask the Boston Landmarks Commission to take a look.

Let's just push the top two floors out of the way so everyone can see the ugly sign.

Looks odd and out of place.

Looks odd and out of place.

This is what drives me nuts about "architecture" today

These so-called architects show zero regard for the existing neighborhoods they build in.

It is possible to do a modern building that harmonizes with the existing structures around it. But nobody seems interested. At all.

Kenmore Square is full of red

Kenmore Square is full of red sox fans and bu students. It is a good location to dump ugly buildings. No one will notice.

Kenmore Square is home to

Kenmore Square is home to many permanent residents who are likely Red Sox fans, but not necessarily affiliated with BU. Please do not dismiss our neighborhood for a dumping ground of tasteless architecture. #rude

Oh, thank heavens! For years I have abstained from bringing my dear parents to the area, lest they have their eyes seared by the street urchins that congregated at Cornwall's. Thank you, developer gods, for finally shedding Kenmore Square of its last bit of grit and grime. You are truly doing Yeoman's work!

If they're barely adding space

then what's the point?

This claims Cornwalls is on the chopping block. That's really, really sad. They say Cornwells will "find a new home" in the new building but that seems highly unlikely at the rents they'll be charging. Even if the rent was the same it's not like they'd cover the build-out cost for the restaurant plus the 1-2 years they'd be closed.

To review: We lose a great local restaurant and some interesting historic architecture. But we keep an ugly advertising sign for a business owned by a hostile foreign government and in which no local franchises exist nearby.

There's a handful of Citgo

There's a handful of Citgo stations inside 128- there's one at Huntington Avenue and the J-way less than 2 miles from Kenmore Sq./ Fenway

The ex-Exxon, then Mutual, station in Reading

adjacent to the I-95/Route 28 interchange has been a Citgo for some time now.

Hostile to whom? Citgo has a history of helping American citizens who have trouble affording heating oil. That's a hell of a lot more than Exxonmobil ever did. It was the Bush administration that initiated hostility toward Venezuela. The roots of that hostility were in US corporate boardrooms, as with so much of Republican policy.

How did all that generosity

turn out for the people of Venezuela?

We are the hostile foreign government of the world.

Venezuela has never invaded us. Never drone bombed us. Never sponsored a coup to force our government to change.

See how much you like eating heaping bowls of steam that you have to stand in line for.

Socialism, as much as I admire it in theory, would work a lot better if there weren't so many self serving idiots espousing it.

I've traveled throughout Venezuela, and the only place I ever saw people standing in line for food was outside of really good restaurants.

How'd it turn out?

Pretty well, actually. For reference, the US Gini Index is 45, which is not good for an industrialized Western country.

They are a NATIONAL oil

They are a NATIONAL oil company which is supposed to maximize profit to provide a funding source to benefit Venezuelan citizens. Instead CITGO stole oil profits from their poor people to give to RICHER poor people in the US for a political stunt. How is THEFT from one set of poor people to give to foreign people whom are comparatively less poor a good thing?

That heating oil was stolen from "the good people of Venezuela" to extend the political franchise of the Kennedy family. Notice you don't see "Joe4Oil" on TV any more?

True Cornwalls fans already miss the original. When it moved across the street, it became something very different, including a fairly generic feel, not dissimilar from how this new building will look. The Kenmore of the true Cornwalls is already long gone.

Amazing how from the 90's to this, Kenmore will now be UN-recongizable. Not to mention look like every other "city" square anywhere in the world. gross.

As much as I complain about the changes in this town...

I will be more than happy to see the Citgo sign go. A relic of a soon to be bygone era.

The Citgo sign has always seemed obnoxious to me

Some Bostonians who have lived here even longer than me consider it the area's culture. I call it Stockholm Syndrome.

I've been here my whole life

If you lived in Kenmore, ever

Minute Maid Park in Houston has a small Citigo Sign in Center Field. It’s like when the Penguins stole the Bruins colors in the 80’s. Tacky and ungraceful.

In order to foster a real Boson place it would be nice for Related not steal back Houston’s architecture for Kenmore.

I think something like “Enron Field” would be catchier!

Citgo headquarters is in Houston

If any other ballpark did this, I'd be annoyed, but the sign does properly belong in Houston. The company has a lot more to do with Houston than it does with Boston.

is that what architecture amounts to nowadays? Everything is always square and glass. Sometimes at best the upper floors are cantilevered. Ridiculous. Been over a decade of this crap. I first noticed it at university. Now everything cool with character has to be replaced with glass bullshit. This one is especially ugly.

either as a gut renovation or just the façade. It's a handsome example of 20th century brick architecture, a last remnant of urban fabric, and lends a human scale to the site.

It can be done and has been done well recently. Imagine Filenes or the Bolling Building (Dudley) without having kept the existing historic structure.

The corner/Deerfield side of the building is so beautiful. I'm sure the facade could be preserved and expanded upon.

It seems we're getting a lot of them these days. Darken the metal and voila!

Unlike the sentiment here, I do have an attachment to that Citgo sign. It's our North Star. As I get older, one thing that I still share with fellow BU students is that sign. For that reason, I don't want to see it go.

But that building is trash. It is a bland suburban glass box in a spot that should be an "entrance point" to Boston. The design of the building screams rents so high that it means it will filled with business that will be a cultural net loss versus what already there.

The sign was functionally a North Star for my husband when he was a grad student at BU. He lived in the apartments behind this building and if he ever got lost in the city, he'd just orient himself to the sign and make his way towards it.

Add a new neon sign by a local neon artist.

Don't let neon art be limited only to a traditional sign.

Seriously, is this really the best we can do?

If the sign was to go, would the U-Hub logo have to change?

In coronavirus crisis, Asia's loss is Boston's gain: Instead of going to Asia, BSO will play series of local popup concerts
But does it have Smaht Pahk?
Like magic, two BU Green Line stops will begin to disappear
Wentworth unveils new logo
LGBTQ theater group to run new LGBTQ-focused theater in apartment building that will replace LGBTQ club in the Fenway
Another Boston measles case reported