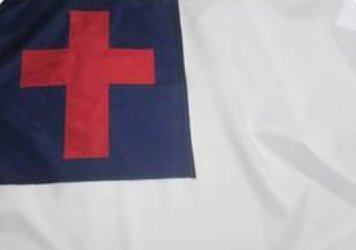 From Shurtleff's request to the city.

Hal Shurtleff, a West Roxbury resident and former John Birch Society member, is suing the city for refusing to let him fly a flag with a prominent cross on on one of the three flagpoles at City Hall Plaza for a pro-Christian event he wants to hold on City Hall Plaza on Sept. 17.

The city denied his similar flag request last year; this year, he followed through with a threat to file a federal lawsuit over his "Constitution Day" commemoration, which this year will include a talk on "the need for racial reconciliation through Jesus Christ."

In his lawsuit, filed in US District Court in Boston by his lawyer in Agawam and the Liberty Counsel, a non-profit Florida group that represents evangelical Christians, Shurtleff, who runs a New Hampshire summer camp at which kids can learn "how to be a freedom activist," charges Boston is depriving him of his First Amendment rights.

The suit notes that in the past the city has flown the Portuguese flag:

The five blue shields of the Portuguese flag represents the five moor kings defeated by the first King of Portugal, D. Afonso Henriques at the Battle of Ourique. The dots inside the blue shields represent the five wounds of Christ when crucified. Counting the dots and doubling those five in the center, there are thirty dots that represents the coins Judas received for having betrayed Christ.

The city responds that Shurtleff is free to hold an event on City Hall Plaza, as have other religious groups, but says the flagpoles themselves have never been a "public forum" where anybody can express anything they want. Instead, the city says, they have always been used solely to express the government's own viewpoints, and one of those is to not allow religious flags that might look as if the city is endorsing the views behind them.

City attorneys note the US Supreme Council ruled, in a case involving similar arguments, that Texas had the right to reject a demand for license plates featuring a Confederate flag.

Plus, they continue, letting a primarily Christian flag fly from a city pole would likely violate the Establishment Clause of the First Amendment, the one that calls for separation of church and state.

Judge Denise Casper heard oral arguments from the two sides on Aug. 9, but has yet to issue a ruling.

A simple solution to the issue

The City should use the three flagpoles for their intended purpose. One of the U.S. flag, one for the Massachusetts flag, and one for the City of Boston flag. No more controversy.

I agree. Keep it to the three intended flags. Enough with all the the various and sundry flags for every little occasion and festival such as the Puerto Rican Flag, the Haitian flag, The Rainbow flag (and I say this as a gay male), and all the many others. I know it's diversity and it's kind of a nice gesture and all, but it makes for too many little "fiefdoms". And the slippery slope leads to things like this. We need to be united more instead of broken down into so many separate little groups with their own flags.

The city would rather spend

The city would rather spend time/money drafting 20-page legal documents to defend their current practice.

Is to let legal bullies like Shurtleff and his Liberty Council run roughshod over the constitutional rights of the rest of Boston residents.

Sorry, but it's not 1640 anymore and Massachusetts is no longer a theocracy.

And it would appear that by selectively deciding which flag can go up and which flag won’t, isn’t the City running roughshod over the constitutional rights of residents.

Also, you do see the difference between this and the Puritans’ theological requirements in seventeenth century Boston, right?

Boston City Hall has FIVE flagpoles, not three. Its on purpose

There will always be varying flags throughout the year. That's the point. The POW-MIA flag has become a regular. Several important flag ceremonies occur on the plaza. The Ukrainian flag flies at City Hall today. At a particular height. Please understand why. Boston is a democratic city. A democracy is muddy. This democracy allows you to make naive comments year around.

Yes, but two are not at issue

Shurtleff wants to fly his cross above his demonstration on the plaza, not crammed into that little space on Congress Street, so the two flagpoles there are not an issue.

All five poles are options. Some request the Congress St poles

A quick google image search says you are wrong. Take a look at the photo that accompanies this story. The POW/MIA flag is under the American flag. The "other" flag simply replaces the City of Boston flag.

And for the record, the substance of the article or the editorial stance of the website I am not endorsing, but they do have a photo of the flag poles in question, so they get the link.

I'm cheering for him

To me, the ideal outcome would be the city ending the practice of picking and choosing 3rd party flags that can be raised on public property. Sadly, the city will probably win because of Walker v. Texas, which revealed the height of the Supreme Court's hypocrisy in choosing sides. You know that if the banned license plate displayed the image of a coat hanger instead of a confederate flag, then the justices (especially friggin Clarence Thomas) would have voted differently.

I wonder if the ACLU is helping him out.

The last rational provided by the city

Is absurd, if they believe that then they must be planing on flying a White Lives Matter flag or a Straight Pride flag (if one exists).

It's actually a very legitimate concern

Who said it wasn’t a concern

All I said is they negate their own rational via their promotion of liberal flags previously flown at city hall.

"Thou shalt keep thy religion to thyself."

You will find no bigger cry

You will find no bigger cry babies in the world than white male christians like this nut. They love to pretend like they are a victim when in reality the complete opposite is true.

Has the city ever flown...

Flag of the UK (crosses of various saints)

Flags of the Commonwealth nations (same)

or any of these

Flag of U.K. has previously flown in Boston

A few centuries ago but pretty sure that happened. Sorry, couldn’t resist!

The U.K. (and its flag, the Union Jack) did not exist until 1801. The War of Independence was fought against Great Britain, which had a flag with one less cross in it. Ireland had been subjugated, but not incorporated.

Maybe the city council should

Maybe the city council should also do away with religion-flavored convocations before its meetings.

When the city lists the flag poles in a list along with other public forums on their website it would seem to me that they lose the argument that it is not a public forum. Moreover, the contention that the city has a strict policy on denying non-secular use of public forums is false. Easter service has been held at Fanueil Hall (which is on the same list as the flag poles).
http://www.redemptionhillchurch.com/event/943695-2017-04-14-good-friday-...

Let him fly his flag

Then we can put together a pythonesque troupe of "crisis actors" to enact an Arthurian legend worshipping it.

It would be satisfyingly ridiculous.

When convenient, Marty Walsh boasts of being saved by Christ (cancer/alcoholism) but banishes the cross from the same pole where the gay rainbow flag routinely flies? You can't make this stuff up.

So don't vote for him next time out

Oh, wait, you don't live in Boston, so too bad.

Some of us might appreciate him more for respecting the First Amendment. And we vote.

When convenient, Marty Walsh boasts of being saved by Christ (cancer/alcoholism) but banishes the cross from the same pole where the gay rainbow flag routinely flies?

Evangelica Christianity isn't a monolithic belief structure. It's a term referring to a pretty broad spectrum of beliefs that share a common characteristic of personal conversion/atonement. Painting all of them as anti-gay shows you either don't understand what it is or are being dishonest.

But he's not whom we're talking about here.

The "gay rainbow flag" does

The "gay rainbow flag" does not deny the rights of Christians,

The "gay rainbow flag" does in fact deny the right of Christians to unfurl the "random Christian flag". That's the reason this lawsuit exists, however trivial the flying of any particular flag.

Shurtleff is free to bring a giant Christian flag to City Hall Plaza, hell, he could even bring one of those giant crosses on wheels strapped to his back like the ones you occasionally see people rolling around town at Easter time if he wants.

What is at issue is just the flagpoles, not City Hall Plaza. The city argues the flagpoles have never been a "public forum" like the plaza or the Common, but are, instead a place where city government expresses its views. And if you don't like the fact that, for a long time now, both the city council and the mayor have been strongly in favor of LGBTI inclusiveness, well, you can organize a slate and run against them, or, in the interim, organize a large rally in protest, which you will be granted a permit to hold.

Compare to another "public forum" - Boston Common. Short of a cross, it'd be hard to think of a more Christian religious symbol than a creche. And yet, despite the First Amendment, every Christmas, there's a creche right there on the Common. Why? Because the city also allows orthodox Jews to put up a menorah. The establishment clause doesn't necessarily mean public property can never be used for a religious purpose, but that if it is, it has to be open to all religions - which Florida found out a few years ago.

Christians can seem to figure out many things (e.g., heaven and hell, transubstantiation, water to wine, etc but can't seem to conceptualize that the rainbow flag represents more than just "gays."

Of course the Trump evangelicals probably think transubstantiation has something to do with "top" or "bottom" surgery and therefore inherently evil...

Do you realize that in addition to fluoridating water, why, there are studies underway to fluoridate salt, flour, fruit juices, soup, sugar, milk, ice cream? Ice cream, Hal? Children's ice cream!...You know when fluoridation began?...1946. 1946, Hal. How does that coincide with your post-war Commie conspiracy, huh? It's incredibly obvious, isn't it? A foreign substance is introduced into our precious bodily fluids without the knowledge of the individual, and certainly without any choice. That's the way your hard-core Commie works. I first became aware of it, Hal, during the physical act of love... Yes, a profound sense of fatigue, a feeling of emptiness followed. Luckily I — I was able to interpret these feelings correctly. Loss of essence. I can assure you it has not recurred, Hal. Women, er, women sense my power, and they seek the life essence. I do not avoid women, Hal...but I do deny them my essence.

Car bursts into flames in downtown garage
Across Boston, lights flicker twice
September local-food festival on the Greenway canceled because, well, you know why
Man charged with threatening to beat people like a drum in Downtown Crossing robberies
Walsh: Keep Faneuil Hall's name lest we forget why we cared about the name in the first place
Owner of mall building next to Faneuil Hall Marketplace sues tenant for not paying rent during the pandemic