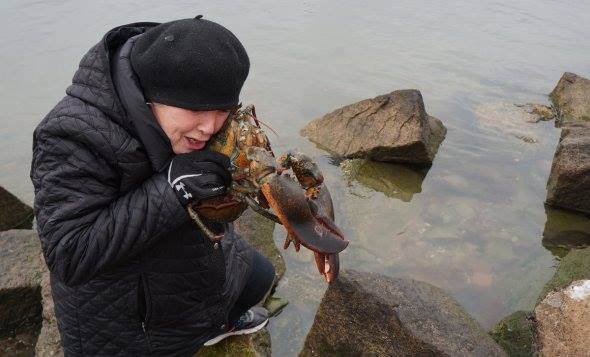 A farewell before Larry is released.

Ever since Roche Bros. in West Roxbury re-opened its seafood department before Valentine's Day, one lobster went unsold: The biggest of them all, a lobster so large the other lobsters crowded around the edges of the tank just to stay away from him, so large that shoppers would bring their kids over to see him.

The poor plight of the lobster began to bother some people over in Roslindale, who used a neighborhood Facebook group to ponder doing something about Larry's fate - yes, of course they named him Larry.

This afternoon, after several days of discussion, Karen Kane walked into Roche Bros. - armed with donations and promises of funds from several kind-hearted Roslindale residents and a couple of parents at the Haley School, where she teaches and where they gave her some money today after they heard she wanted to liberate Larry.

Kane said she just couldn't abide the thought of a creature that might be 50 years old ending up stuck in a tank like that rather than spending its life in the cold water at the bottom of the sea.

Kane told a seafood worker she was there to buy Larry so she could set him free. One of the guys got him out with that rake thing and weighed him - he came in at about 5 1/3 pounds - as other seafood workers and other workers manning a table handing out free fried-scallop samples watched. The seafood guys put him in a box with some damp newsprint.

Kane and her neighbor, Lucy Bullock-Singer, took him up front to the checkout and a cashier who rang up the nearly $95 sale.

The two - and a reporter they graciously agreed to take on the journey - put Larry in the back of Bullock-Singer's car for the ride to freedom, which in Larry's case meant the waters off Columbia Point, behind the Boston Teachers Union headquarters, to be exact.

Bullock-Singer carried Larry down to the rocks at the water's edge while Kane carried a bowl with three cans worth of tuna in it - she figured Larry would be mighty hungry after two months in a tank with nothing to eat. Bullock-Singer used the scissors they'd brought to cut the elastic bands that had long bound Larry's claws - and what appeared to be electrical tape that was also applied to his oven-mitt-sized claws - while Kane emptied the bowl of tuna into the water where they'd soon release Larry: Kane carefully picked him Larry up and, after saying goodbye to him, gently put him down in the water, just barely deep enough to cover him and the tuna he now sat on top of, in a tiny little cove not much larger than he was: And then, well, Larry just sat there. A couple of marine biologists had assured the women that the move from basically room temperature to the much colder ocean water would not hurt Larry - he is, after all, cold blooded and has a hard shell - but was he sitting there getting used to freedom, or eating the tuna or just dying in front of us?

We watched him for about ten minutes. Occasionally, we'd see him move a leg or even a claw, but he was awfully still.

And then, a small wave came in. Maybe it had the scent of something he likes or made him realize he was no longer a prisoner in a tank. He straightened out and began to scuttle forward, out towards the open water, scattering tuna flakes in his wake. In a couple of minutes, he was past the rocks and out of view - he was, again, able to seek his own destiny.

A survivor like Larry deserves to swim free and make lots of other survivor lobsters.

Would have been interesting to install a transmitter on the dude, though.

Time was kind of the essence. Roche Bros. wouldn't let Kane reserve the lobster by phone and she was worried that somebody else would get there and buy and eat him.

Time was not of the essence

The family has been visiting the lobster we called "Big Arm" for the past month or so. No one was going to be buying him until summer, if at all. I'm willing to bet the store was happy to be rid of him.

Big Arm or Larry or whatever was a bit of a bully in the lobster tank. He would go after the other lobsters constantly. Last week-end, I swear I stopped him from taking out a smaller resident of the tank by yelling at him. It's only a matter of time before he is bullying the sea life in Dorchester Bay. And then he'll get caught again, but that's another story altogether. In any event, we'll miss him.

I love this story so much. Hopefully Larry evades future fishermen and can live out the rest of his days in peace in the Boston water.

May he grow too large for traps

There is such a thing - too large to get into the traps. These are the ones that divers treasure but usually don't bother. The legendary giant ones.

Lobsters don't age in the mammalian sense of things - and are near immortal if they aren't predated by humans or other sea life.

File under "Compassion" <3 Thank you, Karen Kane! Please don't stop there, rescue as many as you can.
{how anyone can boil a living creature to death defies comprehension}

I brought a gallon of milk back to a farm

The cows didn't want it, they just looked at me like I was nuts.

... already been taken and disposed of so you could drink their milk.

They could probably smell the veal on my breath.

... already been taken and disposed of so you could drink their milk.

Are there a lot of lobsters in the harbor?

I guess it's a rocky habitat and all...

Don't know about "a lot"

But there are enough for the MWRA to monitor.

Now there is one more.

Pinchy would've wanted it this way.

Lobster aquaculture lab former volunteer here. The posture of the animal on the scale was defensive - tail tucked. Lobsters pee and communicate via hormones from their faces, donchaknow, and tanks crowded with lobsters are extremely stressful for all of the animals. The immobility of the lobster when placed in the harbor water was probably based on being immersed in entirely different water than from the tank, from the shock of the temperature change, and from the shock of being handled and placed in a new environment. Given that he moved off in under an hour is a pretty hopeful sign. Given that there are many, many traps in the harbor and that this animal has a definite history of visiting traps makes it likely that he'll be caught. A transmitter would only work until the animal shed - the exact reason that no one can accurately age a lobster in it's natural habitat.

NEAQ releases its lab eggers back into the harbor after hatching, shedding and recovering shell hardness. However, their tails are notched so that they are thrown back if caught. My own egger namesake went down into the briny deep on her release giving the lobster equivalent of the finger, and she used to stalk me as I cleaned her tank mate's area. I love 'em, but I also love to eat 'em!

The water temp rise in the harbor is affecting the number of lobsters, and not for the better.

Feeding a lobster canned tuna is weird. An old raw rotten flounder or skate is probably more to Larry's taste!

But, it's the thought that

But, it's the thought that counts.

We used to bait dungeness crab traps with tuna or pet food. Worked like a charm. We would often pull up a couple of sated crabs of legal size and toss it down again without new bait.

Can't see lobstah being much different in their preferences.

Just imagine how many crabs you would have caught if you used proper crustacean bait!

By now the thing is probably

By now the thing is probably dead. Nature is not a Disney animation.

there is a rule that half the

there is a rule that half the animals released into the wild survive. however that is all animals, mammals birds fish etc.

You need to solicit donations

You need to solicit donations to buy a 5 and a third pound lobster ? According to Grub Street, Roche Brothers West Roxbury store is selling medium/large for a very reasonable $9.99 a pound. That would have cost about $54 ... so where did the almost $95 figure come from ? That would put the price at a slightly harder to swallow about $17.50 per pound. Maybe if they had enlisted the help of a math teacher they would have been able to save more (money or lobsters, take your pick.) Was this whole shenanigan a backhanded way to draw attention to teacher pay ?

Could I have made a mistake?

I looked at the scale in the photo and it read about 5.4 lbs., but maybe the lobster hadn't fully settled in at that point, so maybe it weighed more?

But I was also standing right at the register when it rang up about $95, so that's what she was charged - which we all thought was a bargain since the store had originally estimated Larry would cost $150.

As for your last point, please. This is not Oklahoma (for one thing, we have live lobsters!), Larry's liberator was doing it simply to help the poor creature. There was another person who was planning to free Larry who (as far as I know, but what do I know?) is not a teacher; Kane just got to Roche Bros. first.

They have live lobsters...

at grocery stores in Oklahoma. And pretty much everywhere in the United States. Surprisingly the state is populated by more than poor teachers.

The guy who runs the seafood department on Saturdays did point out the value of freeing several of the smaller lobsters instead when I saw him, but the logic of buying the bigger one is probably similar to the logic of pricing them differently.