DA: Not sure whose shootout bullet killed Mattapan woman, but it doesn't matter - both alleged combatants now charged with her death 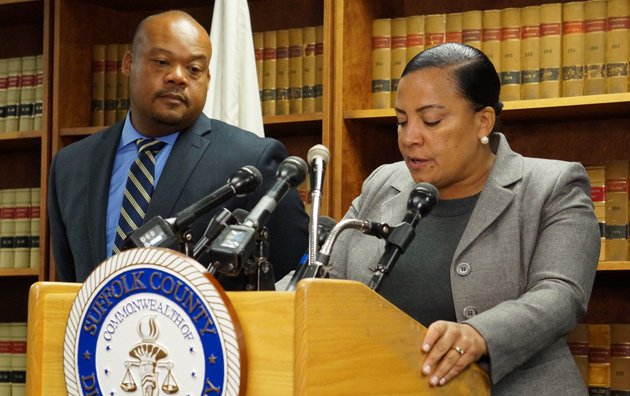 Four men now face charges in connection with the shooting murder of Eleanor Maloney, 74, as she stood outside her Mattapan Street home on April 6 enjoying a warm day with other members of her family - including her grandson, Anthony Davis, one of those four men, arraigned today on charges that include first-degree murder.

A second man, Henry Dane, of Roxbury, also faces first-degree murder charges for the gun battle that erupted after the two got into an argument that afternoon, Suffolk County prosecutors say. Another man, who was in a car with Dane before the shootout - in which Dane and Davis allegedly exchanged a total of 16 rounds - was charged with lying to police, while a fourth man, also in the car with Dane, was charged with evidence tampering because he allegedly tried to hide Dane's gun from police, prosecutors say.

Although prosecutors initially said it was one of Dane's bullets that killed Maloney, Assistant District Attorney Masai King said at a press conference today that whichever bullet killed Maloney went through her head and wound up somewhere else, making it difficult to prove which of the two fired the fatal shot.

But at a press conference after Davis's arraignment, King said the two can both be tried for first-degree murder under a legal theory known as "transfer of intent" - both men were trying to kill each other and so the fact that an innocent third party wound up dead means both can share the blame. In the gun battle, DA Rachael Rollins said, Dane shot Davis in the leg, shattering his femur, and Davis shot Dane in the arm.

King, who is leading the murder prosecution, said it remains unclear just what Davis and Dane argued about about after Dane and the other three men pulled up in front of Maloney's house - let alone whether they even knew each other before they both pulled out guns and began firing.

Rollins praised tips from the community for helping Boston homicide detectives and her office compile the evidence needed to charge Davis and Dane, as well as Khamal Watson, technically charged with witness intimidation for allegedly lying to police, and Chinonso Nwosu, charged with being an accessory after the fact. At Dane's initial arraignment, on a charge of manslaughter, King had said Nwosu tried to hide Dane's gun under a pile of leaves down the street from Maloney's home.

Rollins said work done by her office and by Mayor Marty Walsh and Police Commissioner William Gross is slowly convincing residents "to trust us a little bit more" and come forward with information that could help lead to suspects and court cases.

And Rollins praised Maloney, a retired operating-room assistant whom neighbors called "Ma" and whom Rollins called "a beautiful woman" and "fierce protector of her family," who she said was robbed of her life. Rollins said she "can't imagine the pain and hurt" her family is now going through, with their matriarch dead and her grandson now charged with her murder.

"I can't imagine [Davis] would ever have wanted his grandmother to die," she continued, but also blamed him and Dane for her death, because of their "callous disregard" for "anyone else but themselves."

Davis has a lengthy record that has him officially classified as an armed career criminal and a habitual offender, but prosecutors declined to discuss details of that record, saying they were concentrating on the facts of April 6.

Rollins said that, in terms of prosecuting him for first-degree murder - which carries a sentence of life imprisonment without parole - it will be his actions that day that decide his fate.

She added that the intense amount of work prosecutors and detectives have put into this case highlight the reasons she came into office vowing not to prosecute people charged with certain non-violent offenses: The time freed up from such cases lets investigators spend more time on crimes such as Maloney's death. "We want all our attion on non-fatal shootings and homicides," she said.

Our judicial system is failing us.

There's nothing more serious than...

First-Degree murder. This was a truly heinous crime and I hope justice will be served.

Don't need much more info than that. This s^@thead shouldn't have even been on the streets. Our court system is too lenient in this state.

And the comment from Rollins says a lot. "I can't imagine [Davis] would ever have wanted his grandmother to die,"..WTF? What the actual [email protected]%K does that have to do with anything? This loser is in a gun battle and you think he gives a shit about anyone? He was trying to kill another man and she sees fit to give him a pat on the back for not meaning to kill his grandmother. Good lord.

Facts, he is a fu#$king lowlife who probably should not have been on the streets anyhow. At least now we won't have to see him for a while. At least until some bleeding heart parole board member tries to make a case that he has been "reformed" in prison.

Lock him up, throw away the key.

Giant mulch pile bursts into flames on the Mattapan/Roslindale line
After teen shot on Mission Hill, three arrested with a gun in a car matching one seen fleeing the scene, police say
Bullet into kitchen, car damaged in gunfire off Delhi Street in Mattapan
For second time this summer, human remains found in Franklin Park
Why so many unpaved roads?
Fish not the only thing you can catch in Franklin Park's Scarboro Pond