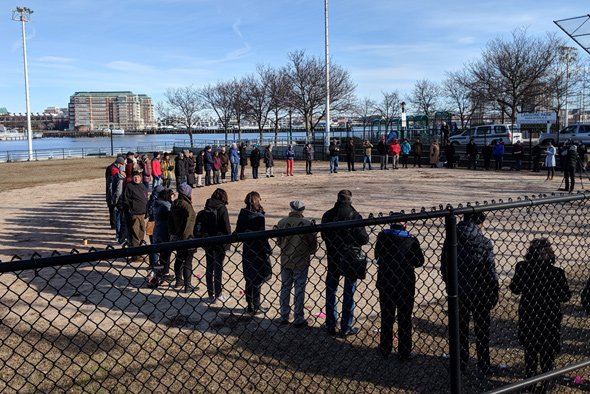 Bostonians this morning lined the perimeter of the Purity Distilling Co.'s leaky, 50-foot-tall molasses tank, which burst around 12:40 p.m. on Jan. 15, 1919, creating a gooey flood that killed 21 Bostonians and a number of horses and destroyed buildings in its path.

The same spot 100 years ago - looking towards the elevated that then ran over Commercial Street, after more than 2 million gallons of molasses poured out (1919 photos from the Boston City Archives molasses collection): Parks Commissioner Christopher Cook recited the names of the dead as city Archaeologist Joseph Bagley and other Bostonians listened.

People observed a moment of silence for the dead. Flattened by molasses, in photo taken on Jan. 15, 1919 from the Commercial Street el: Historian Bernard Trubowitz came dressed as a worker of the day (although, he said, more like a rail worker than a molasses worker): People who attended the commemoration knew where to stand thanks to UMass Boston researchers, who used a ground-penetrating radar to determine the exact perimeter of the tank, based on echoes they found about 20 inches below what is now a Langone Park baseball field: At the park's entrance on Commercial Street, a bottle of molasses paid mute witness above the small plaque that is our only official permanent remembrance of the disaster: An elevated train passes the tank in 1916: The elevated after the tank collapsed: The Fire Department used powerful hoses to try to wash all the sticky molasses into Boston Harbor, but, of course, the story goes that Bostonians could get a whiff of the stuff on warm summer days for decades after. The molasses stored in the tank was destined for purification at a plant in Cambridge. Coincidentally, one day before the 100th anniversary of the flood, there was a significant fire at almost the exact site of the plant (one block to the east).

Video - The Physics of the Boston Molasses Flood

I found this video informative:

Puleo's book "Dark Tide" is an excellent book about this.

What did the Radar find?

Are there still footings for the tank 20" below the surface?

Yes, according to the people who put on this ceremony

It shows up on LIDAR, too

I've seen some of the LIDAR scans of the harbor as part of surveys for climate-related sea level rise hazards. I noticed it then, but wasn't sure what had been there.

Sure, blame the tank

Not the engineers who designed it or the people who built a grossly inadequate structure.

Thank you for this, Adam!

Could they build a monument instead of an ordinary city sign?

In addition to the plaque remembering the deadly event, Langone Park will be undergoing a $7 million renovation as part of the Mayor Martin J Walsh’s “Resilient Boston Harbor” plan to increase access and open space along the city’s 47-mile shoreline and to protect the city against major flooding.

I hope the $7 million includes an upgrade to the memorial. While I'm all in favor of government efficiency, the commemorative sign at the disaster site is rather spartan and seems to be of the same material and color as an ordinary city sign. 21 deaths, mostly city workers including a firefighter and several city paving laborers were killed. All of the names should be engraved on a small monument, perhaps in the shape of the tank. There are plenty of monument shops around that would probably donate it. I know the Langone family was active in community affairs (and funerals) in the North End but a name change to Molasses Memorial Park should be considered.

Any progress on the Coconut Grove Memorial, also long overdue? Both disasters led to building and fire code changes that no doubt saved many lives over the years.

If it had been a water tank,

If it had been a water tank, no one would care now. It's the molassas that gives it the 'cool' factor.

The Secretary of State's office has posted copies of the victim's death certificates. Some people died from the force of collapsing buildings (or the tank); others basically suffocated in molasses.