Nobody grouses as board approves new apartments, condos on Heron Street in West Roxbury 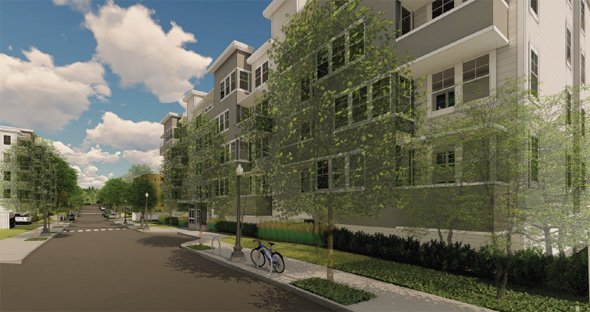 The Zoning Board of Appeal yesterday approved a builder's plans for an apartment building on one side of Heron Street in West Roxbury and a condo building on the other.

Peter Heaney's proposal calls for 40 rental units in one building, with 33 parking spaces in a garage and 5 at spaces at street level, and 32 condos in the other, with 24 garage spaces and 9 street-level spaces. Five of the apartments will be rented as affordable; four of the condos will be sold that way; Heaney will also pay $72,000 to a fund maintained by the BPDA for increasing the number of affordable housing units in Boston.

Heaney said that as part of the project, he would rebuild Heron Street, which is currently in bad shape.

The two buildings are the latest of several new projects along Washington Street south of Lagrange.

In June, the board approved plans for 29 single-family homes on two new roads to be called Starling Street and Toucan Road. Another developer is currently finishing up a 46-unit building at 4945 Washington St., where AJT Supplies used to be.

... is really nothing to crow about.

This looks like a very good project. I am pleasantly surprised the parking ratio is not wildly out of whack with what is being built considering people in West Roxbury usually demand much more parking that is needed.

There will be even more demand to extend the dedicated bus lane out to Dedham from FH seeing as we're added hundreds of residents to the Washington St. corridor in the coming years.

Or, knowing Dedham, to the WR town line.

Great point. All for it.

Great point. All for it.

Yesterday, I made the mistake of driving home from Dedham at 5:30 via Washington Street. It was gridlocked from the Parkway to Beech Street going inbound. And yes, people were driving in the bike lane.

In a perfect world, the T would bore a tunnel up Washington Street from Forest Hills until at least the Dedham Mall. That corridor has seen a lot of growth, so it deserves it. Of course, these things cost money, and that's something the T is short of.

That the lane inbound would end up full of cars, some making the right on Beech, others just wanting to beat the other cars because, in their minds, their time is more valuable than those in the left lane. On the other side (of the street/intersection) the bus lane would be full of people making quick runs to the restaurants on the way home from work, thereby rendering the lane a parking lane in essence. That's why the city has never done anything about the PM rush on Washington Street.

Right down the median strip - which is a leftover from the days when trolleys ran up and down it.

For a project located on a Bird Street

It seems quite odd that the rendering is missing the ubiquitous birds. Perhaps the street itself counts.

They're in the see through

They're in the see through trees that cast solid shadows.