Readville kids get a revamped playground 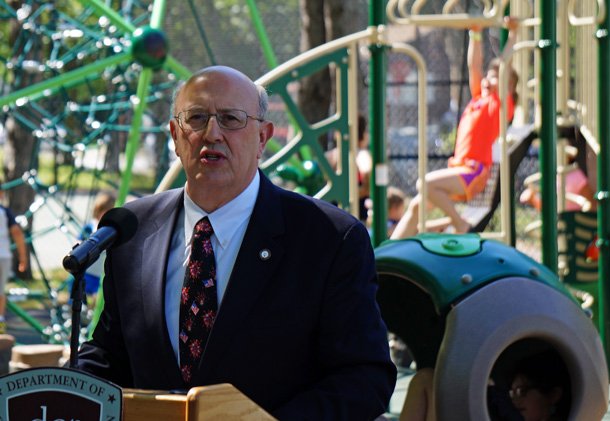 State officials held a formal dedication for the new playground at Camp Meigs Playground in Readville yesterday - complete with the ceremonial cutting of a red ribbon with large golden shears - but the kids in attendance mostly paid no attention at all, because they were too busy playing on all the cool new stuff.

DCR Commissioner Leo Roy praised the work of DCR employees who got the new playground at Hyde Park Avenue and Stanbro Street up and running. He also praised the state's new environmental-affairs secretary and explained to the crowd that she had, for the first time in state history, merged a hazard-mitigation plan and a climate-change plan into one single overall plan.

State Rep. Angelo Scaccia declared Roy to be Gov. Baker's best hire ever and said Roy was a good friend of Hyde Park, whose visits to the neighborhood always herald good news. He exclaimed that Roy has made sure Hyde Park has "the most beautiful parkways not only in the city of Boston, but in the entire state."

As Roy and Scaccia talked, the neighborhood's resident angry guy, adorned in a Civil War hat, periodically yelled out insults at state and city politicians not named Scaccia. Later, he started yelling "Fake news!" at a reporter from the Bulletin.

The playground is named for the army camp where members of the famed 54th Massachusetts and other black units trained before heading south during the Civil War. Several 54th Massachusetts re-enactors attended the dedication. Camp Meigs was located on what later became the large industrial and warehouse complex where the Stop & Shop warehouse used to be not far from the playground. One of the new attractions at the playground is a tent-like frame, built specifically in homage to the bivouacs used by the soldiers as they trains at Camp Meigs. Another attraction is a large climby rope thing: You had one job

Interview the schmuck in the civil war that.

Because the interview would have gone:

Repeated over and over for about three minutes until he realized there was somebody else he could scream insults at - like maybe a nearby squirrel (or the cops, whom he yelled at for not doing something about Walsh).

Note: I'm assuming you're referring to the "angry resident" I mentioned, not the 54th re-enactor I took a photo of, who said nothing untoward.

Yes, the wet blanket who was being disruptive during the proceedings.

Fun stuff or no?

Hopefully the Roslindale design group didn't get involved with this one...

Kids seemed to be having a grand time

You can barely tell

Kids seemed to be having a grand time

You can barely tell

The article should have been named something else.

Excited to see this. Now

Excited to see this. Now where is the damn dog park?

DA: Hyde Park man shot would-be marijuana customer in the stomach, then kept firing as the victim and his friends tried to flee
Man arrested for Hyde Park murder in December
Advocates look to new state environmental law to help keep cliff, woods from being dynamited for suburban-style apartments on Hyde Park/Roslindale line
Man shot in the leg on Garfield Avenue in Hyde Park
First a fire and now gunshots on the edge of a forest in Hyde Park
Boston firefighters make short work of Hyde Park garage fire