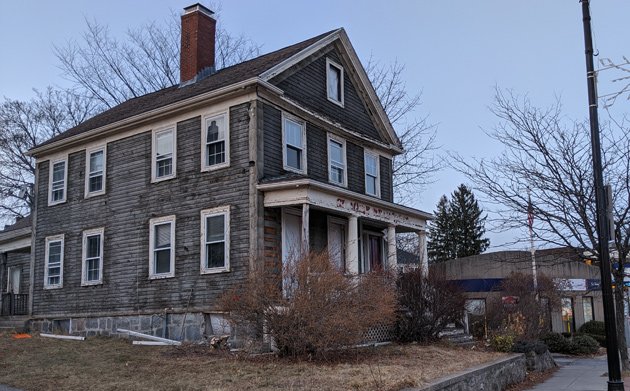 A Canton builder has purchased two abandoned buildings on Centre Street, at Park Street, in West Roxbury, both of which it wants to bulldoze.

CAD Builders has yet to signal just what it will do with the two Centre Street parcels, now home to the old Gilmore place and the neighboring post-apocalyptic former banking bunker at the corner of Park Street. However, it's filed requests with the Boston Landmarks Commission to demolish both buildings - a required step with any building more than 50 years old. People who might object to the demolitions have until Jan. 10 to tell the commission why or forever hold their peace.

In September, CAD Builders paid $1.1 million to buy the old Gilmore place from a Norwood concern that in turn had bought it a few months earlier for $915,000 from Roslindale landlord Vinny Marino, who had earlier acquired it from the Gilmores, according to Suffolk County Registry of Deeds records. A month later, CAD Builders paid $1.3 million for the former bank branch from Rockland Trust, which shut it after it acquired Blue Hills Bank, which had a much larger branch across the street.

The two parcels in total make up about a third of an acre, or 14,658 square feet. By way of comparison, another developer put 16 condos and commercial space in a four-story building at Centre and Willow streets, across from Roche Bros. an old classic like the Gilmore place demolished; I can see the logic of replacing it with 29 single family homes. Sometimes you have to let go of the past to support the future.

that single fam has been

that single fam has been looking ROUGH in the past few years - even if they wanted to rehab it, it's kind of questionable how much is recoverable from the original materials - and if you're stripping it to the studs anyway, it's not really saving the original, is it?

The 29 houses are going in a different development. The developer hasn't signaled what they plan to do with this. Some kind of housing with retail on the ground floor seems to make the most sense. (That or a parking lot, but CAD didn't pay $2 million to put in free parking.)

post-apocalyptic former banking bunker at the corner of Park Street.

Is the cognitive dissonance too much for you? Don't worry. Lenin felt the same way as you about brutalism.

"Lenin felt the same way as you about brutalism."

I don't think Lenin had very strong feelings about brutalism, given he died about 25 years before the movement got started.

I did play fast and loose with terms, yes.

I don't think Lenin had very strong feelings about brutalism, given he died about 25 years before the movement got started.

Lenin had to deal with the futurists in his time. 40 years before brutalism was a coined term, the artists and architects who ushered in brutalist style were avant garde futurists

Cue the usual West Roxbury NIMBYs complaining about any and all progress anywhere in their “town.”

Horror, people being involved with their neighborhood and it’s future.

That’s not it. Try again.

That’s not it. Try again.

C'mon already. There is a massive housing shortage. Don't be dense. Build dense. 3-4 stories with commercial on first floor sounds excellent. We can't be wasting large parcels like this. Plus single family zoning is terrible for the environment.

He didn't pay $1.1 million for a single family in need of a gut renovation with plans to restore it to it's former glory. This isn't Cambridge.

hopefully those 3-4 stories have actually afordable housing. they're charging 650k for fucking apartment-sized CONDOS in that new building across from starbucks on centre - and of course they're all still on the market despite the building being done for ages now. I'm all for density but there should be a time limit between the building getting done and people moving in, and if the developer takes a hit on his millions of dollars in profit so actual working people can live in these places, so be it

yeah, they're priced too high

yeah, they're priced too high, that's why they're empty. except developers are allowed to write off losses on uninhabited units as income loss and all kinds of other financial trickery so instead of lowering their prices, which is what supply and demand SUGGESTS they do, they can still make money even with the damn things empty, just waiting for a sucker

The building is actually well

The building is actually well over 50% sold (some still pending an upcoming closing) many more which closed recently so their sales prices are now public record.

So true look at all the empty

Where are you getting that from?

Huh? Nowhere in the article does it state there will be single family homes built on the two lots. It will most likely be ground-floor retail with condos above it, given its location.

The company's big West Roxbury project is a subdivision of single-family homes on the other side of the neighborhood, maybe I didn't make it clear that that doesn't mean they plan to build single-family homes on Centre Street (which, as others have noted would be kind of dumb - the lot isn't large enough for more than maybe two houses and there's no way they could recoup their acquisition costs that way).

Cue the WRSA aka chronicles of WR...

Can’t wait for the geniuses of the West Roxbury Safety Association to pivot their pedestrian safety expertise into building safety and deem any development here unsafe.
You can’t put a building that close to the road! Where will the pedestrians leap for safety when drivers weaving at 40 mph on their four lane highway jump onto the sidewalk?
You already can’t always get a parking space directly in front of the store you’re going to! No more new people! Because of safety! Really, safety. That’s what it’s about.

Looks like another big box made of Legos will be approved by the ZBA and stand on this site. When will this city develop a plan to keep and bring back families to the city?

This is a double lot on the edge of a busy commercial street. I welcome your thoughts on how to turn this into housing for families.

Have you ever driven around Boston? Huge swaths of the city are filled with commercial on the first floor and 3-4 stories of residential above.

Boston has a glut of 3-4 bedroom homes.

What Boston needs is smaller units for singles and doubles and smaller families - studio, 1, and 2 bedroom units.

That would pull singles out of the larger units, freeing them for families.

But do you really want families? They tend to use more tax money than they supply. That's why "vasectomy" housing is popular for communities on the I-95 circuit around the city - no school kids.

Simple structure with an

Simple structure with an architectural symmetry that is pleasing to the eye. One by one these modest gems are disappearing in the name of LUXURY condo development.

" pleasing to the eye"

A nice, warm, charming aesthetic is what Center St is losing - and arguably has lost a lot already. The kind of feel that makes you want to walk from shop to shop, rather than drive to one shop, park in front, do whatever in that shop, and then leave. And if you don't get a spot in front, you drive right past all the shops.