Even in a high-crime part of Dorchester, seeing two guys shake hands after one jumps a fence for a quick meeting is not enough to warrant pat frisks, court rules 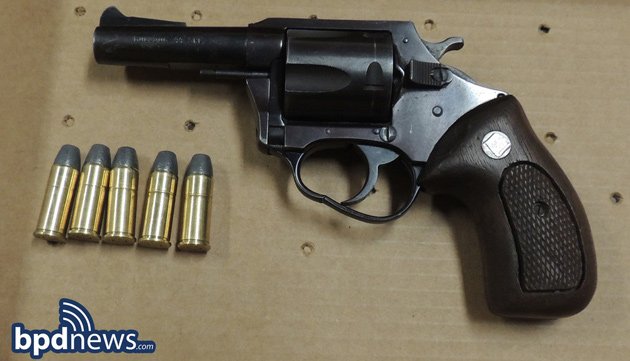 No longer allowed to be used as evidence: The gun and bullets police say they seized.

The Massachusetts Appeals Court ruled today that Suffolk County prosecutors cannot use a loaded gun allegedly found on a Dorchester man as evidence against him, because police found it under his puffy coat and sweatshirt during what it ruled was an unconstitutional pat frisk.

At issue were events shortly after 1 p.m. on March 2, 2016, at the intersection of Wales Street and Talbot Avenue in Dorchester, where BPD drug-unit officers were on patrol to investigate possible drug dealing in the area. They spotted one man jump over a fence and shake hands with a second man, while a third man stood just a few feet away, looking around and then, after a couple of minutes the first man jumped back over the fence while the other two walked into Harambee Park.

Thinking he'd just spotted a drug deal go down - with the third man acting as a lookout - a drug-unit officer radioed to have the two men stopped, according to the court summary of the case. The officers who stopped them patted them down. They found nothing, but when the drug-unit officer arrived, the alleged lookout guy, James Kearse, was acting pretty fidgety, and one of his puffy coat's jackets was sagging, as if it held something heavy , so the officer did his own pat frisk. He reported he didn't feel anything through the puffy coat, but then unzipped it and this time felt a hard object under Kearse's sweatshirt that turned out to be the butt of a loaded Charter Arms .44 caliber Bulldog Revolver, according to a police account.

Before he could come to trial, Kearse's attorney sought to have the gun and bullets tossed as evidence as "fruit of the poisonous tree," that police found it only because of an illegal search because officers had no reason to pat frisk Kearse without a warrant - that two guys shaking hands in Dorchester alone is not enough to warrant frisking.

In its ruling today, the appeals court agreed, that while observations in a high-crime area - even one with "frequent stabbings, shootings, and drug activity" as police described that intersection - are one reason for a warrantless search, they need to be coupled with other evidence of a potential crime has either just occurred or is about to, and that police failed to provide that.

It is not necessary in cases such as this that the police officer observe an exchange of items or actually see drugs or cash, but it is necessary that the observations by the police occur in a factual context that points to criminal activity. See Commonwealth v. Levy, 459 Mass. 1010, 1011 (2011). Contrast Commonwealth v. Hernandez, 448 Mass. 711, 714 (2007) (reasonable suspicion existed where, prior to shaking hands, police observed defendant pacing back and forth in high drug trafficking area before giving person item hidden in his shoe). Indeed, "other than the normal social intercourse that occurs with some frequency on the streets of Boston's neighborhoods, nothing [the officer observed] supports the claim of conduct consistent with a drug transaction." Commonwealth v. Ilya I., 470 Mass. 625, 631 (2015).

The fact that Officer Leon was an experienced drug investigator, while relevant to an assessment of reasonable suspicion, is not a substitute for details about how drug transactions occur based on that experience. Compare Commonwealth v. Gomes, 453 Mass. 506, 511-512 (2009) (experienced drug investigator observed person who participated in hand-to-hand exchange of something also ingest something that was in his hand as police approached; officer explained that "drug dealers and users often ingested drugs to prevent the recovery of evidence"). Subjecting a quick handshake, without more, to the scrutiny of a nonconsensual police encounter is not consistent with the reality that "law-abiding citizens live and work in high-crime areas. Those citizens are entitled to the protections of the Federal and State Constitutions, despite the character of the area." Id. at 512, quoting Commonwealth v. Holley, 52 Mass. App. Ct. 659, 663 (2001).

What would have been legal at that point, the court said, was for police to conduct a "field interrogation observation" interview of the two men.

Briefs by both sides and audio of oral arguments.

It must suck to be a cop when evidence like this is tossed.

But the law is the law.
Trying to get illegal guns off of the streets is hard, passing more gun laws which people who have illegall guns won't abide by is easy.

Cops don’t care that much to be honest.

Is what it is. You tell the truth as to what happens and the cards fall as they may .If all of a sudden gangbangers start wearing puffy coats because of this ruling, a judge down the road will allow cops to unzip puffy coats on pat frisks.

If they didn't want evidence thrown out

Its not like they are going to give him his gun back right? He can't legally posses it.

That is correct sir

One more gun off the street just without an arrest.

Now they should just be arrested for shaking hands.

So, reasonably, Kearse gets the Bulldog .44. back. Right?

He'll just get another.

Win some, lose some. One less illegal firearm. That's a win!