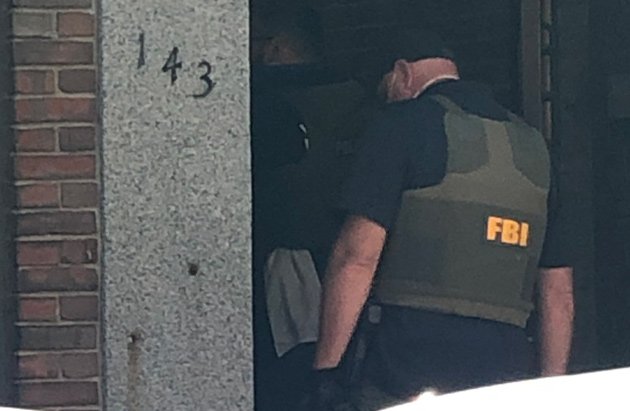 The Globe reports FBI agents who spent the day searching an apartment at 143 Fulton St. were looking for evidence related to the activities of Trevor Lucas, released last summer from a federal sentence for driving to Wisconsin to try to kidnap at gunpoint a teenager with whom he'd had a disagreement in the "World of Warcraft" game in 2009.

Lucas, 30, was arrested today and was scheduled to face a hearing on whether he should have his "supervised release" after he was let out of prison revoked. Court records have yet to be updated with the status of the hearing this evening.

According to court records, in 2011, after 18 months of planning, Lucas, then a Gloucester resident, drove to Madison, WI to confront a 17-year-old with whom he'd had a disagreement in the online game. Prosecutors say Lucas made sexual advances towards the teen, who then put him on an "ignore" list. Lucas got the teen to stop "ignoring" him on payment of $5,000 in game currency, but then he started the advances again, the teen put him back on the list and refused to give Lucas his game currency back.

After digging a couple of holes in the woods in Gloucester that were large enough for a body, Lucas drove to Madison with "an arsenal of weapons, restraints and rubber gloves." When he knocked on the teen's door, though, the teen's mother answered. He pointed a gun at her, but she screamed and slammed the door on him and he drove away - he was arrested by Massachusetts State Police on the Massachusetts Turnpike in Weston.

Lucas pleaded guilty to one count of brandishing a firearm during a crime of violence - prosecutors dropped an attempted-kidnapping charge as part of a plea - and a judge sentenced him to 17 1/2 years in prison - later reducing that to 11 1/2 years.

His lawyer had asked for a sentence of just seven years, arguing that Lucas had Asperger's Syndrome, attention deficit and bipolar disorder and that his cross-country trek may have been sparked by complications of a drug he had been prescribed for sleep apnea. Also, the lawyer argued, the holes he dug in Gloucester were too long and not deep enough to serve as burial sites.

Some of the agents seen entering and leaving 143 Fulton St. today wore shirts identifying them as members of the Hazardous Evidence Response team, which often responds to incidents and scenes that potentially involve weapons of mass destruction. However, the FBI said the public was not at risk.

According to Tonya Alanez of the Globe

"Violent Crimes Task Force coming and going from 143 Fulton in the North End. No specific reason yet known." (per her Twitter account)

"Tied to Man With A Troubling Past"

Trevor Lucas 31, who has history of kidnapping and weapons charges, according to the Globe website.

Gloucester to Madison over WOW

Imagine being a grown man so completely enraged by an online interaction with a TEENAGER, you dig human body sized holes in the woods, and drive nearly EIGHTEEN HOURS with a mini arsenal in tow, just to show how tough you are or something. That's absolutely insane.

aspergers is no longer a

aspergers is no longer a valid icd-10 diagnosis code since 2013.

thumbs up. whoops. i

Why did the mom drive away?

I mean, she left the guy with a gun with her kid. Still, glad Lucas was caught.

I think she slammed the door of her house and he drove away. That's how he was arrested in Weston.

he was the one who fled

"While police were en route, DeSpain said, Lucas returned to the house and pulled a gun on the woman, then fled when she pushed the door closed and screamed."

But the author of this particular piece wrote-

He pointed a gun at her, but she screamed and slammed the door on him and drove away

In that sentence, who drive away?

Taps on the Prado
Like Venus rising from the sea, if Venus were a bridge across the mouth of the Charles
Wall of North End residence collapses
Old North Church re-opens to visitors on Saturday
Bostonians really did tar and feather people
Two North End restaurants get OK to expand