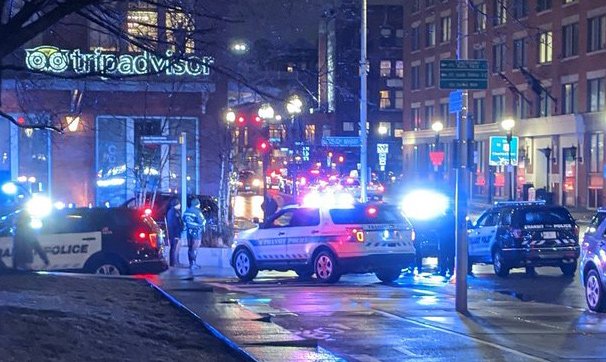 Transit Police report that motorcycle cops trying to stop a guy they say was driving erratically down Causeway Street yesterday afternoon weren't able to stop him before he crashed into 226 Causeway St.

Police say the motorcycle officers began trying to stop Gustavus Beverly, 52, of Dorchester, around 5:50 p.m. After he crashed his Ford Explorer into the building, between North Washington Street and I-93, he got out and tried to escape on foot, but proved no match for the cops on bikes, who stopped him on Medford Street, police say.

In addition to erratic-driving charges, police say, Beverly was already wanted on outstanding warrants from Roxbury and Dorchester courts for a variety of charges, including assault and battery, strangulation, assault and battery with a dangerous weapon, criminal harassment, three counts of disobeying an abuse-prevention order, threats to commit a crime, witness intimidation, malicious destruction of property and larceny under $1,200.

Bad job if you didn't notify BPD about the pursuit through crowded city streets.

Gustavus has quite a resume. How do you have multiple warrants for offenses of that nature and manage to be out and about? Is he actually Gus Tavus from Beverly, so we have been looking in the wrong places?

In other West End news

Coronavirus cases increasing rapidly at area hospitals
Mass. General doctor who rides his bike to work has it stolen; asks for it back
If Billie Eilish still plays the Garden next week, her merch vendor has a court order to go after bad guys selling unauthorized items on Causeway
Did the woman in 'strict isolation' at the hospital with a bad respiratory infection have coronavirus? Who knows - the hospital didn't have enough test kits to find out
Hospital physician: The possible coronavirus patients keep coming, but we don't have enough tests for them all
One stabbed, one punched in face in Friend Street attack, police say