Back in the day, you could journey here for misfit and uncalled for clothing 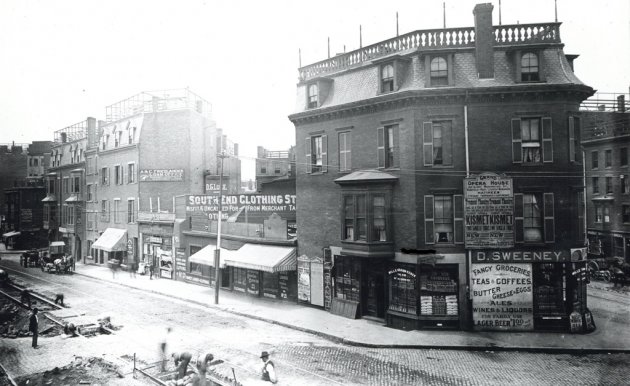 Neighborhoods:
Boston
Topics:
History
Ad:
Like the job UHub is doing? Consider a contribution. Thanks!

What you are looking at now right about where is the Doubletree Hotel in the former Don Bosco school with the Y being on the right. This is about 1896.

Heaven forbid that tunnel that they are about to build on the left and which is still there could ever be used for trolleys from South Boston, Roxbury, and the South End.

And yes, there is of course still a live tunnel there which could spit trolley cars onto the Silver Line.

At the idea of the T spending a dime to bring rail transit to neighborhoods where the brown people live. Over a half-billion dollars for the Silver Line to the Seaport and the South End/Dudley/Nubian gets fancy bus shelters and a new name for the 49 bus.

There's a neighborhood that is getting less and less "brown" and has been since right after they took the elevated down.

I know I said it would be great for trolleys to once again run through the Pleasant Street incline. South Boston and the South End are lost to the moneyed class, Roxbury is on its way. If I owned a home on Humboldt and I was nearing retirement age, I would be rooting for the trolley. South Carolina and cashing in on the nest egg beckons.

If I was a renter on St. James and the trolley came down Washington, I would be nervous as hell.

North Cambridge and Davis Square were working class until the Alewife extension was put in, as was JP until the Orange Line was moved and rent control was abolished for the connected in Cambridge.

When the Big Dig mitigation was worked out, one of the calls for it was to serve under served working class areas of Somerville with the Green Line Extension. How's that working out? Nearly every new development in Somerville in the past 10 years has been predicated on the GLX coming. Guess where that working class is now? They are shopping at a Market Basket in Billerica because rising rents forced moves.

Hate to say it, but better transit displaces working class people. JP is the absolute case study in this. Anyone who has moved to JP or Somerville in the past 20 years and is concerned about what is causing displacement, go to the bathroom and look in the mirror.

This is what happens in areas with generally bad transit, yes. Most of New England is super car-dependent.

It doesn't happen to the same extent in areas of the world where nearly everyone has access to robust transit.

Don't cast too many stones there blow into the Bury.

The South End was early in the process of gentrification and certainly not as white as it is today. That time frame is relevant when we're talking about the planning process for the Silver Lie as the T announced in 1989 that trolleybuses would replace the former El.

I lived on Appleton Street starting 30 years ago. It had been majority yuppie for a while.

The area around Peters Park, yes was really undeveloped until the late 90's but anywhere on the Back Bay side of Tremont north of Worcester, outside of MethUnion buildings was fairly Doug and Tim or Caleb and Corrine by 1990.

You'd probably just walk up to the Orange Line rather than down to Washington Street. Blackstone Sq. was super sketchy back in those days. Hookers used to turn tricks on my block in what has now been rebranded (by GTI Properties) as SoWa.

The address looks to be

21 Shawmut Ave. Funny to see it called "South End" since that's the edge of Bay Village/Theater District today. Eliot Norton Park is there today. Those buildings were gone by 1900 so I'm going to say some time in the gay '90s.

Made up names starting when the pike was pushed through in the early 1960's so as to separate them from the South End and to give specific areas Urban Renewal justification.

Yes, the New York Streets had names of New York towns and cities but that was really a developer's push because the railroad was going to go to all those fascinating places in the Mohawk valley.

I always like to search for names of old stores I see in old photos and it is always interesting to see the response. I found nothing with South End Clothing store but very often I find leads on ebay of all places. Someone comes across grandmas old box of something and decides to put the old shopping bag up for sale or there is a post card.

Looking at the 1895 Bromley atlas

The street in the left foreground, with the construction on it, is Shawmut Avenue.

The street at far right, running at an angle behind the Sweeney store, is Tremont Street.

The street at right foreground, in front of the Sweeney store, and extending off to the right, is Warrenton Street.

Pleasant Street (later known as Broadway) is in the left background, crossing Shawmut Avenue behind the horse-drawn vehicles.

All of the buildings in this entire block, including the Sweeney store, the South End Clothing Store, and the brick buildings in the background with the Loan Office sign, were demolished to make way for the subway portal, and are not shown on the 1898 Bromley atlas.

The limits of the "South End" neighborhood have moved many times over the years. In the 1700s, the South End was around Milk and Summer streets. At a later time it was around what we now call the theatre district. So it's not unusual that this would be called the South End in 1895.

Today's mysteryphoto shows Shawmut and Warrenton St, circa 1896. You can see the street signs (which we marked out) in this high res version of the photo: https://cityofboston.access.preservica.com/uncategorized/io_8e221d71-c69...

We know the photo is about 1896, since this piece of land was taken by the city in the process of building America's first subway. This photo was likely taken to document subway construction.

I assume that the local history experts who have already posted are correct in their guesses about the year, and so spent some fruitless time trying to account for the “Kismet” sign. Neither the 1950s musical or the 1911 play it was based on fit the bill, and I couldn’t find any other references online.

So I am grateful to Matthew Peterson, who did find and post the answer on the Archives Twitter:

This was one of many comic operas composed by Gustave Kerner, who had quite the heyday in the 1890s-1910s. Sadly died of an attack of apoplexy.

Wu looks at banning fossil-fuel use in new development, major renovation projects
Time was, you could rent an apartment, then grab some donuts for the celebratory road trip in your Chevy Vega
BPD captain who had been on paid leave for more than two years cleared of most charges
Rats running amok through Boston; residents, councilors demand action
No matter where on earth they roam, people will know Boston is their home
Court to Quincy: Boston can rebuild its bridge to Long Island