One Winthrop murder victim was a retired state trooper, the other an Air Force veteran; killer may have targeted them because of their race 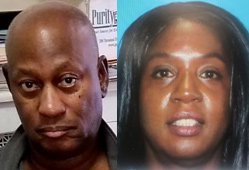 At this preliminary stage of the investigation, the excellent work of law enforcement has already unearthed troubling white supremacy rhetoric and statements written by the shooter. This individual wrote about the superiority of the white race. About whites being ‘apex predators.’ He drew swastikas.

“There is a growing national, and global, problem with extremism and white supremacy. The FBI believes the most serious domestic violent extremist threat comes from ‘racially or ethnically motivated violent extremists, specifically those who advocated for the superiority of the white race.’

“This shooter was married and employed. He had a Ph.D. and no criminal history. To all external sources he likely appeared unassuming. And then, yesterday afternoon he stole a box truck, crashed it into another vehicle and a property, walked away from the wreckage interacting with multiple individuals and choosing only to shoot and kill the two Black people he encountered.

State Police reported that Green retired in 2016 after 36 years in law enforcement. Green started as an MDC officer in 1980, then became a trooper when that police department was merged into State Police. He spent much of his State Police career at the Boston Barracks at Leverett Circle.

Trooper Green was widely respected and well-liked by his fellow Troopers, several of whom yesterday described him as a “true gentleman” and always courteous to the public and meticulous in his duties. From what we learned yesterday, he was held in equally-high regard by his neighbors and friends in Winthrop.

Police say both were shot multiple times by Allen, whom they say stole a box truck in Revere, then crashed into a house in Winthrop and ran away, firing at them as he tried to flee. The suspect was also shot dead after being confronted by a Winthrop police officer. At least two other people were injured in a car hit by the truck.

Rollins said her office will conduct an investigation of how a Winthrop police sergeant shot Allen, but said that she already considers him a hero:

When law enforcement arrived at the scene, they believed they were responding to a car accident. A thorough investigation will be conducted by our Discharge Integrity Team regarding the shooting of the armed suspect. The investigation thus far, however, indicates that the Winthrop Police Sergeant commanded that the suspect drop his weapon prior to shooting and immediately rendered aid. This Police Sergeant, like Trooper Green and Staff Sergeant Cooper, is a hero. The Sergeant stopped a volatile and escalating situation, saving lives, and protecting the community he serves.

Neighborhoods:
Winthrop
Topics:
Crime
Ad:
Like the job UHub is doing? Consider a contribution. Thanks!

The shooter, reported by authorities to posess white supremicist literature and had anti-Semitic writing on his hand, and undoubtedly aligned with the same political factions that scream both “back the blue” and “support the troops” spends his last minutes executing a retired (and beloved) cop and a USAF veteran.

nonwhites can neither be cops nor veterans, and the existence of such are abominations.

You gave your life to help others. God damm the clown who caused this carnage. Spare us from the drivel that he was turning his life around.

With the name of the second victim.

Homo sapiens do not divide into races. Race was a creation to rationalize and justify subjugation, suppression and murder of people defined as sub-human.

There is no black race, of yellow race or red race. There is no Jewish race.

David Green and Ramona Cooper were murdered because hatred of people who look different, speak different, follow different religions continue to be as American as mom's apple pie.

It sounds pedantic; a matter of semantics. Yet how we think is done in words. What we believe is confirmed or wittled away with the words we use to think.

Thinking in terms of human races gives people who need to hate a way to justify both their feelings and their thinking. Remove the rationalization of race and let that haters sit in the confusion of truthful language that denies their hatred and the emotional need to continue that hatred.

This extends to the holier than thou Evangelicals who knew exactly what they got during the Trump reign. Take away their self-deluding rationalization and let them stew in their own vile juices.

Thinking in terms of human races gives people who need to hate a way to justify both their feelings and their thinking. Remove the rationalization of race and let that haters sit in the confusion of truthful language that denies their hatred and the emotional need to continue that hatred.

Even if you could deprive them of this language, which of course you can't, they would find another word and simply reframe their justification, to the same effect. Removing a word will not force them into self-reflection.

At least they take seriously

At least they take seriously those murders where the perp leaves behind notes.

What is this referring to?

Example of the opposite?

Black on black shootings are

Black on black shootings are rampant in this city . Yet they’re reported like tickets announced at a deli counter

Press don’t care about violence in the hood .

There are way more white-on-white homicides throughout the US. It so puzzles me why you would bring up “Black on Black” shootings here on UHub…

Why do you make it about race, I wonder?

Black on black violence is an

Black on black violence is an epidemic and anyone who also lives in the midsts of it will willingly testify to the fact. Every summer gun violence ramps up. It’s just a Matter of fact .

This specific article is about black
On black violence . Viva la relevance

Where do you live?

Black on black violence is an epidemic

According to whom , besides Tucker Carlson?

Do your neighbors talk about “Black on Black” crime?

I appreciate your concern ,

I appreciate your concern , Mr Honky

Keep up that perspective , whitey Corngood

Are you asking me to ban you?

Been commuting up and down that road every day for three decades. Never had a problem.

Sounds great. What else

Sounds great. What else doesn't exist based on your life experience?

I write enough stories about shootings in Boston that you could surely find one on which to expound on how the press sucks without creating a huge derail on a story about two people who apparently died solely because of their race. Please stop.

you successfully disproved your own argument

This specific article is about black
On black violence . Viva la relevance

"This specific article" is about the murder of two Black people by a white man. What are you referring to?

I don't know who you really are, but I do know you're the guy who used a random attack in the south end by a 58 year old to take the opportunity to go after "Straight young black men" and tell them they need to "Stop beating your women and your lgbtq and have some respect"

we can see what you are.

Who uses the word “honky” besides out-of-touch white people assuming that it’s a word Black people actually use in the year 2021? To say nothing about the regurgitation of classic 80s right-wing talking points.

Are you also upset

when people choose to report on terrorist acts or serial killings rather than shootings?

How about the fact that we have different punishments for murder vs manslaughter?

Turns out, society has decided a long time ago that we care about the reason why crimes are committed. Why are you only complaining about reporting on this particular reason?

This has to stop

I did not see the updates on the victims until 10pm last night. Two good, brave and innocent people shot just because they went to offer help -- and by a man who held hate in his heart on the way to likely attack a local temple. One of our art assoc. members was quoted on WHDH saying: when are people going to stop this--and understand we are all the same. I could not agree with her more.

Did anyone read Farragher’s piece about the shooter?

From last summer. A glowing piece about the shooter, his fiancé, and her relationship with her grandfather.

Hmm, the people in the

Hmm, the people in the article are fans of Bernie Sanders. Are you sure about this?

The article states that only the girlfriend went to the Bernie Sanders rally; it says Nathan did not attend.

You're right. Finding an

You're right. Finding an excuse to skip Sanders rally is a red flag for white suprematism right there.

What exactly are you fishing for, NFB?

In other Winthrop news

It's official: Lydia Edwards is now Senator Elect Edwards
Baker names replacement for DA Rollins
Top aide to sheriff announces run for sheriff
Rollins confirmed as US Attorney; whom will Baker pick to replace her as DA?
The battle to replace Boncore
Rollins comes step closer to job as federal prosecutor