Citizen complaint of the day: Stupid 'urgent auction' signs sprouting like mushrooms in the mist again 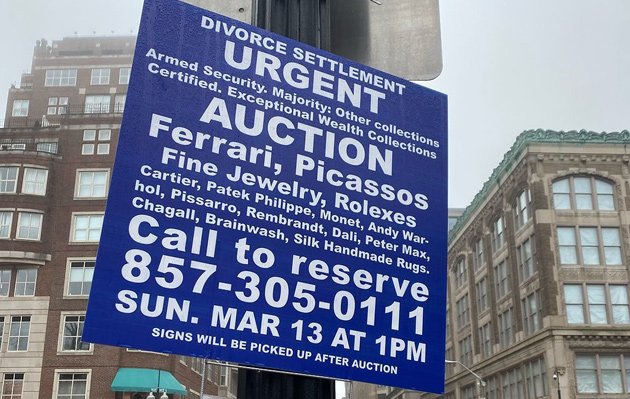 There are at least 30 signs that are posted without a permit and against historic guidelines on lamp posts on the following grid streets in the Back Bay: Arlington between boylston and Newbury. /Newbury streets between arlington and Clarendon (2 blocks) Berkeley streets from Boylston to beacon - they are advertising an estate sale and I'm sure they don't have a permit. Please have DPW remove them. Thanks! They are affixed with packing tape so all you need is scissors. Thanks! Eyesore. !

We are sure the signs are totally on the up and up and whoever put them up is definitely not using them as a scheme to capture people's credit-card numbers when they call all excited about the chance to pay cash for a Warhol, so far be it from us to note that number is a toll-free one, which means whoever's behind it has to pay for every call that you might make to it, even if you don't give up your credit-card account number.

Like 10 within a block of each other in Newtonville.

they are all over

Many in the VFW Parkway in West Roxbury.
Begs the question: Ferrari or Picasso? Which to I need more?

I always keep a Picasso in my Ferrari, for emergencies.

Cities need to send cops to

Cities need to send cops to these auctions and fine them

The police can't handle all

The police can't handle all the violent crime in Boston and now your priority is sign enforcement. Nice.

Spoken like a true Fox News viewer. Apparently the cops can't handle the violent crime around here (news to me) so apparently they shouldn't do anything else and just give up.

Almost ran over two guys putting these up out in Waltham Thursday night (RT 20 near the Weston line)- they were darting across the street to spam the entire intersection. Not sure if I like the dark blue over the previous yellow signage, but is slightly less obvious...

Cass right before Mass too

I could use a Picasso...

...I'll hang it next to my Georgia O'Keeffe.

(857) is just one of the overlays for (617). This is local. And, well, probably a lot of scamming involved.
Since the sign says "signs will be removed after auction", I don't imagine Boston DPW is going to worry about them before Monday.

It went to the voicemail for "Auction Department"

Lot of effort to put up signs if you're not even going to answer the phone. (I guess it is late … but it's bright and early in Russia.)

OMG they called back

A real person. Like actually for real called back. The Ferrari has been replaced with a Lambo and there are several Picassos.

I am *almost* interested enough to head out to Newton. If I hadn't done my long run yesterday I might just do it. (I guess I could run out Comm Ave and take the T home from Riverside, or something.

Adam if I go as an Official UHub Correspondent can U Hub cover my T fare home?

Keep an eye out for any Isabella Stewart Gardner paintings...

Monica's dress added to the inventory

along with a relic of the true cross.

What is the location in Newton?

As long as you're going

I don't want to brag, but I've been doing pretty well for myself lately and feel like my home should reflect my new socioeconomic status. If you're at the auction and there are any Thomas Kinkade paintings can you pick one up for me?

I think one hanging near the entrance of my house will immediately let every visitor know that they're not dealing with some local rube, but are in the home of the upper crust.

You clearly ARE new money.

Everyone knows you make such a statement using marble columns:

Based on any 311 I've ever posted, the city will mark this as "cleared, sign gone" in a month or two.

Scissors are a faster solution. Snip the plastic ties; dispose of sign.

The current signs all seem to

The current signs all seem to have metal prong type things on them so they can be staked the ground instead of only taping to poles. With the high winds these two days, the signs that are taped to pole but still have the metal spikes, are dangerous if it blew off and hit someone.

Taking down those "WE BUY TEST STRIP" sign whenever I see them.

I carry wire cutters in my bag just for this purpose.

Regardless of the legality of their 'business', putting a signs up every 100 feet or so, putting stickers on every light pole... its just a bit excessive.

I find any company or business who does this guerilla marketing is probably one I don't want to do business with. (I'm looking at you also WE BUY HOUSES.com). Hire a real marketing company if you're legit.

But no, its not and the minute someone breaths about testing the legality of this 'business', those signs would be gone instant and no trace of the company would be left.

Anyone else see these? I took one down on Rindge Avenue in Cambridge last week.

"signs will be removed after

"signs will be removed after auction"
---
Ah, yes, one of the great pre-emptive insincere apologies - right up there with "mods, please remove if not allowed" in community Facebook groups.

Is packing tape an approved

Is packing tape an approved historically-accurate material by Back Bay authorities?
We have standards, after all!
---
What would be historically appropriate? Paste? Gum? Pitch?

I believe one would normally

I believe one would normally pay a street urchin or tatterdemalion a ha'penny to wear the sign around their neck until after the Ferrari auction.

I like the "divorce settlement" angle instead of an estate auction. No one is going to suspect it's a similar scam...

I'm pretty sure the whole "Cash for your Warhol" thing isn't a scam, just some local dudes art project.

Yeah! It's absurdist goofiness taking aim at precisely these sorts of signs.

It's a scam, but nobody cares

In general it seems like law enforcement doesn't care about proactive enforcement on these sorts of scams. If someone realizes they paid a lot for their "Picassos" (Picasso's less talented cousin) they could file a police report afterwards and maybe something will happen.

Read it again/Just google it

Read it again/Just google it for yourself. I'm not saying that the signs in Adam's post aren't a scam. I am saying specifically that the "Cash for your Warhol" signs (or more likely stickers) is not a scam.

Yes, I know, "cash for your Warhol" is a joke

But those signs offered to buy your Warhol, while these signs offer to let you buy their Warhols, so I thought that was kind of funny. I might have a low bar for humor, but there you have it.

on every post for about 1/4 mile southbound. These people need to be heavily fined.

Some people really need to get a life.

this auction is for 1 bill russell signed card.
the card is evenly centered at the top and bottom. please see pictures for details. there is no surface / back wear.

this posting will be removed once the auction is over.

They go to ALL that trouble and then don't list the address? Creating another hoop you have to jump through to attend is crazy. I hope no one showed up.

Storrowing is easy; try getting your car up on a guard rail
Man sought for beating somebody during Copley Square Celtics watch party last Friday
Frisco columnist finds Boston far more world classy than his town, because we hide our homeless from visitors
Copley Square was all in for the Celtics tonight, but then the fights began
Back Bay to get restaurant serving food until 1:30 a.m.; quieter space to replace rowdy, now defunct club
Two Irish brothers come to town for St. Patrick's, get drunk, harass some women at a Back Bay bar, get beaten up by a guy calling himself JFK