As clock ticks down on the Orange Line, Boston adding temporary bus lanes to key Charlestown roads, shutting some roads to cars downtown and in JP and Back Bay 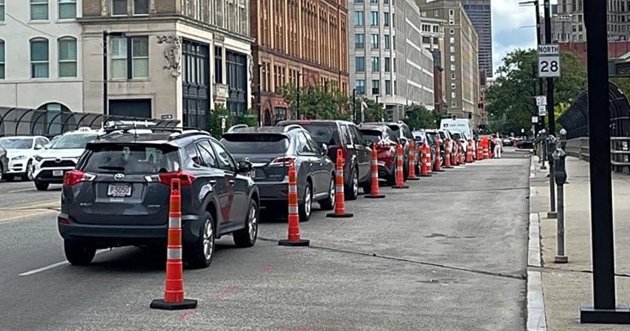 New, temporary but as yet unmarked bike lane on Columbus Avenue. Photo by Evan.

Boston officials today announced some changes to roads along the route of the soon-to-stop-running Orange Line to help ease the passage of the big replacement buses until the trains allegedly start running again in a month.

Starting tomorrow, the Gilmore Bridge, Rutherford Avenue and Sullivan Square in Charlestown will get bus-only lanes. State Street between Congress and Washington streets downtown will be shut to cars completely, as will Dartmouth Street between St. James and Boylston streets in the Back Bay and the northbound side of Washington Street between the Arborway and Williams Street in Jamaica Plain.

Parking will be banned at places where the Yankee Line buses will stop in place of the Orange Line; BTD is adjusting signal timing along their route to give them priority.

The shuttles won't be tempting fate on the congested streets between Back Bay and Haymarket. At the city's urging the MBTA yesterday agreed to add a stop on the SL4 Silver Line outbound route at Surface Artery and Kneeland Street. The T also agreed to add a rush-hour shuttle bus running connecting Tufts Medical Center, the Chinatown stop and Government Center - running once every 30 minutes.

BTD is working up street signs for posting in Chinatown to get residents there to the closest Green, Silver and Red Line stops.

BPS will be distributing up to 5,000 CharlieCards loaded with free seven-day passes for students who had been planning to take the Orange Line - but the city says students "should plan for delays and ensure they leave additional time to get to and from school." Officials say, however, that "sudents arriving late due to transportation issues will not be penalized" - and that schools will keep breakfasts available for students who arrive to school late.

BPS adds that parents of seventh- and eighth-grade students can apply for a waiver on the BPS Transportation Support Portal so that they can ride a yellow BPS bus instead of trying to navigate to school on an Orange-less T. Parents with questions can contact the BPS Transportation Helpline at 617-635-9520 or by e-mail at [email protected], 9 a.m. to 5 p.m. now or 6 a.m. to 7 p.m. once school is in session.

Boston Public Works has been going along the shuttle route and patching and fixing sidewalks at stops to make them accessible to people with disabilities.

Boston residents can get free 30-day Bluebikes passes during the shutdown, which provide an unlimited number of 45-minute trips at no cost. Available at the Bluebikes Web site or app starting Friday. The city is adding more bike racks downtown and is installing temporary bike lanes along Columbus Avenue in the South End and along Boylston Street in the Back Bay.

During the shutdown, CharlieCard or CharlieTicket holders can get on any commuter-rail train from a Zone 1, 1A or 2 stop for free - you don't even need any value on your card or ticket. CharlieCards are available at City Hall and BPL branches.

My understanding was that the city will be providing shuttle service to Chinatown along with addition service from the silver line.

That one short stretch of State Street next to the Old State House is really important. It's pretty much the only vehicle connection from the Faneuil Hall area to Boston Common or to Cambridge Street going towards the Longfellow Bridge.

Alternate route #1: Go north on Congress Street. When you get to New Sudbury Street, there will probably be a detour due to demolition of the Government Center Garage. Do whatever that detour says. Eventually you will hopefully get back to New Chardon Street and you can take that up to Cambridge Street by Government Center. If New Chardon isn't open, then north on North Washington St., left on Rip Valenti Way, right on Haverhill St., left on Causeway St., to Staniford St., to Cambridge St.

Alternate route #2: Going south on Congress, when you get to the junction of State St. by the Old State House, bear slightly to the right onto Devonshire Street. From Devonshire, turn right on Milk, right on Washington, left onto Court St.

Alternate route #3: If you miss the tricky turn onto Devonshire St., then go south on Congress, right on Franklin, right on Arch, left on Milk, right on Washington, left on Court.

I work in the tour bus industry and we are always trying to get from Faneuil Hall to either Tremont St. or Cambridge St. Not only will this be a long detour and difficult to follow -- will signs be posted? -- but these alternate routes all involve narrow streets where it will be difficult for a bus to turn.

And this is why

I tell my out-of town friends "don't even think of bringing a car into downtown Boston. Take the T instead."

This shutdown will be a nightmare.

It goes from downtown crossing to Charlestown. It goes right by State Street.

Between Congress and Cambridge. So just take a left at the current end of Congress.

I figured during this great "resurrection"

I said this previously

But it's worth repeating: It's amazing what the city can do when there's some political urgency.

Streets get closed to general traffic so busses can move quickly. Sidewalks get fixed with the disabled in mind. Signage gets posted. Bus stops get added where needed. The commuter rail becomes free for short distance travel. Cycling is strongly encouraged as a viable alternative. Etc.

It's a shame it takes something like a forth of the subway system to get closed to make officials focus on transportation via every method but private car.

It's too bad it won't last. Still, it's proof it's possible for the city and state to move quickly.

Easier sell when it's

Easier sell when it's temporary but you make a great point regardless.

And that is why

Back in 2015 on this website I took the role of cheerleader for the Olympic bid. Sure, there was a very strong chance we could not afford what was needed to get done, but a lot of the infrastructure repairs that were overdue back then would have gotten done.

Now, after all of this, there will still be a ton of work needed to get done on the T (for example, how long has that one side of the exit from the Orange Line to Ruggles Street been closed off?) but perhaps if feet are continuously put to the fire, it will get done.

Who knows how the Olympics would have turned out. But I'd trust Mayor Wu a lot more then Mayor Walsh to make sure Boston didn't get screwed by the games. Walsh's willingness to do anything to win the bid is what spooked people.

The response to the Orange Line fire drill has been telling. I can't envision Walsh or any of Wu's election opponents being as proactive in prepping for the shutdown.

So is there going to be north/south traffic in two south bound lanes heading north from Forest Hills? Or is northbound traffic going to just be shunted over to other roads?

I'm surprised the T hadn't considered putting Orange Line shuttles on Columbus Avenue, which runs parallel to the Orange Line between Egleston and Ruggles, and makes the same stops - it also has a dedicated bus lane. Shuttles can still run to serve Green Street and Stony Brook to Jackson Square, but having a second shuttle with limited stops (say, Forest Hills to Ruggles to Back Bay) would be worth it for some passengers.

Councilors want to make sure nobody else gets bonked by a falling light pole
City Council could be buzzing on Wednesday
Mayor Wu says no new fake grass in parks
Summary of today's hearing on City Council redistricting
Residential development on a precipice?
Covid-19 not done with us yet