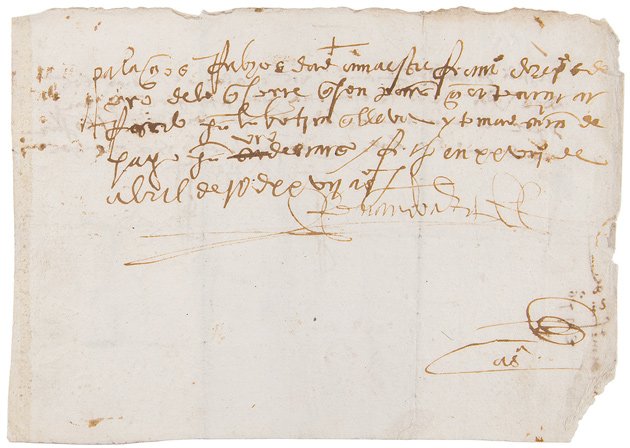 Part of the letter. Note how the bottom right appears to have been torn off.

The federal government is moving to seize a document purportedly signed by Hernán Cortés in 1527 that may have been stolen from a Mexican government archive before it wound up for sale by a North End-based auction house last month - a sale the firm agreed to halt after being contacted by the FBI.

RR Auction on Commercial Street withdrew the lot that included a note signed by Cortés related to a sugar sale from a June 15 auction after the FBI began investigating a claim from the Archivo General de la Nación de México on June 6 that the document was actually stolen, according to an affidavit by Geoffrey Kelly, an FBI agent in Lakeville whose job includes investigating the theft of art and cultural antiquities.

The document is currently being stored at an RR facility in Amherst, NH.

In filings last month that were unsealed this week, the US Attorney's office in Boston asks a judge to let the FBI take the document so it can be studied to make sure it really was cut out from a bound collection of documents at the archive:

The foliation of the pages is located in most of the documents in the upper right part, marked in red, so a physical inspection of the offered document
is required to identify if the folio number was erased or the page was mutilated.

The document published by the auction house shows that one of its edges was restored. It is an evidence of the cut that was made to the file which could have been eliminated.

The affidavit quotes from the auction house's description of the document:

Spanish conquistador (1485-1547) who initiated the conquest of the Aztec Empire on behalf of King of Castile and Holy Roman Emperor Charles V, and, in so doing, assumed an instrumental role in the first phase of the Spanish colonization of the Americas. Excessively rare manuscript DS in Spanish, signed "Hernando Cortes," one page, 8.5 x 6, April 27, 1527. Document issued to his majordomo, Nicolas de Palacios Rubios, instructing him to give to Maestre Francisco twelve gold pesos for certain pink sugar that he is carrying for the pharmacy and to take note for his accounts. In full (translated): "Palacyos Rubyos: give Master Francisco twelve gold pesos, of the gold that is circulating, which are for a certain rose sugar for the apothecary that he keeps, and get a receipt for your discharge. Done on the 27th of April of the year 1527."

The reverse bears a handwritten receipt acknowledging fulfillment of the request, in full (translated): "I, Master Francisco, received from you, Palasio Rubios, the twelve gold pesos referred to on the other side, and they are for the rose sugar. And I signed it with my name as the truth, today, the 13th of May of the year 1527." Docketed along the edge and verified by Cortes's 'witness of assistance.' In fine condition. The consignor notes that this document was displayed in a museum in the Midwest for over 20 years.

According to Kelly's affidavit:

The foliation of the pages is located in most of the documents in the upper right part, marked in red, so a physical inspection of the offered document is required to identify if the folio number was erased or the page was mutilated.

The document published by the auction house shows that one of its edges was restored. It is an evidence of the cut that was made to the file which could have been eliminated.

If the government can prove to a judge's satisfaction that the document was purloined, it would move to return it to Mexico, similar to the way it won an order last year to return a letter by Alexander Hamilton to the Massachusetts state archives decades after it had been stolen. That letter also came to FBI attention after it was put up for auction.

Dave Rawlings version is great, too!

I saw Neil do it in 1976 at what was then known as the Music Hall. Fast forward to recent years. I saw him there again. He and I are both much older now. He said "it's good to be here at the Music Hall. Don't they call it the Kellogg's Corn Flake Center or something now?" :-)

Just so you know, Cortes totally exceeded his authority and proceeded with the Conquista without the required authorization from the Crown. It was considered illegal by his superiors and almost cost him his ass! Just an interesting historical note

And most likely a Marrano ;)

And most likely a Marrano ;)

But some of his crew.

Last month, RR Auction had to stop another auction when NASA pointed out that the moon dust and cockroaches it was offering actually belong to the space agency.

Maybe they need to do a little more checking on the provenance of the stuff they're selling.

does that only apply

to stuff from Rhode Island?

FBI is ok, but we need to put Wishbone on the case.

Man who bought old Tunnel Administration building in the North End wants to turn it into that rarest of North End things: A single-family house
Probably not part of a feast procession
St. Agrippina made her way down Hanover Street tonight
Big-ass skyscraper could be in the works for area near North Washington Street Bridge
Congolese brunch place opens in the North End
Living Room to become daycare in the North End