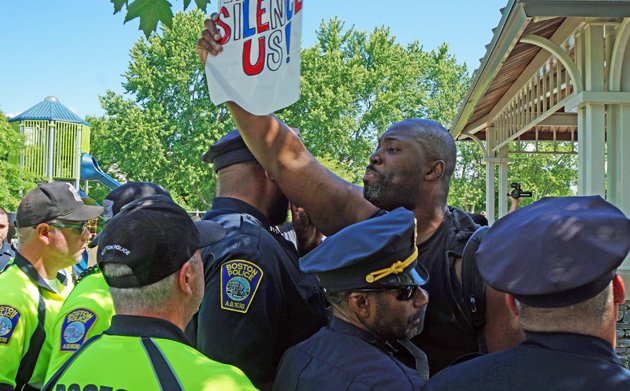 Row of cops keeps Nelson from getting in Louijeune's face at Hyde Park playground.

With most people there to get some free potted plants or Munchkins and to chat with Mayor Wu, the usual gang of Covid screamers also descended on Iacono Playground in Readville this morning - this time with a large contingent of uniformed cops between them and the mayor.

They were joined at the mayor's coffee hour by a second group, the United Front Against Displacement, there to protest what they said was Wu's involvement in displacement of poor people from public housing and neighborhoods across the city. They pointed to the proposed Crane Ledge project in Hyde Park and the redevelopment of Mildred Hailey in Jamaica Plain as examples of how Wu talks a good game but is presiding over the further gentrification of Boston.

At one point, anti-vaxxer queen Catherine Vitale of Dorchester went over to talk to them about possibly joining forces. When she saw some of the anti-displacement protesters speaking to a Universal Hub reporter, she moved over and urged them not to talk to the reporter because, she claimed, he is "a scumbag" and, even worse, a Wu supporter.

The half dozen or so anti-displacement protesters held signs up and chanted behind Wu as the mayor and other elected officials spoke. But they did not scream or try get in the immediate faces of any of the politicians. In contrast, there was one of Vitale's fellow bellowers, Shawn Nelson.

Nelson, who had been arrested in Ronan Park in Dorchester on Wednesday after refusing to give up his bullhorn and then running at the mayor, this time turned his attention on at-large Councilor Ruthzee Louijeune of Hyde Park, possibly because Louijeune stayed at the event after Wu left.

Holding a sign reading "You Will Never Silence Us!" he kept yelling at her about Covid and him being silenced and he kept trying to get closer and closer to Louijeune But a large knot of BPD officers, always careful to keep at least an inch between them and him, and at least one of them as big as him, held him back, so he never got closer than about four feet to her. Finally, they managed to direct him off to the side of the park and away from her.

not really worth discussing

not really worth discussing the bucket bangers at this point

genuine question though, who is a development at crane ledge displacing? seems like we would go from no homes to any amount of homes there.

And yea it sucks to get kicked out of your home, but Mildred Hailey seems to be offering residents apartments elsewhere in the complex? And the new development again has a net increase in income-restricted homes and a much better integration with the neighborhood.

In that case, not displacement but gentrification

The theory is that by building luxury apartments there, it will drive up the values of the surrounding neighborhoods, helping to drive out residents.

I've been following Crane Ledge. Neither displacement nor gentrification have been issues raised. On the surface, the issue has been social justice, in that this majority minority neighborhood will be losing a natural resource, and they feel such resources have been lacking in the area. Below the surface, the homeowners feel that the woods helps make their property worth what it's worth, so it is a tiny bit of NIMBYism. I'm torn on the issue, as I see the value of both new housing and nature.

Building fewer, higher buildings would allow more open space. The developer wants to build weird suburban sprawl instead of looking at the site and figuring out how to make the best use of it.

No this is a lie

White progressive are sling by what the normally do. Getting 1 or 2 minorities in onboard and then trying to speak for the whole black population to legitimize they’re BS.

That’s how they protect their property values and keep more black people from moving in. Any black person who is moderately woke knows the drill.

It’s pretty damn common… especially in liberal utopias like Boston where they believe know what’s best for black and brown folks. It truly truly disgusts me- the paternal attitude.

No one thinks of the young POC growing up in this city scraping by, failed by the schools, ignored but the city as a whole, and looking for their first apartment. No one. Not a soul.

Trees are important, but property and trees do not have more rights than people.

You’ve never been in the area around Crane Ledge.

I didn't vote for Mayor Wu

But I feel sorry that every event she attends turns into a festival for fools.

What a shame!! I do believe and want free speech! I understand them protesting but com on pick and choose where you do it. When a family and there children have to listen to this non sense and can't enjoy a day at the park it's gone too far!!!!! For Real there behavior would immediately be on the other side. I can't unite with people who have no respect for children and just steal a nice day at the park with their friends and siblings. God bless enjoy the day!!

She's a sweetheart, a classic politician looking out for the residents of the City of Boston. I cannot think of anything controversial she's done since being sworn in. Why mess with her?

Okay, the screamers would mess with anyone since they've gone fare over the line between rational and irrational, but still.

How much do all these cops on OT cost the city?

There are a handful of loony protesters, it’s overkill to have this many officers.

The guy in the photo showed up after trying to charge the mayor a couple days earlier.

If these fools got jobs, BPD

If these fools got jobs, BPD wouldn’t have to assign so many officers to supervise them. But, it seems their full-time job is to harass City officials. Pathetic!

...until it isn't.
And you can't predict how many are going to show up, who will show up, how nutty they'll be, etc.

Do these people not have jobs?

Good thing she has armed protection

Most have to take their chances with the kooks, unless you can afford armed security or you can convince your local Police Captain you are worthy of being armed in public.

Or any of the other elected officials who were there.

Most of the people who were crowded into Iacono Field were local senior citizens, with a few parents and kids, you know, the kind of people who can actually show up at a park at 10 a.m. on a weekday to pick up a potted plant (free potted plants at mayor's coffee hours goes back to at least Tom Menino) or, and I know this is shocking, actually just meet the mayor.

If there were no cops there, and the at least outwardly angriest of the angry people picked up a head of steam and ran full throttle at the mayor, he'd knock over lots of people in his frenzied dash to, um, do whatever he feels he has to do to the mayor, whom he must outweigh by a couple hundred pounds. And then you'd wind up having all the cops from the district and the EDP teams from elsewhere in the city descending on the park anyway, breaking up the fight and helping EMS get all the injured people into ambulances (I mean, if you read the Dorchester Reporter account of what happened in Ronan Park, it took several cops to get the guy down to the ground).

Better to have a large show of force up front to keep that from happening, both by creating a physical wall between would be Charger Guy and by getting people to walk away from the Screamers, who would love nothing more than to have somebody take a swing at them and who have already shown a predilection for acting out on their anger.

The cops, both the ones in uniform and some in street clothes, were really good at that yesterday (and in Roslindale for weeks, for that matter).

In one sense, it was kind of shocking to see so many cops at a neighborhood event - I've been going to these sorts of things for years and have never seen so many of them - but they were good at sort of mingling with the crowd and letting the obviously less crazed people shake hands and pose for photos with Wu, Arroyo, Louijeune, etc. while instantly galvanizing into action at the first sign of trouble.

And now, the rest of the story

Lots of photos of smiling people at the mayor's coffee hour in Readville.

State shuts Turtle Pond due to bacterial bloom that could kill dogs
Hyde Park man gets 32 months in federal prison for swindling senior ladies looking for love
The four-way race to replace Sonia Chang-Diaz in the state senate
Parakeets are not native to Readville, so this is probably somebody's pet
Will it blend? No, it won't, Hyde Park woman charges in blender suit
You just never know who's going to turn on you: Two guys who attended a wedding together get into an argument at a Hyde Park bar, then one waits outside for the other to slice him up with a knife