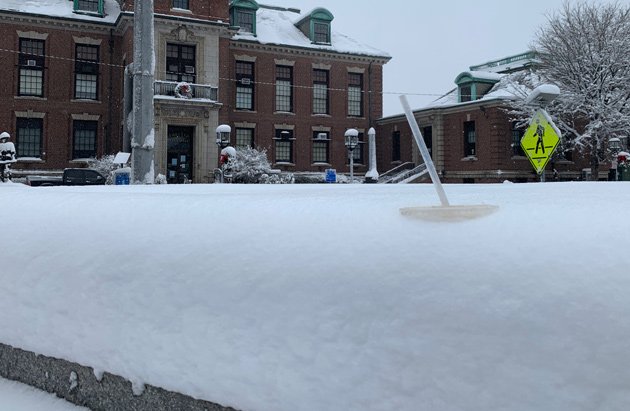 Our own Cybah reports the area in front of Chelsea City Hall got one large Dunkin' iced-coffee cup's worth of snow this morning. In Franklin, WHDH's Kimberly Bookman used a variety of scales, including an ice scraper, an umbrella, a plunger, a bottle of some sort of pinkish wine and, of course, a potato masher: In Copley Square, WHDH's Juliana Mazza interviewed a New England winter-shorts bro, which, OK, has nothing to do with measurements, but is just a classic New England thing, no? I was on my way to the Silver Line (to get my hairs did) and saw the fresh snow there in front of City Hall. All I had was my coffee and voila, a new unit of snow measure for New Englanders is born.

What's funny is the cup is re-used and filled with iced coffee i made at home and not DD. And yeah I like creamy coffee.

All I had was my coffee and voila, a new unit of snow measure for New Englanders is born.

In other Chelsea news

State dumps asbestos-laden rubble near Chelsea apartments
Floramo's Therapeutics: Where the meat falls off the bone thanks to our new bio-engineered bacterium
Man jumps off Meridian Street Bridge, is rescued
People moved out of Suffolk County after the pandemic hit
Blowing the world's largest soap bubble in Chelsea
Race for DA could be referendum on Rachael Rollins