Signal-box painter in Jamaica Plain highlights threatened species, including one found only in a small pond near the Muddy River 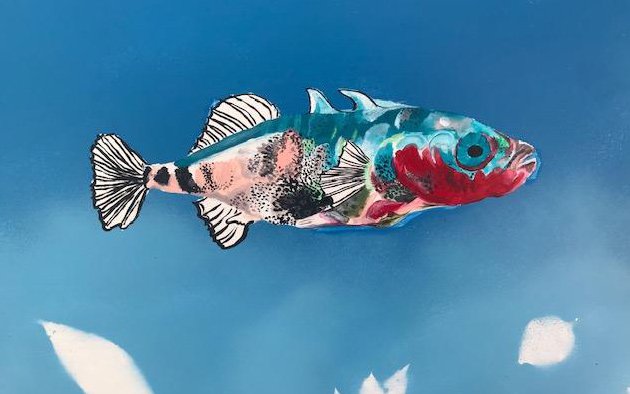 Jovielle Gers's mural on a traffic-signal box at 3201 Washington St. in Jamaica Plain has depictions of four rare species in Massachusetts: A piping plover, a red-bellied cooter turtle, gerardia flowering plants and a tiny fish, known as the threespine stickleback, which has its only Massachusetts freshwater population in a small pond that feeds into the Muddy River in Jamaica Plain.

Threespine sticklebacks as a whole are not threatened - they're found across colder waters in the northern hemisphere - but most live in salt water, then migrate to fresh-water streams to spawn. In contrast, the Jamaica Plain sticklebacks just stay where they are in their Emerald Necklace hideaway - a pond so small it has no name, off Willow Pond Road and the Jamaicaway, behind where the skating rink used to be. This tiny pond is the only place in Massachusetts where you can find exclusively freshwater threespine sticklebacks and the southernmost place on the East Coast to find that version of the fish, which grow to maybe 1 1/2 inches.

Also, unlike other threespine sticklebacks, which have one of three types of rear-body armor - either completely going back to their tail, halfway, or barely any at all - the JP ones come in all three forms. Some even have four or five spines instead of the usual three. Like other male sticklebacks, after fertilizing eggs from females in an underwater "nest," the males guard their brood, fanning them to ensure they get enough oxygen, until they hatch and mature.

A 1984 report included a description of a 1979 sampling project up and down the Muddy River basin, such as it is, to find other examples of the fish, but none were found outside that one unnamed pond. The report also describes how, in 1981, researchers used a net to catch 230 of the fish from the pond, then dumped them, live, into a formaldehyde solution, to study them.

Nobody knows how the fish wound up there. Although the Muddy River flows into the Charles, which was once a tidal estuary, it's essentially been cut off from ocean waters since Olmstead directed construction of Charlesgate to try to reduce the stench of exposed sewage in the Fenway section of his Emerald Necklace in the 1880s. The Charles itself was turned into what is essentially a freshwater lake by the construction of dams after the turn of the century for much the same reason, although the current dam does have a fish ladder for the hardier anadromous fish.

The box that Gers painted on Washington Street is a little less than a 1.5-mile walk from the pond.

Gers said she hopes the mural will “raise awareness and inspire awe at the beauty of these incredible creatures and bring them in a safe way right into the middle of the city. I believe the more we can experience awe on this incredible planet and awe at our chance to be alive, the more respect we will have for the mystery and beauty of life.”

I think a written description

I think a written description of the species and the fact that it's threatened should also be on the painting. The public walking by will just think it's a painting of a fish. People need to be woke.

I agree, and I made the painting! I would love to include information on each species, and had planned to. Unfortunately the PaintBox program that commissioned this piece does not allow for any text. I’m figuring out how to get this information out there and am happy to hear any ideas! Thx.

Would they let you add a QR code or website so folks could access the info? Just a thought...

Then the wizards who gave you

Then the wizards who gave you the commission rules need to get woke. That's crazy. These threatened species need to be identified and the fact that they are at risk needs to be amplified. Otherwise, it's just a fish. A beautiful painting of a fish. But not just any fish. If they have common sense and care about our ecosystem, they should allow you. How many agree?

Hi Jovielle ! Back in the day; I lived above you on Hewlett in Rozzi. So pleased to see you being recognized for your work. Beautifully done. Hope you all are doing well. -cathi

...a pond so small it has no name, off Willow Pond Road and the Jamaicaway...

Is it Willow Pond? The only pond that the USGS shows in that area is Willow Pond.

Only thing is, the 1984 report I linked to was very specific in referring to "a small unnamed pond" that drains into Willow Pond. They said it was roughly oval and roughly 32 feet by 85 feet.

In fact, if you follow one of the paths through the woods from Willow Pond Road towards Wards Pond on the Boston side of the Muddy River, there is a small pond, or pool, there. It's large enough to support some frogs (well, one, at any rate). I don't recall it being 85 feet long, but the last time I spent any time there (last spring, looking at that frog), I wasn't paying any attention to dimensions. Or maybe it's shrunk over the past four decades.

There is a pond there...it's

There is a pond there...it's spring fed somehow, and with a pretty substantial flow (at least 5-10 gallons a minute even in the mid summer). 85 ft is a little generous for length, but it's around the size Adam mentioned. I've always wondered if it was always a tiny pond, or if Olmsted tapped into a stream or spring to build it when creating the current version of the Muddy River. I haven't been able to find any information about it, though. There's currently some fencing to promote native plant growth, or at least was some last time I ran by.

I grew up (almost) near there

and was always led to believe that Jamaica Pond flowed under the roadway to Ward's Pond.

Walk down to Wards Pond and you can see the waterfall from the pipe that goes under the road, near the intersection up above. And in Jamaica Pond itself, you can see the outflow drain 10-20 feet from the shore, at least in the summer, when the water level is lower (when it's really low, sometimes turtles will climb on top of the metal frame to sun themselves).

From there, the Muddy River starts as a creek out of Wards Pond.