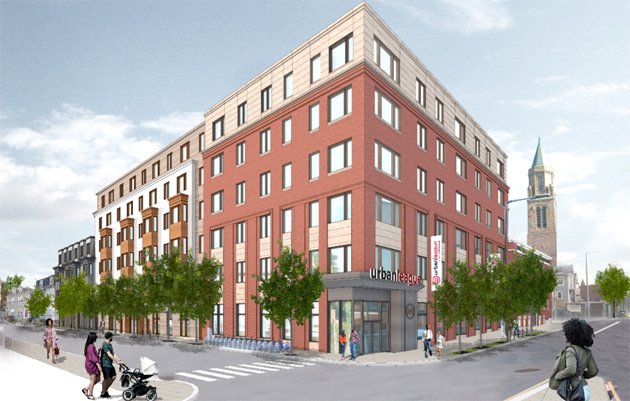 The Zoning Board of Appeal today approved plans by the Urban League to replace its current headquarters on Warren Street in Roxbury with a new six-story building that would have a new office for the league topped with a mix of apartments and condos - 65 in all and all designated as affordable.

The project, a joint venture of the Urban League and the Madison Park Development Corp., would have 24 parking spaces, 8 for the Urban League, the rest for residents and would replace what was originally a telephone-company building that the Urban League has occupied for 27 years.

The new building would have 43 rental units and 22 condos, in a range of 1-, 2- and 3-bedroom units, project attorney Joseph Hanley and Urban League board Chairman Joseph Feaster said. All would be rented or sold to people making between 80% and 110% of the Boston area median income, which means they would be available to participants in a variety of city and state first-time home-buyer programs.

Roxbury Main Streets, Gordon Conwell Theological Seminary, City Councilor Michael Flaherty and several residents spoke in favor of the project, saying it would continue the Urban League's long history of supporting the neighborhood and bring extra life to the revitalization of Nubian Square.

But an aide to City Councilor Tania Fernandes Anderson said that while she appreciates the affordable home ownership, it doesn't go far enough in providing new greenspace and other community amenities. Some residents said the building would have children in families, who should be able to have a place to play without having to cross a busy street.

Although the BPDA board approved the project in August, the zoning board conditioned its approval on BPDA designers working with the Urban League and Madison Park to answer the criticisms from Fernandes Anderson and residents.

"It's a really important site in the community and it deserves the best it can get," board Chairman Mark Erlich said.

Police: Kid from Lawrence came down to Roxbury to sell some drugs
Mattapan man charged with shooting off his gun on Wayne Street in Roxbury
Visualizing some of the Boston area's Black neighborhoods - in textiles
Man arrested in New York City for April murder on Wyoming Street in Roxbury
So a guy drives to Madison Park High School with two guns in a locked bag in his car and the guns get stolen
Chompy table-flipper sought for attack in Grove Hall restaurant