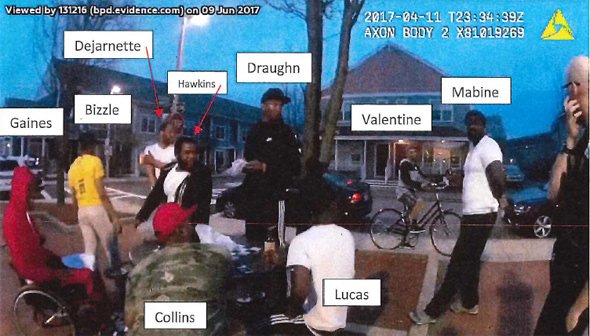 Alleged gang members hanging out in Orchard Park during chat with BPD.

A dozen men and one teen who police say had turned Orchard Park development near Dudley Square into a violent open-air drug bazaar were charged with federal drug offenses yesterday following a two-year investigation, Boston Police and the US Attorney's office report.

It was the second large-scale set of gang-related arrests in two days - the day before, BPD and the feds arrested 17 members of warring Dorchester gangs.

Officials hope the charges against 12 men and one teenager in the Orchard Park case - plus an earlier arrest and conviction of a man on crack and gun charges - lead to a safer Orchard Park by removing the most dangerous and active gang members. Officials hope that as members plead or are found guilty, they can not only send them away but include conditions for post-prison releases that will bar them from the Orchard Park area for several years. Two of the men remain fugitives.

But an affidavit filed with the case states several dozen other gang associates remain on the streets. In the past, large-scale crackdowns have led to remaining members or other gangs trying to fill the vacuum. In this case ATF agents joined BPD detectives in the investigation in part to help figure out if the Orchard Park Trailblazers were trying to expand after another crackdown led to the arrests of more than 50 alleged members of the rival Columbia Point Dawgs in 2015.

The 13 alleged members of the Orchard Park Trailblazers and the Vine/Forest Gang, and one man with no prior known gang connections, swept up in the investigation collectively had criminal records that included hundreds of arrests, according to an affidavit by a BPD detective who worked on the two-year investigation. Several were already awaiting trial on other drug charges. One has already served time in a federal prison for drug dealing. Another was only recently released after serving a 10-year sentence for manslaughter; another has a record that includes several convictions for assault and battery.

In the middle of the investigation, police arrested one alleged Orchard Park member, Diamond Brito, after informants working with police bought 12 guns and 35 grams of crack from him. He pleaded guilty last fall and is currently serving an eight-year federal sentence.

The members were surrounded by violence, Det. Gregory Brown wrote. Ten of the arrested men had themselves been shot or stabbed - one three times. One allegedly sold crack out of the wheelchair to which he'd been confined since being shot in 2001. One won't be tried with the others - he's been deported to his native Dominican Republic. A fourteenth person targeted by the investigation won't come to trial because he fatally overdosed before he could be arrested.

According to Brown, the gangs had such easy run of the Orchard Park and the older Orchard Gardens area that informants who had never been there before were able to buy drugs just by going up to guys and asking if they were dealing. And because of them, the development remained a high-crime area in a city where rates of crime have dropped over the past decade.

Between January of 2015, the development has seen 11 shootings - one fatal - 18 firearms arrests, 80 drug arrests and 51 robberies. But these numbers may underestimate the problem in the development, Brown wrote.

Brown wrote that part of the problem is the development's layout - a dense area of buildings clustered around numerous short dead ends, making surveillance difficult. And part of the problem, he wrote, was that once the gangs had established themselves on its streets, many residents grew fearful of contacting police because they knew they couldn't avoid the gang members.

I hope that just convictions will be obtained, and these communities will see a relief in gang violence.

Pet peave of mine

Did you notice that I didn't call them "gangsters"? Just trying to head people off at the pass?

I wasn't referring to you Adam

I meant the media in general.

Curious. What makes Al Capone a gangster and not these fellas? You should probably look up the definition of gangster..

Donnie Two Scoops is a gangster….oh wait….got that wrong, he is just a failed commercial real estate developer who is on the verge of impeachment. Never mind.

Interesting use of body cameras

I don't think people would have thought that the body cameras would be used for police intelligence, but the quality of the images were good.

I noticed two of the gangsters above live in Brockton but are affiliated with a gang in Orchard Park; do they commut to work each day?

His commute was the opening sequence of the show that bore his name.

You go where the business is, or where you have done business. Setting up shop in a new town could be fraught with problems.

Police: Man pulled out of car on Melnea Cass Boulevard with a loaded gun - and an infant
Person shot in the back on Dale Street in Roxbury
Woman charged with punching elderly man in a wheelchair in the head and robbing him in Nubian Square
Mothers walk for peace again
Citizen complaint of the day: Police can't collar loose goose
Roxbury man charged with lunchtime shooting outside Randolph Wendy's