South Station turns into most densely packed spot in the country 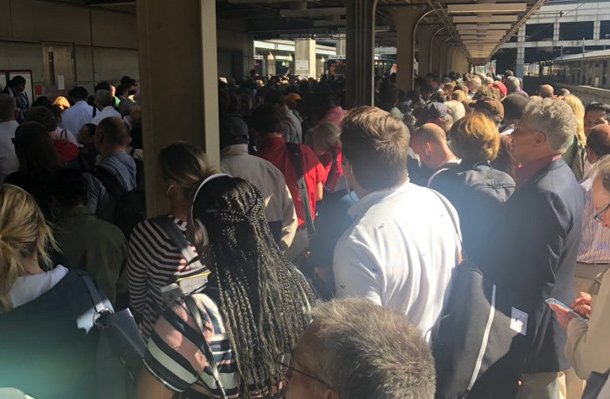 Dave Vittorini shows us just how close commuters can jam themselves together, in this photo taken around 4:45 p.m. at South Station, where some Red Line commuters tried using commuter rail instead.

South Station is a disaster right now. This pic doesn’t even do it justice.

Things are not much better on the parts of the Red Line that are still running. Pat Miguel Tomaino checks in from Downtown Crossing: reminding us that the red line and green line derailments were unrelated. ya Steve, we all know it's not just the red line that's a dumpster fire all the time.

But I’d love to see you connect the two.

Both are known problem areas

And in both cases, decades of underfunding have let maintenance slide. Beacon Junction and Columbia Junction are both areas where the T has been talking about replacing things for decades, yet is hamstrung both by funding and internal issues. So there is a connection. Neither of these occurred in a random location with a train jumping off the tracks (and that's actually good news). We know where the issues lie. Now we need to fix them.

Yet again I will ask

What does underfunding on the maintenance side have to do with operator error? I mean, the first run of the Cascades on the Point Defiance Bypass ended with a deadly crash, but that bore no relation to why the Empire Builder is late by several hours each day.

Maybe "maintenance" isn't the exact right word, but upgrading the track infrastructure and train fleet to include things like positive train control can eliminate a lot of operator error.

Plus, I can think of at least some hypothetical situations (and at least one actual instance) where pure lack of maintenance could exacerbate operator error:

Maybe an operator goes too fast while going through a switch, and because the switch is in poor condition it can't handle a train going 5 MPH over the limit, while a well maintained switch wouldn't have a problem.

The last I read, the incident on Sunday happened because he went through the switch while it was still moving, which presumably would involve going through a signal before it went green. How could poor maintenance contribute to this incident? Maybe the switch is a little sticky that day so it takes longer than usual to fully switch over. The driver waits for the usual time it takes for the switch to switch, and then starts moving again even though the signal is still red, thus the train passes over the moving switch and derails.

Maybe problems with a safety system force the operator to get out of the cab. Unfortunately they had bypassed the dead-man switch and also forgot to set the brake, so the traindrives down the track by itself for about 15 minutes.

Two invented scenarios and one actual event where lack of maintenance transformed operator error from "merely" a fire-able offense to a major incident.

The guy ran a red light

No level of maintenance, other than spending billions on a system that wouldn't work with street traffic (ie on the Green Line) would prevent that.

Corrupt management and completely useless unions. There! That was easy!

Lets do a study

The T is going to commission a million dollar study on why trains derail.Last year they spent a million dollars of taxpayers money to study why people cross the tracks and concluded to get to the other side.

Kudos to the MBTA lady at

Kudos to the MBTA lady at Lechmere trying to fit as many riders onto each bus as she could while turning over the buses as quickly as possible and apologizing to riders for the overcrowded buses. Talk about a vital but thankless endeavor!

Running a commuter rail train back and forth from South Station to Back Bay at regular, frequent intervals would help to alleviate congestion both at the South Station Red Line platform AND at the Downtown Crossing Red/Orange Line interchange.

You better believe the majority of commuter rail passengers heading into South Station with final destination around Back Bay station would prefer this option over the miserable Red and Orange lines. :)

People take the commuter rail between South Station and Back Bay

all the time. (It is Zone 1A to Back Bay, no charge to South Station).

Could there be more frequent trains? Of course! If we ever see the conversion to Regional Rail there could be trains between the two stations every 10-15 minutes, or more frequently.

My 4 pm train from Back Bay to South Station picks up around 30-50 people daily at Back Bay.

I take a train from South Station to Back Bay between 6:30 and 6:50 am each day. Of course this morning the Walpole train did not go to Back Bay and instead was routed down the Fairmount Line. About a dozen of us were on the train destined for Back Bay but were dumped off the train at Readville to catch an inbound Franklin train.

Seems like the train conductor did not find out about the detour until this morning. Unfortunately, nobody told train riders about this detour, due to an Amtrak switch replacement in Readville. It apparently will be in place for the next two weeks. Sadly, the T did not publicize it at all besides an alert on the Franklin Line schedule. There was no announcement about it at South Station, and there was no announcement on the train either!