Police: Man punches South End store clerk in the face in failed shoplifting attempt, then returns with a switchblade 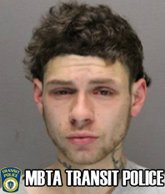 Boston Police report arresting a Dedham man they say really, really wanted to steal stuff from the 7-Eleven on Washington Street at Massachusetts Avenue in the South End yesterday.

Police say that Daniel Moreno, 23, first entered the store around 5 p.m., lifted several items, then tried to leave - only to be confronted by store clerks who weren't having it:

In the ensuing altercation, the suspect punched one of the victims in the face. However, the victims were able to retrieve the store property from the suspect before he fled the area.

But then Moreno returned, this time "significantly more agitated, and brandishing a switchblade," police say.

The victims stated the suspect lunged toward them with the knife in hand, grabbing various items from the rack before again fleeing the store, successfully stealing multiple items in the process.

Police say Moreno did not have much time to enjoy whatever it was he took: Armed with a detailed description, officers on patrol soon found him a couple blocks away at Mass. and Cass, where they arrested him on charges of armed robbery, assault by means of a dangerous weapon, assault and battery and larceny under $1,200. Police add that Moreno was already wanted on warrants for assault and battery by means of a dangerous weapon and possession of Class A drugs - as well as four warrants for shoplifting.

In 2018, Moreno was arrested on charges he threw a rock at an MBTA bus driver in Mattapan for kicking him off for not paying his fare.

>the suspect was discovered

>the suspect was discovered to have multiple active warrants for various charges including Possession of Class A Drugs, Assault and Battery by means of a Dangerous Weapon, and four warrants for Shoplifting

Hopefully they'll keep him locked up this time...

The Problem. We shouldn't have to hope a violent criminal is held accountable, it should be expected. Unfortunately, nowadays its expected he'll receive a slap on the wrist.

Well is it true that everyone

Well is it true that everyone gets a slap on the wrist or that we have the highest prison rate in the world by a huge margin? It can't be both.

The streets are full of seriously mentally ill people, most homeless, more often than not with serious addictions.

Some people simply require institutionalization. Re-open and expand in-house psychiatric hospitals.It was an epic mistake to have closed them back in the 70s and 80s.

Reagan was the first to seriously shred that social safety net,

but none of his successors has done enough to undo his pernicious work there.

Given the alleged crimes and where he was picked up, it's not hard to speculate this sorry clod has opioid abuse and/or mental health issues. Meanwhile, the Sacklers float luxuriously on an ocean of evil blood money.

Obamacare was a step in the right direction, but the country needs to do much more if we're ever going to get a handle on this problem.

A successful ACLU lawauit heard by the USSC in the late 1970s was the reason why mental hospitals, as they used to be called, were closed and massive deinstitutionalization occurred on a massive scale.

President John F. Kennedy's administration sponsored the successful passage of the Community Mental Health Act, one of the most important laws that led to deinstitutionalization. Reagan was president in 1981-89. Wasn't that well after the mass closings of mental institutions?

Maybe the city could run a

Maybe the city could run a sort of SuperMarket Sweeps type citizen game activity to give these guys an outlet, get it out of their system.