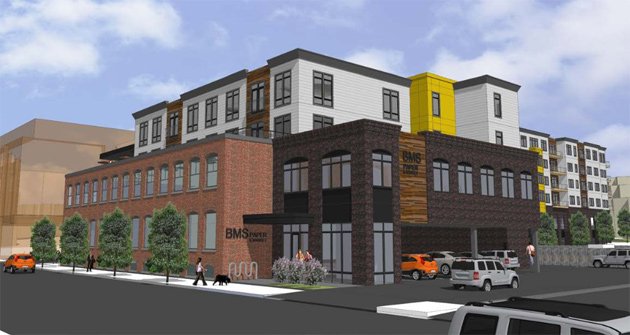 BMS Paper and Market, 3390 Washington St. in Jamaica Plain, this week filed plans with the BPDA to top off its current brick building with 151 residential units and add a restaurant and expand its existing store.

The site is next door to where the Pine Street Inn has won approval for an apartment building - across the street from a landlord who says he is fretful enough about parking to sue to try to stop the Pine Street proposal.

BMS is proposing 44 studios, 68 one-bedroom units, 31 two-bedroom units and 8 three-bedroom units. Some 23% of the units would be rented or sold as affordable - the filing does not indicate if BMS plans to rent the units as apartments or sell them as condos.

The multiple interconnected buildings are organized around a central landscaped courtyard, and the building heights vary and step up from being lower at the street scape (4 stories), to the middle portion (5 stories), to the rear of the site (6 stories) which is buried two levels into the existing hillside.

The restaurant would be on the building's second floor, with a roof deck above it.

The filing describes the architecture of the building:

One of the strengths of the project is that the existing 2 ½ story brick masonry mill-style building along Washington Street will substantially remain in place. This allows the familiar element along the street to continue to be part of the neighborhood fabric. The remainder of the Project will key off the existing building and use similar materials and styling throughout the project. The new retail and residential entries will utilize brick masonry and large store front glass areas to better connect and identify the building entry points to the public. Internally, the lower floors of the new building will continue to use brick masonry at a height and scale similar to the 2 ½ story existing building, as well as utilizing large oversized window and storefront openings to compliment the retail, public, and common area uses within these lower level spaces.

It is simply unconscionable to put that much parking on a congested roadway steps from transit. I am a huge proponent for housing but I will oppose this project unless they cut down the parking by at least half.

Dividing the garage parking by the number of units yields .72 of a space per unit. If you divide it by the absolute minimum number of residents (assuming only one person per one bedroom unit) it's .55 of a space per person. That seems reasonable.

Also, 23% of the units are affordable! That's a big win too.

Washington street will never get wider

"Reasonable" or not, I'm not sure parking ratios are a good metric to use in a environment where roadway capacity is permanently limited.

It certainly looks good on paper compared with the suburban 2:1 ratios - but it all depends on how the neighborhood is being designed. Unfortunately, the City of Boston doesn't provide good tools or policy to allow density without expensive parking options.

In the end, I'll wager this development will build:
- more parking than it needs
- less parking than it wants
- less units than intended due to neighborhood input on "limited street parking".

being built should include parking. As more condo/apartments go up, the parking will get more difficult in those areas. Like it or not, people are still going to own cars even if they are near public transportation. Parking also helps if people are visiting residents of a building. With included parking, visitors won't take up street space that other neighborhood residents need. It will also save grandma from having to park blocks away when she visits her family in the new condo at Thanksgiving bringing with her the family sized portion of her homemade sweet potato casserole or when she comes during the snow storm bearing gifts for all the grandkids at Christmas...

Cities shouldn’t be designed for suburbanites who visit once per year and contribute nothing to Boston except pollution and traffic.

But for many in Boston, especially those who have never lived anywhere else, you can pry the suburban out of their suburban/urban hybrid from their cold dead hands. Car culture is baked-in pretty deep, and it's a shame because Boston is one of the only places in the US outside NYC that's well set-up for car-free living.

...everyone needs a car.

Ignoring the under-considered externalities for a second, here are your options:

Is the parking supposed to be shared with the restaurant/store?

I agree that it's a lot of parking, but it makes sense to potentially have a bit more than usual given the few different roles this building is playing. And BMS customers tend to need to drive a bit more than for other stores in the area, considering you're often buying large bulky products.

Most of it, no

Most of the spaces are in a garage for residents. There's a smallish parking lot, 18 spaces (although at one point the filing says 21), for the store and restaurant.

Huh, ok then, I got nothing

In that case I'm with the first commenter here. No need for 109 car spaces in a building that's literally on a bus line and a couple blocks from a T station. And honestly, 18 might be a lot for BMS even, given that their current lot probably fits maybe 15 cars at most (depending on how creatively you park), and I've never seen it full.

And you'll be there to solve

And you'll be there to solve the problem of lack of parking. Here's a clue, it'll be a long time for transit to snap back from the pandemic.

There's a lot bad about cars, focusing on the traffic feels like it leads to perverse conclusions. After all, if you focus on traffic, then you're treating the problem with cars as being that it inconveniences other people with cars. People shouldn't have dibs just because they got here first.

If you don't build housing in walkable areas, people will live in unwalkable areas where they'll drive even more. And conversely, more traffic has the effect of discouraging people from driving. Less parking would probably be better, but it's not like they're wasting space building a giant parking lot or anything, and when you have less spaces than units, not owning a car certainly gets a nudge. Building something flawed seems like the lesser evil to just having a restaurant supply company with no housing.

Of course. The only way to

Of course. The only way to build is up now. As long as they will stay in business. I still have a restaurant quality stainless steel stock pot I bought from them years ago and it remains my tried and true go-to. I only paid twenty bucks and change!

Of course there will be affordable housing with this building

Once again let us build more housing for the few who can afford the rent.. where is the much needed affordable housing elitist

I'm not surprised that the building is incredibly ugly (I primarily mean the new stuff they're tacking on, although the existing structure was no beauty either). What I am a little surprised at is that these "architects" can't even come up with an original ugly design. This is basically the same repulsive, ticky-tacky, color-challenged look as the monstrosity someone recently built next door to the Jewish temple near Coolidge Corner. That's the ugliest building I've ever seen, and this abomination will be a close runner-up.

When these clowns remember the most basic rule you learn in architecture school, and add a flock of birds to the rendering, I suggest they use pigeons crapping all over their fake brick facade. That would be most appropriate.

I live in the city near public transit. And I LOVED it when I worked downtown. But grandma lives in a place with no real transit, so I kept my car. Then zip car came along, potentially eliminating my need for a car.

But then I got a new job that was, guess what? Not near public transit. So I'm back to needing a car. And oh yeah, even if I still worked down-town (or from home), my wife now works odd hours in the burbs, so we have 2 cars...

We make due. We walk everywhere we can. But please remember that stuff happens and we can't all manage the car-less life.