Man charged with bringing a knife to a fistfight - along with a taser, a baseball bat, a can of pepper spray and a gun loaded with 52 rounds 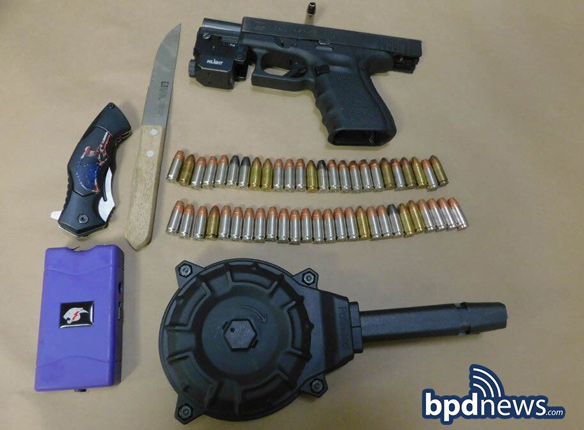 Boston Police report arresting a man they say came to a fight on Fuller Street in Dorchester with multiple ways to dispatch his opponents, only they fled before he could use any and then the cops arrived.

Police say officers responded at 2:23 a.m. to 333 Fuller St., off Morton Street, on a report of a fight among five to seven men, one possibly armed with a taser. As they pulled up, they spotted an SUV parked out front and the driver getting out and locking the doors.

The passengers told the officers that they were involved in a verbal dispute, and that some people had fled on foot towards Morton Street. As the officers approached the driver’s side of the vehicle, they observed a large kitchen knife resting on the dashboard above the steering wheel, as well as a can of OC spray, and a metal baseball bat in the rear of the vehicle. Further investigation into the motor vehicle revealed a purple stun gun underneath the radio, and a black firearm underneath the driver’s seat. The firearm, a Glock 19 Gen 4, with 1 round in the chamber, and 51 rounds in a drum magazine.

that thing brings a lot of "capacity"

to the term, "large capacity".

And I'm guessing you can't carry that thing in the waist band of your sweat pants.

Was he on his way to Washington, DC with that arsenal?

You can tell, because the police were actually willing to arrest this guy before he committed any violence.

While not the latest

While not the latest variation of the Glock brand that tiny handgun retails for over $700 USD. Where you get those drum magazines is beyond me.

But where did he get his

But where did he get his hands on that steak knife?!?

You get them the same place

You get them the same place as the gun.

Wow. Unwieldy but that’s a

Wow. Unwieldy but that’s a lot of shots.
Are those hollow-points? Also a considered choice.
Nasty. Appropriate for violent crime. Huh. How ‘bout that?

Thanks for nabbing this one!