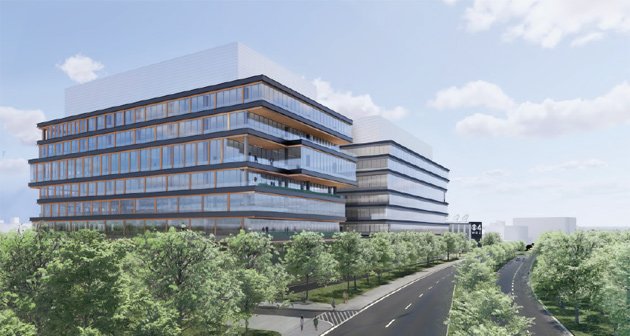 National Development and the Mount Vernon Co.today filed detailed plans for the three-building, 700,000-square-foot complex they want to build on the 6.3-acre Soldiers Field Road site that has been home to WBZ since the 1940s.

National and Mount Vernon hope to begin two years of construction on the first phase of the project, which will include just one of the three buildings and which will let what is now just WBZ-TV get its new studios built right next door to the site. Once WBZ is all settled in and happy, the developers will then tear down its old facilities and put up the remaining two buildings in the project, aimed at providing yet more space for the Boston area's burgeoning life-sciences industry.

The antenna, which had long served as an emergency backup for WBZ-AM, came down last fall, a couple of years after CBS sold off the newsradio station and it moved to Medford.

The project calls for a 700-space underground garage and new walkways between Herter Park and Smith Field.

The Project reimagines the Site through the lenses of community and connectivity, sustainability, health & wellness, and scale, with buildings that reinforce the urban street edge and new open space that creates a publicly accessible corridor through the Site

The developers continue that the buildings will blend in with the surrounding neighborhood, rather than overwhelm it or the riverside park:

The Project building design concept is rooted in simplicity and performance. Taking cues from the highly functional industrial buildings in the neighborhood, the rectangular buildings will fit with the fabric and context of the neighborhood. These simple forms will be distinctive and well detailed and will serve as a calm backdrop to both adjacent parks. The overall architectural concept is completely integrated with the Site and the exterior spaces it creates.

The view from across Soldiers Field Road: Room not fully cleaned. No allowance.

pizza delivery on a busy night.

If it was a uniform surface

If it was a uniform surface you'd probably complain that it was boring and demand a more articulated facade.

What's the deal with "life sciences"?

Seems like every new proposal is for life-science space. Is it just trendy developer-speak, or do they get actual tax breaks or beneficial treatment or something?

There is less of it around than there is regular office space, and biotech in the region is really hot now, so there's rising demand.

I also suspect that it's also appealing to developers because it's well-suited for jobs that can't be done from home. You can update a website or run payroll or write software at home, but autoclaves and tissue culture labs and fume hoods are not in anyone's home office.

So, basically, WeWork for meth labs :-)

no one can get financing for

no one can get financing for residential or office buildings so everything has to be a lab. we are going to be stuck with a lot of huge crap buildings when the bubble bursts

Lookit all the trees!

They're going to install a forest on the median of Soldiers Field Rd!

At least it looks less

At least it looks less offensive than BU's Jenga tower of a data science building going up at BU East. I hope they focus on preserving as much of the existing greenspace as possible, including the mature trees along Soldiers Field.

Dirt bikers, ATV riders sought for violent attack on 80-year-old driver that started on Park Drive in Fenway, ended on Cambridge Street in Allston
You can always tell a Harvard man; you just can't tell him not to become prime minister of Bulgaria
Less than model behavior at Allston bar has owners fuming
You won't recognize the new Mary Ann's - it'll be in Allston, have large windows and small plates, oh, and a new name
Shuttered Mary Ann's could re-open in Allston
Boston University suspends fraternity over sexual-assault allegations