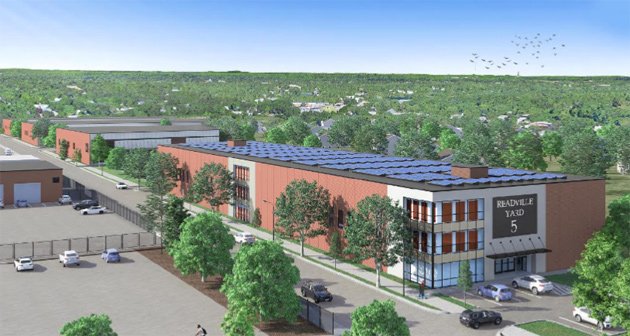 The developer of a series of small industrial buildings atop what used to be a train yard off the Readville train station has filed plans to replace two proposed office buildings with a single self-storage building.

In a "notice of project change" filed last week, First Highland Management and Development Corp. of Dedham asked for permission to combine the two planned office buildings at its Readville Yard 5 project into a single, 93,000-square foot to be used for self storage. Three industrial buildings, and a National Grid facility, have already been completed. This would be Readville's second self-storage facility.

First Highland is asking the BPDA to approve the change without requiring extensive new public hearings and oversight.. It says the proposed change would not mean significant changes in the development's impact on the surrounding area, that, if anything, self storage would mean fewer vehicle trips through one of the Readville train station's parking lots, which is the only way to get to Industrial Drive.

The company says it will complete already planned "pedestrian and vehicular improvements" to the parking lot entrance this spring.

Topics:
Development
Free tagging:
Readville
Ad:
Like the job UHub is doing? Consider a contribution. Thanks!

I made this a few days ago for a reply for twitter, but its fitting here 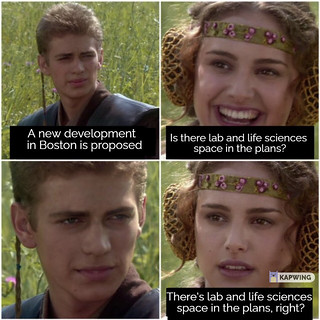 Too bad it can't be a rail yard

The T claimed that it is (or was, pre-pandemic) hard up for midday storage for trains. Too bad they sold this site off in 2014 for $2.4 million to a developer. It certainly wouldn't have been useful for a railroad use or anything.

Awkward business practices shared by organizations that aren't in control of their own destiny.

This actually eludes back to another topic you brought up in the past, a lack of a muscular planning department.

This means it can't act in it's own rational self interest because it doesn't know what that should be. And all that is left are all the political forces imposed on it.

Just a dumping ground for everyone else's problems.

The T hasn't expanded all the

The T hasn't expanded all the way out on the Readville yard they already use, known as Yard 2. They've got a study out for adding another 8 tracks to it within their existing property lines, and if they revoked the easement used by the recycling center next door they could more than double the size of the facility and fan it back out to the banks of the Neponset like it used to be under the New York, New Haven & Hartford RR. It would be an excellent place to erect full-service repair shops for Regional Rail to relieve the maintenance load on maxed-out Boston Engine Terminal on the northside. The T gives Readville a middling rating for pure midday storage because at approx. 9 miles out it's not *central enough* to the terminal for midday equipment shuffles to work without some induced ops awkwardness. The same problem would manifest itself even with full midday Regional Rail schedules instead of peak/off-peak splits, as periodic cleaning & shift-change downtime would still happen plus the total number of trains on the system will be dizzyingly higher at those service levels. But if every more-central site ends up being out-of-reach and they absolutely have to make it Readville-or-bust, they can fit their expanded storage needs entirely in the footprint of an expanded Yard 2. The recycling center is not a hard business to relocate.

While it no doubt sucks that Yard 5 has been coughed up to less-than-stellar land usage via lackadaisical strategy, with that much fungible space left to tap in their existing Yard 2 confines it's not like the T was going to be thinking about Yard 5 for another generation or more.

Storage is a poor use of this land when the obvious answer would be build more light industrial space & gear it towards small and mid sized businesses instead of the large tenants they're currently pursuing. Their current buildings are set up to be big singular spaces, and they're not interested into subdividing into chunks that are smaller than 15-20K sq ft. This is great if you're a big company, but there are lots of small and mid sized businesses that don't need and can't afford spaces that big.

Self-storage might be the best way to maximize ROI, but it doesn't mean it's a good use & I believe shouldn't be permitted for what's already scarce industrial space in the city.

What a waste to have it as storage space for people’s belongings. Terrible idea.

The T is not a transportation company

It is a real estate company for well connected developers.

Wu wants to be a transformative

Leader. Here your chance, put a halt to all development except housing.

There are already several hundred residential units approved on either end of the Readville train station (which raises the question of whether the station will continue to be underutilized because of a fare structure that would make using it for commuting cost several hundred dollars a year more than the station a mile away at Fairmount, but that's another issue).

Part of a Hyde Park re-zoning effort a few years ago was an attempt to keep parts of the neighborhood, such as, oh, a former train yard, zoned for light industrial use to try to encourage the sort of development the Yard 5 builders originally promised: Light industrial concerns that could provide jobs for people who don't want to or can't work at financial firms downtown.

No -- The Mayor has no idea what is needed

No -- The Mayor has no idea how much of what kind of housing or any other kind of buildings that the City of Boston needs to permit. Only the integrated independent decisions made by all of the property owners and potential owners can provide that answer.

So let's assume that the new Mayor is "transformative" and stops allowing the current mix of Labs, Offices, Retail, Residential and Light-Industrial facilities to be build and only permits housing development.

Soon all of the developers currently pouring billions into Boston would go elsewhere -- where they had a freer hand. Soon after that the companies whose growth was fueling the other types of development would start to go elsewhere. In the short term -- less housing would be created as development slowed.

The next consequence is that most companies which were still here would stop expanding here and start transferring operations to other locations where they could expand and transform as needed. With fewer opportunities for professional and career development -- Boston would attract fewer professionals from other areas and there would be less demand for higher end housing.

Eventually -- the people who come here for the educational opportunities and stay for the jobs would realize that they might do almost as well somewhere else where there were more job opportunities after graduation.

End result of the plan -- lots of available low cost housing [including formerly fancy housing] as the City started to shrink in population and stagnate again.

We've been down this road before several times. In due course -- assuming that our Great Research Universities were still at the forefront of knowledge creation -- perhaps someone would become the Mayor and begin to enable development again. This time the leading industry would be....????

And while you may refuse to acknowledge the fact, Boston has grown fairly substantially over the past two decades with some of the most complex zoning codes in the country - and despite some heavy-handed efforts by the last two mayors to effectively create the sort of spot zoning you crave for individual projects they favor (or hate - see the never-ending Aquarium garage saga).

Done well, zoning doesn't inhibit growth, but encourages growth that doesn't drive most of the residents out of the city because they can no longer afford it. Boston may be one of the smaller big cities in the country, but it's still large enough to support everything from skyscrapers to even single-family homes, with everything in between. Zoning can help keep it that way.

How about some much needed

How about some much needed housing?

The so-called 5-Yard is partly in Boston and partly in Dedham. So there are two municipalities at play there for many items.

I'd best-guess that this yard has been under the development umbrella for at least 10 years now and maybe more. The plans have changed many times.