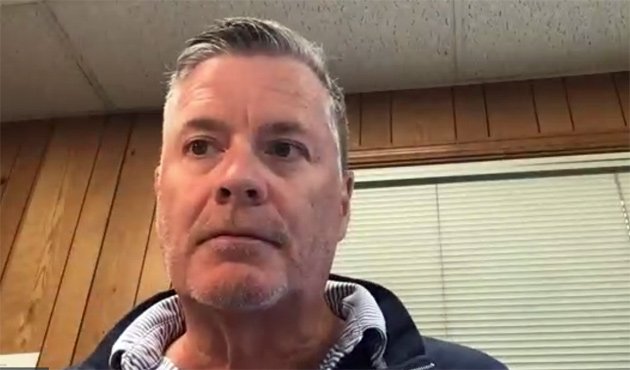 Douglas Bacon explains plans for new restaurant where Regina Pizzeria used to be.

Douglas Bacon, who already owns eight restaurants in Boston, is hoping to turn the former Regina Pizzeria in a historic former train depot at 353 Cambridge St. in Allston into a neighborhood restaurant and bar featuring basic American fare.

Bacon described his proposal to buy the former pizza place's liquor license to the Boston Licensing Board today. However, he asked the board to hold off voting on the proposed license transfer until after he meets with the Allston Civic Association on May 18.

Regina Pizzeria closed at the start of the pandemic. After it closed, it seemed for a time that the closed Great Scott music venue would move into the space. The former Great Scott booking manager, who had raised close to $300,000 from investors for the move down Harvard Avenue has yet to say if he's looking for another location now that Bacon is on record as the new operator of the space or if he will return the money to investors.

Bacon, who said he has yet to come up with a name for the eatery, said he is planning on serving lunch and dinner until 2 a.m. - he said the kitchen would be open until then - with brunch on the weekends.

He said he would love to open his restaurant by fall, although he said that given the lead times on the furniture and other fixtures he's ordering, re-opening might not be until the end of the year.

Bacon told the board he's particularly excited by this newest restaurant, because "this is an iconic location" and a "historically significant building," one that was designed by H.H. Richardson as a train depot. He said he hopes to "restore and highlight some of the beautiful architectural elements in this amazing building."

Same as it ever was

The building was initially converted into the Allston Depot steakhouse in 1972 by the Arcands, who still own it. It was changed to the Sports Depot at some point in the '90s, spent a year as Captain Fishbones in 2003 before returning to the Sports Depot until 2010, when it became the Regina's until the pandemic. So going back to "American fare" would basically be going back to the original concept, albeit probably with less steak and more sports on the teevee (because every restaurant in Boston seems to be constitutionally obligated to have at least seven teevees).

i loved that place. great burgers. i went in one night and Tank from wbcn was doing trivia. i answered a question correctly and won a bruins practice jersey which was pretty cool but it had a huge bud light logo on the back. about 10 minutes after i won it PHIL ESPOSITO walked in with his wife!!! phil autographed my bruins jersey (the front) i loved that place.

Should I make another prediction?

Back in '03, I told the owner of Sports Depot not to convert to Captain Fishbones.
In '04, I was right and he switched back to Sports Depot.
In '10, he sold out to Regina and I said...

I hope this isn't the same mistake again. Much like seafood, it's not like there aren't a ton of Italian joints in this city...but still very few true "sports bars". Unfortunately, I doubt Regina's will fold as easily as Fishbones.

And now we're getting an "American" restaurant. I *hope* for their sake there are lots of TVs playing sports (making a sports bar/restaurant). Because that's what that area needs. You shouldn't have to go to the suburbs to sit in a Buffalo Wild Wings just to see 2-3 games at once with a group of friends. Encore knew this, which is why they put up like the biggest sports bar around (to go along with their moving into sports bets). It'd be nice to have something similar closer to home on the west side of the city as well. We used to...it'd be good to have it back.

...about not having to go to the suburbs to watch games, and if you are I'm taking the bait, but: Do you need to leave 617 anymore to watch a bunch of games on a bunch of TVs?

My recollection is that when Sports Depot opened, it was a lot less common to see multiple TVs in bars. Nobody local (as far as I remember) approached the cathode overload of Sports Depot at its peak, but it did seem like many, many other bars added TVs, such that you didn't need to sit in a particular spot to see several at once.

This match anyone else's experience?

Yea but that place is oddly shaped though....

And what gives it charm is that back room overlooking the tracks, and those large circular booths (imo).

Correct me if I'm wrong but didn't they used to have two bars? Or was the bar was on the right side when you came in?

And is it much different that what the White Horse and Tavern on the Square has done with lots of large TVs? Also having flashbacks of the old "Big City" place on Brighton Ave. I thought that place would have been a perfect spot for a sports bar.

In favor of any venue respecting the history of the building by decorating the interior with historical photos of the depot, other depots, and historic photos of the Allston Brighton neighborhood that surrounds it. I am willing to help as curator of the Dirty Old Boston social media pages.

That's a huge bummer. It's well situated for a place that could make a lot of noise without bothering the residential neighbors, what few of them there are. I really hope Great Scott can land a space that's still in Allston, but I think they will be challenged to find something as well-suited as this building.

If not, maybe someone in DTX will finally decide that having something, literally anything, in place of a years-empty space could be worth giving Great Scott a deal on the rent. There's no shortage of spaces to choose from there and you'd easy get access to nearly all the major transit lines. Plus, almost zero neighbors to complain about noise after 6pm.

Old Woolworths would be perfect for Great Scott

The long-vacant former Woolworths would be a perfect spot. It has zero residential neighbors and shares the same basic neighborhood as the original location. It's also a nice large place that could hold a lot more people than the old spot.

Live on Park vale. That’s one block & about 30 feet higher than Harvard, meaning the buildings across the street from this do not block the noise. Even if they were good about containing it, the parking lot adjacent to the Blanchard parking is broadcasting directly into our bedrooms Thursday through Saturday. People behave poorly the rest of the week but when they go out to the bars & the concert venues in the area and park there, the volume goes up considerably. People party in that lot, opening their car doors & trunks and blast the music. They shout and get into fights. There are neighbors in the area.

Idk I lived on that street 20

Idk I lived on that street 20 years ago, then it was loud. I got over being around loud and moved to a different neighborhood. Allston should be loud IMO

when you're sleeping elsewhere (and are able to)

And it'd be the easiest load-in/load-out ever for bands at Studio 52!

Interesting idea about DTX, but there are actually lots of residential places there. And I don't mean just the obviously ones like Millennium Tower. You'd be amazed that some of the most decrepit or industrial looking buildings around there, like on Chauncy Street, have the most gorgeous, luxury residences within. Often with very inconspicuous entrances.

And will be much higher soon with the planned construction in the area. With the rents they’ll charge, not likely they’d put up with the noise.

In an historic American building

there should be an American restaurant, serving hearty American food. I'm sick of all these chic multicultural bistros serving god knows what to unsuspecting red-blooded American citizens. We must protect our precious bodily fluids.

Many of us Great Scott regulars were excited for that site to take over as a music venue. Alas, boredom wins again.

Spot behind in the train yard

It's too bad this spot is no

It's too bad this spot is no longer a train station. It's the obvious place for one, much better than Boston Landing or West Station: a commercial area surrounded by dense housing, right on through streets with buses in every direction.