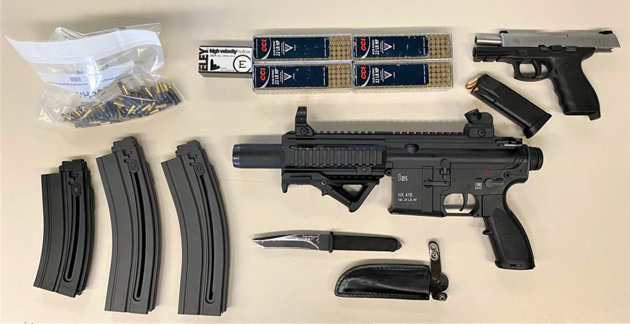 Boston and State Police report arresting three men on gun charges in two incidents on Adams Street in Dorchester less than two hours apart overnight - with one of them after he was allegedly driving around Dorchester with two guns, more than 500 rounds of ammunition and a knife.

Shortly after 11 p.m., Boston Police report, officers responded to report of guys with guns hanging around on Adams Street near Leedsville Street, across from Ronan Park.

The officers found four guys smoking marijuana while sitting on the wall in front of the park:

Officers approached the males and observed a green backpack sitting behind the wall within reach of one of the males. As officers reached for the bag, one of the males stated that the bag belonged to him. Officers picked up the backpack and immediately felt an object consistent with a firearm. Inside of the bag, officers recovered a Ruger .44 Magnum Super Blackhawk revolver loaded with 2 rounds of live ammunition. At this time, officers attempted to detain the males, safely placing one of them in handcuffs. One of the males suddenly stood up on the wall and began running away from the scene. The male fled up the ramp leading into Ronan Park, officers observed the male fumbling with his waistband. Officers continued to pursue the male, who removed an un-holstered firearm from his waistband. Officers grabbed the male, causing them both to fall to the ground, while the male suspect dropped the firearm and a cell phone he was carrying. The male scrambled to his feet and continued to flee. Officers were able to apprehend the male in front of 116 Adams Street. The two additional males were identified and released from the scene. Officers recovered a Ruger SR22 firearm loaded with two rounds of live ammunition.

State Police report a separate gun arrest, around 12:45 p.m. on Adams Street. State Police say a trooper noticed a car with broken license-plate lights. When the driver acknowledged having a suspended license, the trooper ordered him out of the car - he then ran away, only to be caught by the trooper and several assisting Boston officers.

An inventory of his car found :

In the center console, a Taurus PT 24/7 Pro .45 caliber handgun, with a round in the chamber and an additional round in a high-capacity magazine capable of holding 12 rounds. In the backseat was a black laptop bag that, when handled, appeared to contain another firearm. Inside the bag the Trooper located a loaded .22 caliber assault-style pistol with an inserted magazine loaded with 29 rounds. The Trooper also found in the bag two more magazines, one loaded with 33 rounds and the other with 29 rounds, as well as an additional 450 rounds of .22 caliber ammunition. A knife was also located in the car.

What is all the extra crap on that larger pistol? Is

any of it functional, or simply designed to make it look scarier?

It's a .22 so not "powerful" but certainly dangerous eniugh. Also, 22 ammo is cheap whoch helps explain having so much. It's sold in boxes of 500.

Square thing in front of trigger is magazine well or holder. In from of that - I think- is a folding handle.

2 things on top are sights. Not certain how fancy those are but I doubt street criminals use sights much.

I guess it's all functional stuff if you're paying enough attention.

*I'm not a gun expert but familiar.

It’s an assault rifle without

It’s an assault rifle without the magazine inserted. And the extra crap is very real....for accuracy. Bottom line, it’s designed to kill or at least shoot many targets at once

I can't identify it from that

I can't identify it from that picture, but looks awfully similar to the HK MP5 https://en.wikipedia.org/wiki/Heckler_%26_Koch_MP5, perhaps a variation. If true, that really WOULD count as an assault rifle (a submachine gun!)

I mean it's a .22 so for the most part yes, sort of, in a sense that .22's don't do much damage relative to other larger caliber rounds, but you could still do damage and obviously even kill someone with it. I'm not too familiar with Heckler's but I believe it looks like it may have a suppressor (aka silencer) on it, but maybe someone with more knowledge of this gun can correct or confirm that. I would say it's not as scary as it looks though, but you know a gun's a gun.

Just crap to make it scary

Just crap to make it scary looking. It is an AR-15 style 22 caliber handgun (and possibly a violation of federal weapons laws with the forward grip), also illegal in mass (mostly because it looks scary). It would actually be a far less effective weapon than the conventional semi-auto handgun above it.

I think in this case it just means "assault-style rifle" minus a stock and a long enough barrel to make it accurate at any distance that doesn't fit under a roof.

Note that "assault-style rifle" is basically a term for "scary-looking black gun", so you've basically understood the essence of the term.

If the US wanted to have a meaningful discussion about firearms regulations, it would have to start with all parties understanding such basic terms as automatic vs semi-automatic as it pertains to firearms, and then understanding that the status quo is that there are about a zillion legally owned semi-automatic weapons in the country. Since banning them is a logistical impossibility and since the people calling for the bans largely don't understand what they're asking for, we end up with "scary-looking black gun" bans that are functionally meaningless.

That Space Force looking pistol is a .22?

Instead of pulling over

Instead of pulling over people with busted license plate lights, it would be nice if the police instead pulled over more people for speeding, unsafe passing, distracted driving, etc.

Which is why you shouldn’t do them around a cop.

I’ll take getting guns off the streets anyday please.

They already found one gun and he's fumbling in his waistband?

I would not want to be a cop, crazy stuff.

since it appears that a section of the spine of the knife is either sharpened or narrowed as well, possibly making it a "double-edged knife". (Can't quite tell from the picture.) I'm actually not much a fan of this law, since there are plenty of practical, peaceful reasons to have a very short section of the tip be double-edged, but MA law is weirdly strict on this and forbids it.

Boston is simply a dumping

Boston is simply a dumping ground, Sober House on Draper, Percival and Hamilton, poverty policy and freed bring anti-social into once vibrant neighborhoods that will never be vibrant again. . So sad.

Now that the firebug has been apprehended Roxbury has risen. It's a cool Boston neighborhood.

Any excuse to pull a black man over

He noticed a broken license plate light at 12 o’clock in the afternoon.
Let’s be real, that was an excuse to pull him over and check him out, which was a good traffic stop. But anyone who knows knows what these officers do in the hood knows that is BS.

Any excuse to pull a black man over

He noticed a broken license plate light at 12 o’clock in the afternoon.
Let’s be real, that was an excuse to pull him over and check him out, which was a good traffic stop. But anyone who knows knows what these officers do in the hood knows that is BS.

Yes, let's be real, a broken

Yes, let's be real, a broken license plate light is a valid violation of the vehicle code. The driver provided the cause. If you can't do the time, don't do the crime.

My number one question every time I read these news stories on here or bpdnews are how/why are all these guns in boston?? There was a story a little while back about some dudes that were caught coming into mass with a bunch of guns from out of state (to sell illegally)... There are not enough of those stories.

No there isn't. I dont know

No there isn't. I dont know why this is virtually never the part of the story we hear about.

I wonder what state(s) is

I wonder what state(s) is responsible for loosely selling these guns and sending them to our commonwealth.