Two shot on Whitfield Street in Dorchester, one dead

Boston Police report two men were shot at 68 Whitfield St., shortly before 2:30 a.m. Both were taken to local hospitals, where one died and the other is expected to survive.

Around 10:10 p.m. on Brenton Street at Greenwood Street. Injuries not considered life threatening.

Man tried pulling a loaded gun on officers in Dorchester, but they managed to grab it away, police say

Boston Police report arresting a Dorchester man - who was wearing an ankle bracelet - after a report of gunfire in the area of Evans Street and Capen Street in Dorchester around 11 p.m. on Monday. Read more.

Person shot in the face in Mattapan

Live Boston reports the person was shot shortly before 9:20 p.m. on Astoria Street near Elizabeth Street.

Boston Police report they are investigating whether a man arrested with a gun not long after gunfire on Mountain Avenue in Dorchester is the man who shot a woman who got to a local emergency room with a gunshot wound early Saturday. Read more.

Boston Police report arresting a man they say fired shots during an incident on Centre Street in front of the Mildred Hailey Apartments that left one man dead and another hospitalized on May 20. Read more.

Boston Police report arresting a Randolph man and a Jamaica Plain 17-year-old on gun charges early this morning after foot chases, one of which ended when the suspect tripped and fell, allowing pursuing cops to catch up to him. Read more. 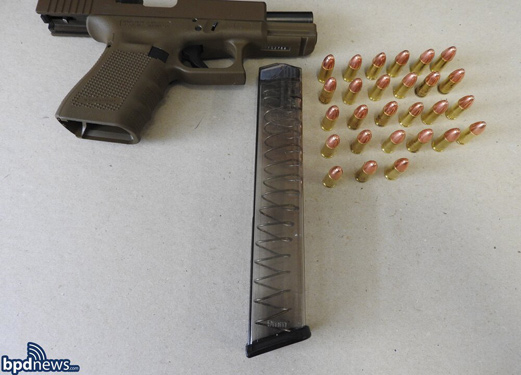 Boston Police report gang-unit officers responding to a report of a fight at 30 Linsky Barry Ct. in the West Broadway development Thursday afternoon didn't find anybody fighting but did find several guys hanging out and one "crouching behind a wall attempting to avoid contact with police." Read more.

One shot, one stabbed in Newmarket Square

Shortly after midnight, two people got themselves into the Boston Medical Center emergency room, one shot, one stabbed - just as victims were arriving by ambulance from the quintuple shooting at the Franklin Field development. They told police it happened somewhere on Massachusetts Avenue in Newmarket Square.

Five people shot at Franklin Field in Dorchester, one dead

Shortly before midnight at at 5 Ames St., between Ames Way and Westview Street. Read more.

Around 11:30 p.m. by a guy wearing a black mask who fled down Jamaica Street and St. Rose Street. Not long after, police nabbed a suspect at South Street and the Arborway. Read more.

A federal judge yesterday gave Joquentz Constant, 24, of Dorchester, one last chance to turn his life around: He freed Constant from federal custody after he'd spent nearly 19 months behind bars awaiting trial and then sentencing on a gun charge, on condition Constant live with his former Marine brother in Brighton, who said he will support and guide Constant as he earns his GED and works toward a permanent full-time job - with help from Constant's other brother, an Army lieutenant. Read more.

Transit Police report arresting a Weymouth man they charge got angry at somebody else for refusing him a lighter and so whipped out a gun to make the point he really needed that lighter, shortly before 9 a.m. on Friday at the Maverick T stop. Read more.

Boston Police report a man ordered out of a car during a traffic stop at Centre Street and Columbus Avenue Friday afternoon had an unloaded gun in his pants. Read more.

Shots fired at Silloway and Mather streets in Dorchester

Shortly after 10 p.m. A car was found crashed into a pole and abandoned just down Mather Street not long after.

Police: Drunk guy with gun tries to flee scene of gunfire, is arrested

Boston Police report that officers on patrol around 12:15 this morning heard gunfire coming from Livingstone Street off Blue Hill Avenue - and spotted a car pulling away with its lights turned off. Read more.

Two shot, one fatally, on Centre at Lamartine in Jackson Square; four arrested

Two men were shot at Centre and Lamartine streets around 10 p.m., according to Stanley Staco and Mark Parkinson, who reports one died. Read more.

Gunfire on Washington Street at Blue Ledge Drive in Roslindale

At Washington Street and Blue Ledge Drive, just north of the Burger King and Nick's, around 10:40 p.m.