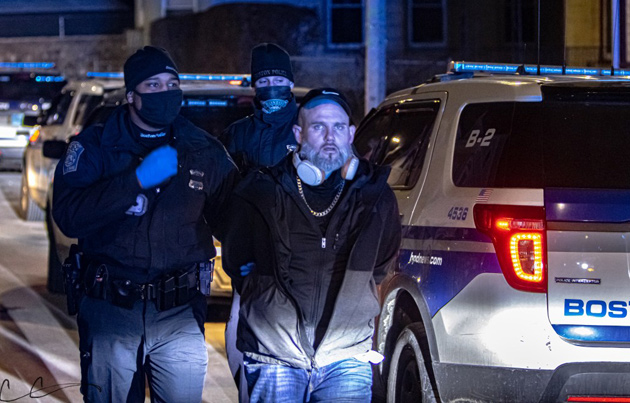 Boston Police report arresting a Quincy man on charges he smacked somebody in the head with a BB gun to take their car near Boston Medical Center, then led police on a chase that ended when he turned onto a dead end in Uphams Corner.

Police say that shortly after 1 a.m., Jeffrey Haslett, 36, asked somebody on Massachusetts Avenue near Washington Street for a ride to the area of Boston Medical Center, and the person agreed to drive him the block or so down Mass. Ave.

As they arrived near Boston Medical Center, Haslett became very violent and struck the victim in the back of the head with what appeared to be a firearm. The victim stated that he was in fear for his life, so he exited his vehicle. Haslett then climbed over to the driver’s seat and drove off towards Washington Street.

Police say an officer on patrol heard the radio call about the incident and spotted the car at Hampden Street and Melnea Cass Boulevard and then watched the car turn onto Hampden and speed off towards George Street:

The officer activated his emergency lights and sirens, in an attempt to conduct a traffic stop. The suspect refused to stop, and continued traveling on Shirley Street to Dudley Street until turning onto Wendover Street, where he was forced to stop at a dead end.

Haslett exited the motor vehicle with his left hand up in the air and his right hand down by his leg, holding what appeared to be a firearm. Officers ordered Haslett to drop the weapon, to which he complied, and placed the firearm on the ground. The officers retrieved the firearm and placed Haslett under arrest.

Further investigation determined the firearm to be a BB Gun.

Haslett was charged with carjacking, assault and battery with a dangerous weapon, speeding, operating with a suspended license, failure to stop for police, running a stop sign, and reckless operation. He also got a ticket for his bad driving, police say.

There's more to this story

I don't believe the car driver and Haslett just casually met as described.

Did I say casually?

I agree, it sounds like the two knew each other, because I know if I happened to be on Mass. Ave. at 1 a.m., I wouldn't be opening my car to a complete stranger, especially if I knew he was just going to BMC, which is a block (granted, a relatively long block) away.

But that doesn't detract in the least from what he allegedly did.

You didn't. My word.

I wasn't trying to accuse you of anything. This man has quite the criminal record going back to when he was a teen. Anyone want to wager he was raised in a dysfunctional broken single parent home? I think it's a slam dunk.

The driver was probably trying to buy heroin and this guy just jumped on the opportunity to jack the car.

Another graduate of Masshole

Another graduate of Masshole U.