State Police report a woman driving north on Rte. 1 in Peabody escaped injury last night when somebody who'd been tailgating her pulled alongside her and shot at her, but missed. Read more.

A Peabody High School employee was placed on leave after he brought his home laptop into school, plugged it into the projector system in one classroom and promptly showed "a series of explicit images from what appeared to be a Google Image search."

The Salem News reports a Peabody woman called 911 to report an intruder in her home because she was smelling BenGay. But a responding officer "reported there was no BenGay in the building and all appeared to be in order."

That's probably not going to buff right out 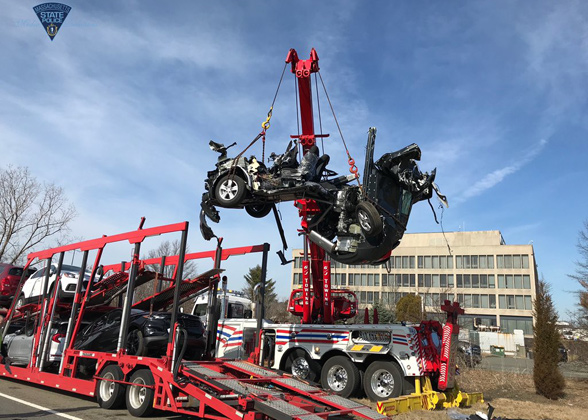 State Police report the driver of a car carrier somehow managed to clip the undersides of the Endicott Street and Rte. 114 overpasses on 128 south in Peabody this morning, destroying what used to be a 2020 Chevy Trax.

A concrete reason to avoid Rte. 1 north in Peabody today

State Police report having to shut down Rte. 1 north at Forest Street around 2 p.m. "due to a cement truck that spilled a load of wet cement across the roadway."

An anti-Semite drives around Peabody in a pickup

The Jewish Journal reports the city of Peabody has scheduled a solidarity rally for City Hall at 4 p.m. this Wednesday following an anti-Semitic incident on May 25:

[Rabbi Nechemia] Schusterman said that while out on a walk with Rabbi Sruli Baron, a man in a loud pickup truck swore at him and threw a penny at him and dared the rabbi to pick it up. 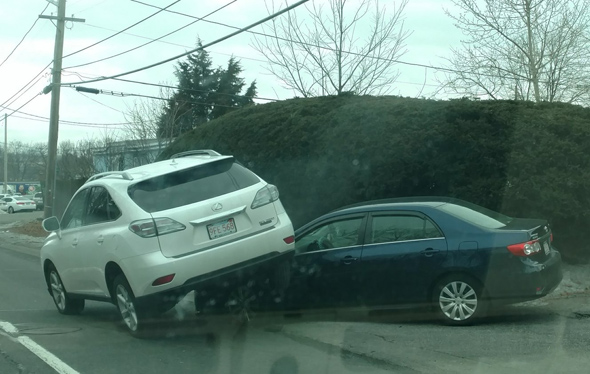 There's probably a good story behind this photo that Craig Caplan took on Rte. 1 in Peabody at lunchtime today. Note the involvement of a white SUV, similar to the white SUV involved in that other notable recent incident that made all the papers and the national news (although granted, this is a Lexus; the other was an Infiniti).

Kojak corners suspect on trailer-park roof next to Golden Banana

Cat on a hot tin roof, sort of. Photo by State Police.

State Police report a chase that began in Malden this morning ended in your basic Rte. 1 cliche of the sort we're going to miss once the road is completely turned into a valley of fancy condos and big-box stores. Read more

The Salem News reports the city's mayor has drafted regulations that could make it difficult for the rideshare service to keep sharing rides there.

Peabody Police report they are looking for a guy who shoplifted $400 worth of Red Bull from the local Hannaford supermarket on Monday.

Suspect appears to be wearing a blue jacket with COACH on one side and DANVERS BASBALL on the other.

Mulch madness: Tons of mulch erupt in flames, shut down 128

Photo by the Salem Evening News.

The Supreme Judicial Court ruled today that teachers who chaperone ski trips shouldn't have to worry about medical bills if they suffer their own ski injuries while monitoring slaloming students.

The ruling comes in the case of a Peabody math teacher injured during a 2004 ski trip - whose medical bills the city of Peabody had refused to pay.

Karen Sikorski, a math teacher at Peabody High School, suffered a shoulder injury that required two operations and physical therapy on Jan. 24, 2004. The city which is self insured, argued she was skiing "recreationally" at the time and refused to reimburse her for her treatment.

Karl reads how Peabody police officers got 9/11 declared a day of overtime in exchange for drug testing, says he doesn't get it:

... I can see NYC police (and fire, and paramedics) fighting for such a thing since, you know, since they were the actual people who a) helped at the site and b) lost hundreds of their peers that day. But Peabody? ...

Perhaps it's time to move...

For the third time in a little over a year, residents of a Peabody apartment complex were forced to flee as their flame-plagued complex caught fire again.

A three-alarm blaze broke out on the roof of a building at the Highlands at Dearborn yesterday after a lightning bolt struck.

Timothy Haroutunian works in Peabody and saw the fire on his way home:

... I was stuck in the traffic and when I looked over and saw the flames and the apartment burning, it looked awful.

One of my friends from work lived there and lost everything. Not only did she lose her apartment and all her possessions, she also lost her two cats who were trapped inside while she was at work. We are setting up a collection at work to help her. ...

A traffic tie-up that really stinks

The Globe reports that a tractor trailer hauling garbage overturned at the interchange of Rte. 1 north and I-95 in Peabody during the morning rush hour today, closing the ramp.

Garbage trucks had to be called in to haul off the stuff. What happens if one of them overturns?

Under the Golden Dome rains on Mitt Romney's Peabody sympathy. Seems that after the last time Peabody flooded (all of two years' ago), Romney vetoed a measure to spend $5.7 million for flood control in Peabody - money that would have meant an additional $20 million in federal aid for the work.

But, hey, at least the flooding's good for a laugh

Trapped in her house

Honk reports from her home in Peabody:

... Peabody is notorious for flooding but this is easily the worst I've ever seen and it's still fucking raining. Numerous businesses downtown are completely flooded and the damn water keeps rising. It's a little scary, to be honest. Our garage has over four feet of water in it and you can see things floating around in there. ...

She had to promise a friend that if the waters keep rising and she has to go up to the roof, she won't misspell "HELP."