Brighton could get its first legal BYOB restaurant

A sushi place in Brighton Center goes before the Boston Licensing Board on Wednesday for permission to let customers bring in their own wine and beer. Read more.

Two restaurants go into the liquor-licensing arena, only one emerges with a license 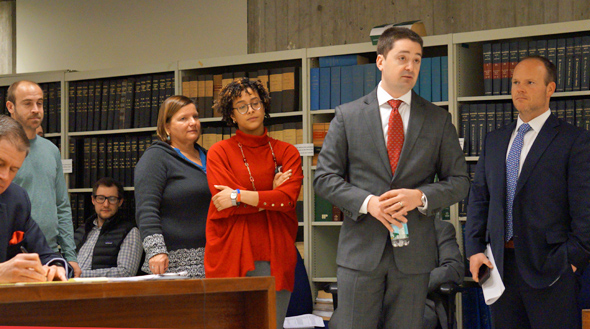 The Boston Licensing Board today chose an existing Mission Hill Thai/sushi restaurant for the one liquor license it had over a proposed shaken-seafood place in Roslindale. Read more.

Assholes up from New York get Chinatown restaurant in trouble

The Boston Licensing Board decides Thursday whether the young women staffing Crave Mad for Chicken on Kneeland Street should have been more assertive in trying to get a bunch of obnoxious men from New York out when they refused to leave at closing time, and if so, what punishment to levy. Read more.

Cleveland Circle could get high-end sushi and hibachi place

The owners of four suburban sushi and Japanese-grill restaurants in the suburbs have proposed turning the vacant old Citibank branch at 1924 Beacon St. into their latest restaurant. Read more.

Matt Soleyn hooks us with the news that Haru Sushi Boston is no more.

So where can I get a sushi burrito in Boston?

South Boston could get another sushi place

The Boston Licensing Board decides Thursday whether to grant a full liquor license to the sushi restaurant Michael Shaw wants to open where Salsa's used to be on Dorchester St. Read more.

South Boston Waterfront to get a moving sushi experience; East Boston to get 11 flavors of chicken wings

Yo Sushi, a British sushi chain, is bringing its conveyor-belt sushi - in which plates of food glide around diners who pick what looks good - to 79 Seaport Blvd. Read more.

UPDATE: Wabora passed a re-inspection on Aug. 8 and was allowed to re-open.

A Boston health inspector today shut Wabora, 254 Newbury St., for a variety of violations that included raw tuna and salmon being kept too warm, a food preparer not washing his or her hands and another handling vegetables with bare hands. Read more.

The Voice of Downtown Boston introduces us to PABU, a San Francisco Japanese restaurant that will open on two floors of the Millennium Tower next fall.

The modern izakaya and sushi bar will feature market-fresh menu with fish sourced locally from New England and flown in fresh from Japan’s famous Tsukiji market.

How about some sushi, eh?

The Boston Licensing Board recently granted the owner of an Ontario sushi restaurant permission to move into the space occupied by a homegrown sushi place on Newbury Street.

Wabora Sushi can operate under a temporary Boston license until it receives final approval from the state Alcoholic Beverages Control Commission to serve beer and wine at 254 Newbury St., where it will use the license it's buying from Ikura Sushi at the same location.

State Street Sushi will be open 10 a.m. to 9 p.m. if the Boston Licensing Board tomorrow approves its request for a food-serving license. Nobody opposed the granting of a license at a hearing this morning.

Boston Restaurant Talk reports Enzo Sushi on Kneeland Street has shut down its conveyor belt for the last time.

For those of you with oval ACK stickers on your cars

Liz recounts a sorry lunch at Osushi in Copley Place:

This place is only surviving on Groupon deals and unaware conference attendees. Don’t go to Osushi (it's difficult to find in the mall, so maybe if you tried to go, you gave up and went somewhere else, anyway). There are plenty of less expensive sushi places in Boston that have fresh fish and good service.

Malden woman sues over sushi roll she says made her sick

A Malden woman who says she's been unable to return to work since eating a bacteria-laden sushi roll at a Cambridge restaurant in March has sued the raw-tuna distributor she says is to blame.

Brandy Feeney is seeking more than $75,000 (plus lawyer's fees) from Moon Marine of Cupertino, CA, which on April 13 announced a recall of its "Nakaochi Scrape" product because it was infected with a bad strain of salmonella from yellowfin tuna caught off India. Scrape is the stuff left over on fish bones after the main part of the fish has been processed, and is typically disguised with spices and other things in "spicy" sushi rolls.

The owners of the Ginger Exchange in Inman Square go before the Boston Licensing Board on Wednesday for permission to buy the Savant Project's beer and wine license from the bank that now owns it and turn the 1625 Tremont St. location into a sushi joint that promises to "inject a not-so-subtle element of fun and interest in the pure enjoyment of good food."

The Boston Licensing Board today approved plans by Snappy Sushi to move into larger quarters and buy the beer and wine license owned by Sorento's, an Italian restaurant burned out of Peterborough Street last year.

Snappy Sushi is moving from its current location at 144 Newbury St. to the former Tealuxe at 108 Newbury St. at Clarendon, where it will have 44 indoor seats and 32 seats in a seasonal patio.

The Neighborhood Association of the Back Bay supported the liquor-license transfer.