The Boston City Council could decide Feb. 15 whether to seek approval from the state legislature for a plan that would shift the Boston School Committee from a board appointed by the mayor to one elected by residents - plus a student member who would be able to vote on school business. Read more.

The Boston City Council was able to vote on a proposed new map of district council seats yesterday after a Suffolk Superior Court judge rejected a bid by a South Boston man and several South Boston groups to block the effort over alleged open-meeting-law violations by councilors. Read more.

Ricardo Arroyo this afternoon got his redacted BPD file, from which he released some documents including e-mails from both BPD and an assistant Suffolk County prosecutor declaring there was no case. Read more.

Caroline Goggin at WHDH reports on an order by a Suffolk Superior Court judge today that orders BPD to release the redacted contents of a 2005 BPD file on an investigation into what Ricardo Arroyo did or didn't do to two fellow O'Bryant students in 2005. Arroyo, running for DA, says he didn't do anything and didn't even know there had been an investigation until the Globe contacted him this year.

In a contentious meeting in which Council President Ed Flynn had to keep banging his gavel, telling both councilors and residents to keep quiet, Councilor Frank Baker withdrew his demand for a look at the BPD file on sexual-assault allegations against Councilor Ricardo Arroyo, saying his point had been made by today's Globe interview with a woman who claims Arroyo sexually attacked and threatened her in high school. Read mroe.

Woman who claims Arroyo attacked her talks to the Globe, Arroyo seeks release of BPD reports, Wu unendorses him

The Globe interviews one of the two women BPD allegedly investigated DA candidate Ricardo Arroyo for attacking when they were in high school, and that she stands by her story of "the coerced sex, the mental manipulation, threats she said he sent her." Read more.

Leaders of JP Progressives, which endorsed Ricardo Arroyo for Suffolk County DA earlier this month, report they spent more than two days this week trying to figure out what to do after news broke of the sexual-assault allegations against him. Read more.

Somebody dropped some paperwork on the Globe about two investigations into alleged sexual attacks by City Councilor and DA candidate Ricardo Arroyo when he was a student at the O'Bryant School. Read more.

The City Council yesterday unanimously approved using eminent domain to take roughly an acre of undeveloped land on the shore of Sprague Pond for a park, after one councilor assured the others that city officials will offer a fair price to the current owners - a key concern in a city with a history of eminent domain being used to destroy whole neighborhoods for apartment towers and highways. Read more.

A City Council committee will consider a proposal for Boston to build a digital marketplace that local small businesses, including restaurants, could use to offer their wares as a way to compete with the big providers. Read more.

The Boston City Council today passed an ordinance that would ban people from regularly swarming a particular person's house to scream and make noise between the hours of 9 p.m. and 9 a.m. by a 9-4 vote. Read more.

With West Roxbury Municipal Court on alert, BPD will be monitoring sound levels outside Mayor Wu's Roslindale house when she leaves for work this week to ensure that if protesters keep showing up to call her names, they do it at low volume. Read more. 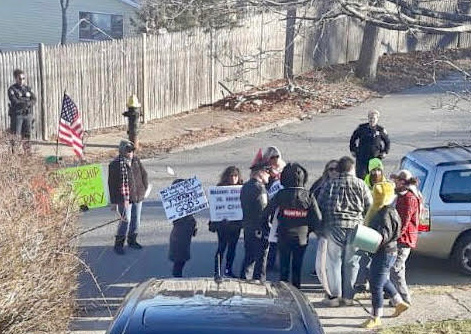 They've already screamed their lungs out at the young children of the mayor, so the anti-vax brigade decided to mix it up this morning, by going to City Councilor Ricardo Arroyo's mother's house in Hyde Park and screaming at her even though Arroyo himself no longer lives there - and was not there this morning. Read more. 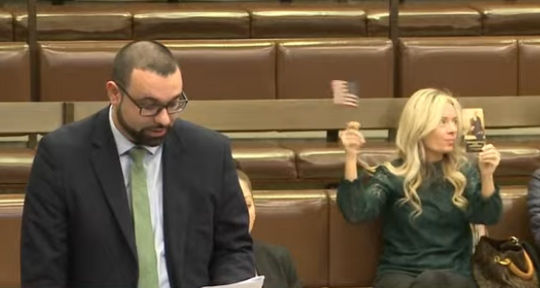 Arroyo and ejected woman before she started yelling and got ejected.

The City Council returned to its chamber for an in-person meeting today, during which Council President Ed Flynn ordered two people removed after they began yelling as City Councilor Ricardo Arroyo was discussing a proposed ordinance to ban loud protests at specific people's houses between 9 p.m. and 9 a.m. Read more. 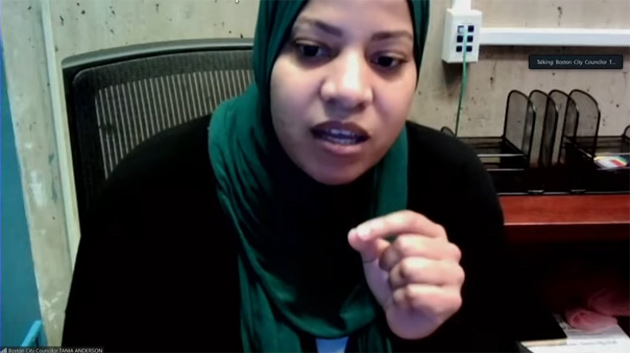 Three city councilors of color today expressed hesitancy over a proposed ordinance that would prohibit targeted protests outside the mayor's house early in the morning, saying that while they understand what it's like to be hit with racist bile, they're not sure they have enough faith in Boston Police to not then turn the rule against Black Lives Matter and other protesters. Read more.

Race for DA could be referendum on Rachael Rollins

CommonWealth Magazine surveys the race for Suffolk County District Attorney so far, between Boston City Councilor Ricardo Arroyo, a Rollins supporter, and Baker appointee Kevin Hayden, who is more of a moderate.

Arroyo to run for DA