Transit Police report that around 10 a.m. a woman, 20, was hit by an inbound Worcester Line train in West Newton while she was on the tracks for some reason. She was taken to a local hospital with serious injuries, police say, adding foul play is not suspected. 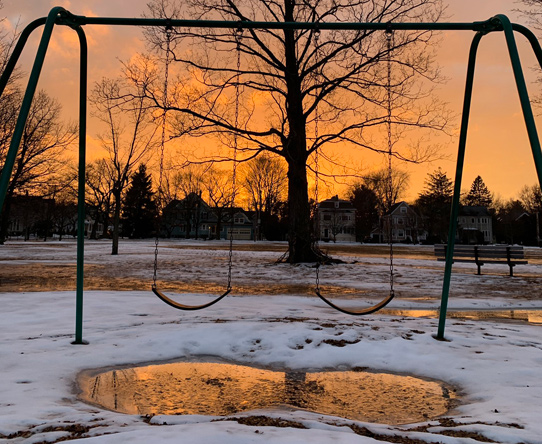 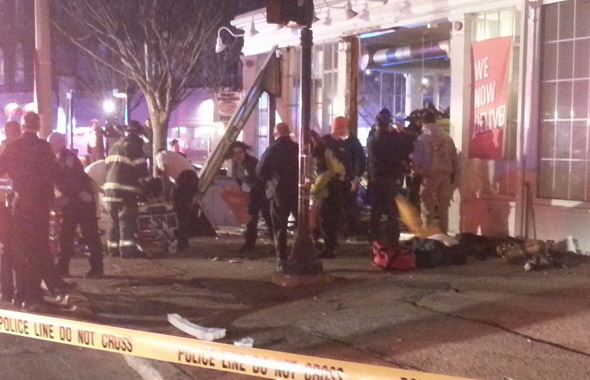 WCVB reports two people inside Sweet Tomatoes, 1279 Washington St., in West Newton, died when an SUV crashed into the restaurant tonight - and that seven other people were injured.

Tyler captured the flaming, exploding Bolt bus on the eastbound turnpike in West Newton. State Police report two lanes are shut - and that no one was injured. Read more.

The bald eagles of West Newton

Lauren photographs one of the bald eagles that have taken to roosting behind her house as they prepare a nest. 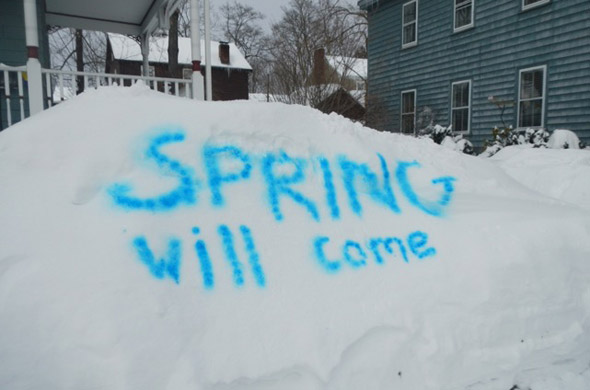 Man goes on carjacking spree that starts in Newton, ends with a crash in Bedford

End of the line in Bedford. Photo by Billerica PD.

Brian D'Amico reports state and local police doggedly pursued a man who carjacked a woman in Newton, rammed into three cars in West Newton, got shot at by police, carjacked another person in Billerica, carjacked yet another person in Concord, then kept on going until he crashed into a pole and a tree on Springs Road in Bedford. He may have also found time to shoot somebody in Carlisle.

Man not killed by speeding commuter train in Newton

Transit Police report that when officers caught up with William Mitchell, 36, traipsing inbound along the Worcester Line tracks in West Newton shortly a

Dave reports an incident shortly before 8 a.m. at the West Newton commuter-rail stop:

Exciting AM - just did CPR on a commuter at west newton. We got to him just after he collapsed; started CPR.

And Newton EMS shocked him from vfib back to sinus rhythm ... He had a pulse when we put him on the ambulance.

A man died when he fell under a train around 8 a.m. The MBTA is now running buses between Wellesley Hills and Newtonville, but says riders should expect "significant delays" and seek alternate transportation if possible.

MBTA spokesman Joe Pesaturo the body is under the third coach on an inbound train and that Transit Police are now attempting to figure out what happened.

Newton man may have mistaken West Newton for OK Corral

Wicked Local Newton reports a police officer found himself confronted with a gunslinger on Elm Street yesterday - who turned out to be packing only plastic. The local man, dressed like a cowboy and with what seemed to be a gun in his pocket, went into "Western Movie Gunfighter's Style Stance" when one officer approached. But he wasn't fast enough on the draw for another officer, who tackled him.

OK, now the turnpike authority is just screwing with us

Enid O'Donnell reads about the plans to shut the West Newton turnpike ramp, at least temporarily, and wonders what in the world the turnpike authority was thinking. She e-mails:

Fox on his blocks

This is a very urban neighborhood and it was crossing the street next to my house.

Kristine reports the Store 24 in West Newton is closing Nov. 26.