They're delayed more than an hour, so of course Rockport riders are pretty sour

UPDATE: At 9:42 p.m., Erin Larsen, who got on at Montserrat around 7:07 reported: "It’s been 2 hours and 20 min and we still haven’t arrived at North Station. Plus TWO trains (inbound) have passed us."

Shortly before 9 a.m., Keolis updated us on the fate of Train 156, which left Newburyport at 7 a.m. Read more.

Up in Salem a real witches brew; train to Boston is way overdue

Transit Police report a man on a bicycle was hit by an outbound Newburyport/Rockport train at the Beverly Depot station around 8:20 a.m. He was taken to the hospital with serious injuries.

Can anybody explain this dead commuter-line train? 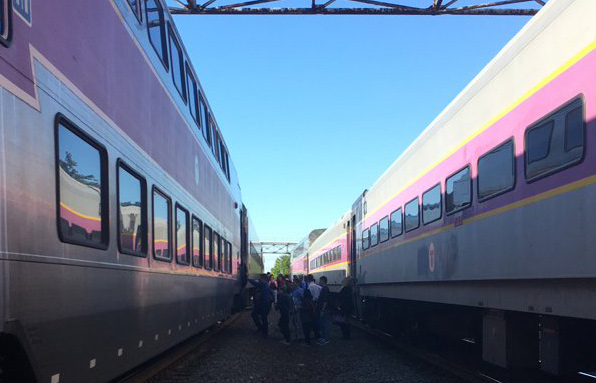 Wonderfitzig was among the people who had to hop off inbound train 156 on the Newburyport/Rockport Line train and get on another after the engine sighed its last and went to the great roundhouse in the sky this morning near River Works - after their train just sat there for 90 minutes or so. Read more.

What's going on with Newburyport/Rockport lines?

The trains have been late, delayed or outright cancelled for the past week and a half...this morning coming from Salem was ridiculous! And, why is that the GPS on most trains suddenly goes dark when the trains are late, delayed or cancelled? Is Keolis playing games with their 'on time' performance metrics?

But fear not, the latest fare increase doesn't hit until July....aaargh

Man struck and killed by commuter-rail train in Chelsea

Everett Street crossing after the fatality. Photo by KMV.

Transit Police report a 21-year-old man died around 9 p.m. yesterday when he disregarded the downed gates and flashing lights at the Everett Street crossing and tried to walk across the tracks, only to get hit by an outbound Rockport Line train.

Harry Pierre reports the line for the next Newburyport/Rockport train, which stops in Salem, is a bit more crowded than usual this afternoon.

WCVB reports officials are investigating how a car on the Newburyport/Rockport Line train separated from the rest of the train yesterday.

It's buses all the way down, at least to Salem, for Newburyport/Rockport riders

Claire Blechman was among those having to transfer from a bus to a train in Salem, due to work on the Newburyport/Rockport Line that will keep it shut through Aug. 13.

Smushed Lowell Line train due to earlier cancellation this AM. Photo by Jeff Durney.

A crescendo of complaints by commuter-rail riders about cancellations, delays and overcrowded trains reached a new peak this morning as commuters into both North and South stations vented their frustration online.

They joined Lily Goldman, a Rockport Line rider who's been complaining for months now about ghost and late trains on her route: Read more.

Riders on the Newburyport/Rockport Line are getting fed up, actually.

Newburyport Line under a curse; riders wonder if it could get worse

Here are some of the current MBTA alerts for the Newburyport/Rockport Line: Read more.

Once again, the riders of the Newburyport/Rockport Line this morning had to contend with phantom trains that exist only in a work of fiction known as "a timetable."

On days ending in Y, Rockport riders get to sigh

Some riders on the Newburyport/Rockport Line are beginning to wonder what they did to the T to deserve the pain they get every morning.

Today's delays on the Newburyport/Rockport and Haverhill lines are brought to you with a Viagra-fueled drawbridge that just won't go down. 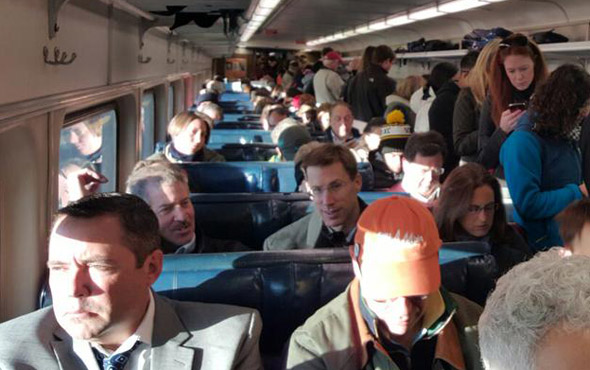 If the morning cold snap was a test of the newfound resiliency on commuter rail, well, some riders wish to have a word with the T. Laura was among those stuck on a Norwegian Blue of a Newburyport/Rockport train in Swampscott this morning.

Boston Obvious was among those who spent more than an hour in Lynn waiting for a train (not sure if the same train as Laura was on). Read more.

Around 1 a.m. on the outbound side at the Prides Crossing stop, Transit Police report. Foul play is not a factor in the death of the 20-year-old man, police say.

Man on tracks killed by train in Gloucester

Transit Police report a man, believed to be in his 40s, was on the inbound side of the tracks near West Gloucester station when he was hit and killed by an inbound commuter-rail train around 6:30 p.m.

Police and the DA's office are investigating what the man was doing on the tracks.

Yesterday, a woman was hit by a train in Bridgewater, but she survived.

Happened around 8 a.m. on an inbound Rockport train, according to Bill Kyrouz and Lisse, who were on the train.

Lisse reports the woman tried boarding the train as it was pulling out of the station. Fortunately, she says, a "quick thinking conductor" applied the emergency brake and the woman appeared to suffer only a cut head.

The woman was transported to Beverly Hospital alert and conscious.

Train service on the line is now halted.