12-year-old arrested on gun charges in Dorchester after running from stolen car driven by a 16-year-old, police say

Brockton man with a gun blasted away at driver who rear-ended him in Franklin Field, DA says 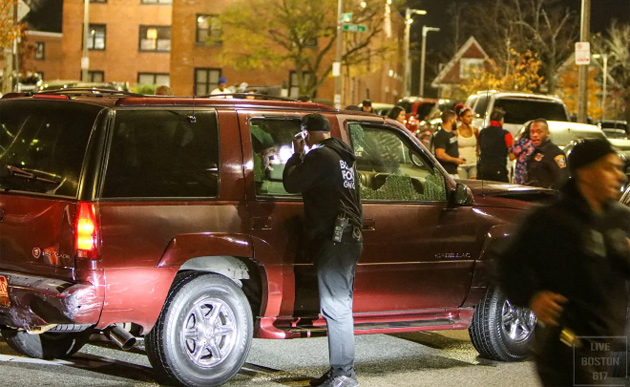 Officer looks in Escalade that had just been shot up. Photo by Live Boston.

Live Boston reports a man who pumped several bullets into another driver for rear-ending him last night on Westview Street in Dorchester's Franklin Field development was arrested less than two hours later after he showed back up in his hometown of Brockton, where State Police were looking for him . Read more.

A person was shot at 92 Westview St. in the Franklin Field development shortly around 9:40 p.m. The homicide unit was called in due to the severity of the victim's injuries.

Unlike in some other states, you still need a license to own a gun in Massachusetts. The state's highest court ruled today that in certain cases, judges can order people arrested for violating the law to be held without bail before trial as a danger to society - such as a man arrested after driving through a police barricade at the Franklin Field housing project early one morning last year, allegedly with a loaded gun in his glove compartment Read more.

Shortly before 8:50 p.m. at Westview and Ames streets, Stanley Staco reports. One victim was transported to a trauma center, the second made his own way to a local hospital. 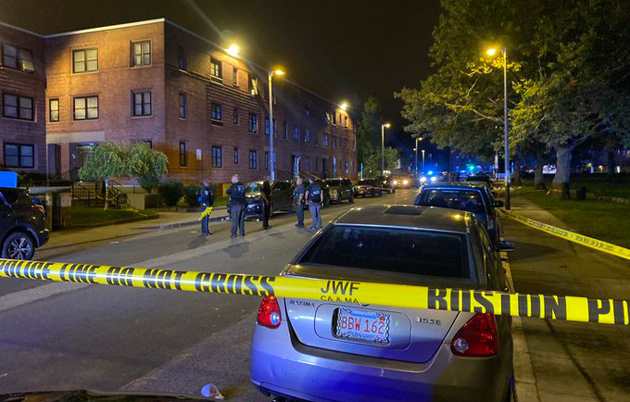 Boston Police report a man and a woman were shot at 240 Westview St. in the Franklin Field development around 9 p.m. Read more.

Police can't use stored body-camera video collected inside a home in one case as evidence to arrest somebody in another case without first getting a warrant to search it, the Supreme Judicial Court ruled today. Read more.

Five people shot at Franklin Field in Dorchester, one dead

Shortly before midnight at at 5 Ames St., between Ames Way and Westview Street. Read more.

Several shots were reported behind Ames Street in the Franklin Field development around 9:30. Not long after, police found spent shells there and what appeared to be bullet damage to an Ames Street building. And not long after that, somebody showed up at a local emergency room with a gunshot wound not considered life threatening.

Bloody 12 hours around Franklin Field and Harambee Park: Four separate shootings, one in a shootout in front of police, one dead

In the leg, around 11:10 p.m. between Stratton and Ames streets. Injuries not considered life threatening. Read more.

Man arrested in the Dominican Republic for 2014 Franklin Field murder

Boston Police report fugitive-unit officers flew to Santo Domingo in the Dominican Republic yesterday to arrest Freidy Baez, 30, for the stabbing murder of George Sanchez at 5 Ames St. on Sept. 21, 2014.

A car was hit by gunfire shortly after 1:45 p.m. on Westview Street at Westview Way. No people hit.

At 20 Stratton St. around 11:10 a.m. Because of the severity of the victim's injuries, the homicide unit has been called in.

A suspect is in custody.

A parent is reaching out: 2011 murder

A woman was shot in the face as she sat in a car at Westview and Ames streets in Dorchester around 9:40 p.m. Injuries not considered life-threatening.

Authorities today announced the indictment of Julian Troche, 24, for the murder of Dantley Leonard in Franklin Field on Nov. 12, 2016 - five days before he was arrested for the murder of Andrew Flonory earlier that year. Read more.