We still don't really know why David Ortiz got shot

Dan Kennedy notes the dueling Boston Magazine and Globe stories over the weekend over why David Ortiz got shot in 2019. The Globe does have former BPD Commissioner Ed Davis recounting a disrespected-gangster theory, while BoMag does not; Kennedy notes that Davis, hired by Ortiz, is a security consultant to the Globe, whose owner, of course, is a major shareholder in the Red Sox.

Meanwhile, a bitter man is bitter.

Via the Red Sox, David Ortiz's wife, Tiffany, reported today that Big Papi needed more surgery this week to deal with complications from his gunshot injuries.

David is recovering well and is in good spirits.

The Dominican Republic’s attorney general and national police director told reporters that the attempted murder was ordered from the United States by Victor Hugo Gomez, an associate of Mexico’s Gulf Cartel. They said Gomez had hired a gang of killers to eliminate his cousin, whom Gomez suspected of turning him in to Dominican drug investigators in 2011.

WBZ reports that among the people nabbed in the Dominican Republic is the guy who allegedly shot David Ortiz in the back.

David Ortiz shot in the back in the Dominican Republic

Update, Monday a.m.: Ortiz remains sedated and in the ICU after an operation in which his gallbladder and part of his intestines were removed.

CDN 37, a news station in Santo Domingo, is reporting (in Spanish) that David Ortiz was shot in the back outside a bar tonight by two men who rode up on a motorbike - one of whom was quickly surrounded and beaten by bystanders. Read more.

It's going to be strange next year without Big Papi

Her last game with Big Papi

The Boston Business Journal reports an otherwise routine budget bill got a last-minute addition that would name the Brookline Avenue bridge near Fenway Park the David Ortiz Bridge. Read more.

After October, David Ortiz can have a career as a designated driver

Yes, of course David Ortiz put on a wig to masquerade as a Lyft driver.

One Big Papi you don't want to get too close to

David Ortiz gets all Babe Ruth with home run

Ortiz didn't just hit the game-winning home run against the Yankees yesterday. WBZ reports he hit the home run after promising a sick little kid he'd do so - just like Babe Ruth once did. 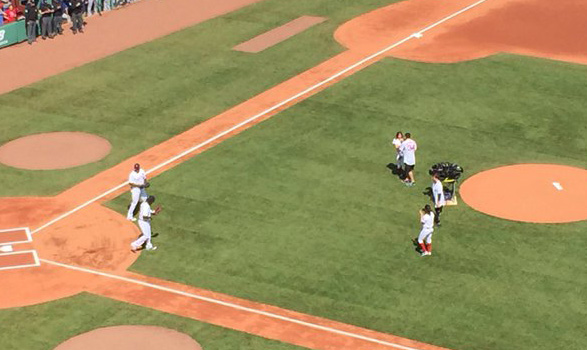 Giving thanks for Big Papi

Surviving Grady sums up what David Ortiz has meant for Boston in general and him in particular - in the fall of 2004, his father's cancer had returned and nothing was stopping it.

We knew there wasn’t a lot of time left, and watching the Sox piss away their chances in the first three games of the series just brought home the point that my old man would likely never realize his life goal of seeing his team win it all.

But then, game four happened. And then game five. And with every night, it seemed that Ortiz literally gave us a new lease on life. Despite the drugs and medication and despair and uncertainty, my dad was born again that October. It had been a long time since I saw him so animated, so excited, so goddam optimistic about things to come.

What would a Boston-themed video game be without David Ortiz killing zombies with a spiked bat?

You can download a Fallout 4 mod that lets you play David Ortiz in a post-apocalyptic Fenway Park with a spiked bat. Video contains scenes of Ortiz slicing through zombies with that bat.

Takes a moment for the video of David Ortiz's home run to come up: Read more.

Happy 4th to everyone. Loud and proud, being part of this country. God bless America. pic.twitter.com/5ZI8K8oWWf