A 69-year-old Melrose man who received his first financial-fraud conviction when he was just 19 was sentenced yesterday to seven years and three months in federal prison for a scheme in which he received some $350,000 in Massachusetts unemployment payments, many in the names of people actually not eligible for unemployment because they were in prison. Read more.

Snow message: You know what to do 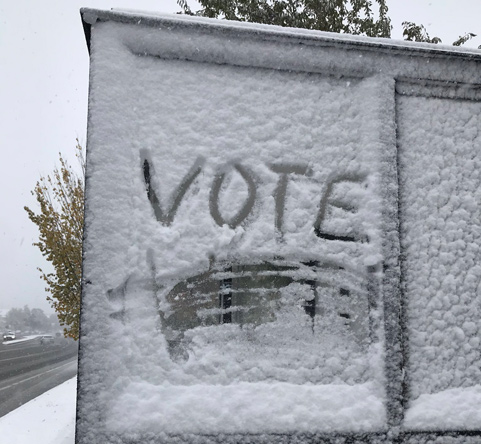 June Politano reports she got a little bored while waiting for the bus on the Fellsway this morning, so she left a message for other riders. 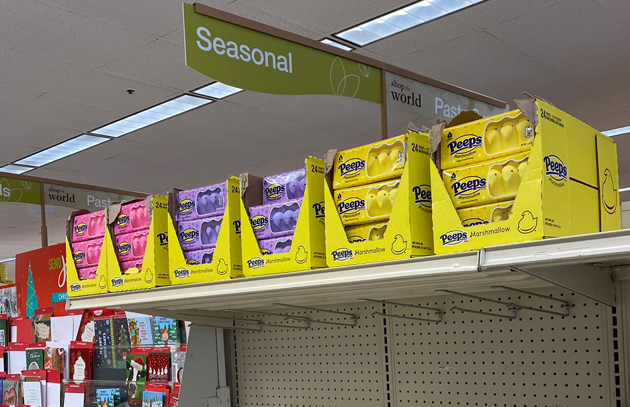 Andrew Applegate reports the Shaw's in Melrose wasted no time getting its Easter stocks out today - right next to the (discounted?) Christmas cards.

The frozen falls of Melrose 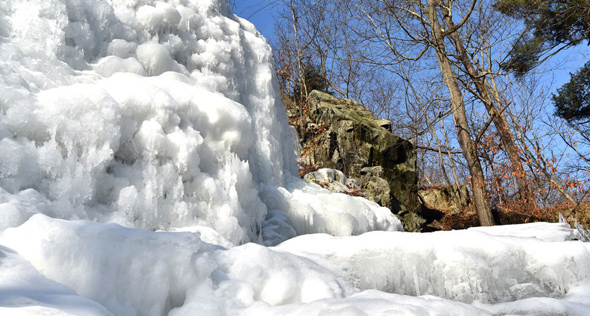 Greg Cook takes a walk to the still frozen Cascade falls in Melrose - and provides directions for how to get there from Oak Grove station on the Orange Line.

Downpour on the move 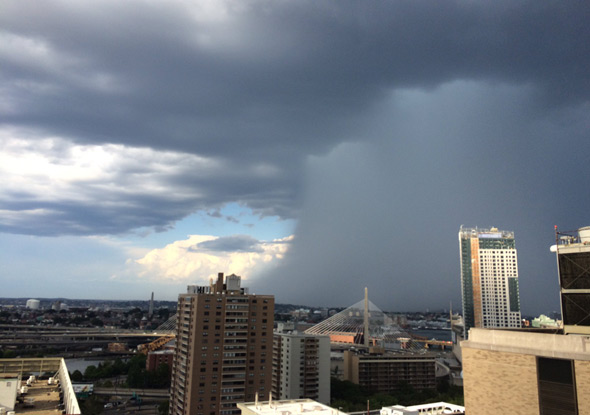 It looked like a killer death storm was about to swallow up Boston late this afternoon. That John Gage was able to post this photo strongly suggests it didn't.

It did, however, get pretty intense in places such as Chelsea and Melrose: Read more.

Person on Haverhill Line tracks struck and killed by train

Wicked Local Melrose reports on the death of Garrett Swasey, one of three people murdered yesterday at a Planned Parenthood clinic.

Some people shouldn't be allowed anywhere near matches 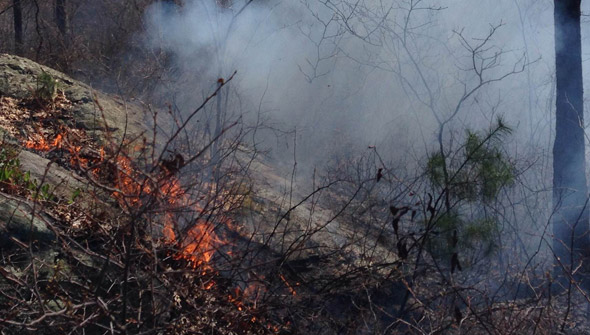 A roving UHub photographer was out for a hike with his family in the Middlesex Fells this morning:

Some jerks left a fire pit and a bunch of beer cans which led to the fire. It was about 100yds long and pretty deep in at the time we found it. Melrose fire called.

Melrose Police report arresting a Melrose man early this morning after, they say, he led officers on a careening chase that ended at the Malden River, where he drove into the water - on the rims that were all that were supporting his pickup - then got out and swam away, all the while taunting the firefighters trying to save his alleged drunk ass.

Melrose Police said tonight they're working with the Middlesex County District Attorney's office to figure out just what to charge the owner of the owner of R D’s Delicatessen and Market on Franklin Street with.

It was reported that a Melrose resident purchased a lottery ticket that won $10,000. The resident thought she had won $1,000 and went to cash the ticket at the Deli. The owner gave her $940 and explained that he had deducted taxes. Thinking this was suspicious, the resident's family requested an investigation.

WBZ reports the store owner told a mentally disabled customer his winning lottery ticket was worth $1,000 - and gave him $950 in cash for it. The ticket was actually worth $10,000.

A couple who used to shop at the Melrose Shaw's is suing the chain's parent companies over a massive credit-card breach disclosed earlier this month - saying they never would have shopped at the store if they'd known it was overseen by a bunch of incompetent boobs unable to learn from previous retail breaches or even apply industry-standard security measures.

The Albanian who wasn't a G-Man: Melrose man charged with elaborate scam against fellow immigrants

A Melrose man originally from Albania allegedly preyed on two of his fellow countrymen, stringing them along for years - and thousands of dollars in payments - by pretending he was a G-man who could get one a law-enforcement job and get the other one's wife kicked out of the country, according to a federal complaint filed last week.

Gjerji Pelushi, 28, faces up to three years in prison on the two charges of impersonating a federal officer, which included having one of the men conduct "surveillance" on a sex offender selected at random, a local mosque and alleged bridge-photographing terrorists in Somerville.

Police: Driver rams motorcyclist, then backs up and drives over him - and then does it again

Melrose Patch reports on some major road rage this morning.

Melrose Police are looking for two guys who got away from a housebreak on Feb. 10 with a number of items, including "a large amount of change" and a pillowcase. They put the change in the pillowcase, then booked it to a nearby Johnnie's Foodmaster, where they poured all the change into the CoinStar machine.

Police did not say if the duo sucked up the CoinStar service fee and cashed in at the service desk or if they went for a gift card from one of CoinStar's many fine merchant partners.

Channel 5 reports a Melrose shopowner says she found the visage of Mother Teresa on a cutting board.

One wonders if she knows the Methuen woman who found Jesus on the bottom of her steam iron. Jen Stewart went to the Melrose Memorial Day parade, where some Boy Scouts used a catapault to distribute candy among kids. ... [W]hile I was shivering at the bus stop, waiting for a bus that appeared to either have arrived early and left me behind, or was running late, my neighbor (who usually takes the bus) pulled up in her car and asked if I wanted a lift to Oak Grove. ...