Two Connecticut men face gun charges after armed robbery in Jamaica Plain, one after he allegedly went to the police station to ask for the gun seized from the other

Boston Police report arresting two men from Bridgeport, CT on a variety of charges stemming from an armed robbery at Lamartine and Mozart streets in Jamaica Plain early this morning. Read more.

Two shot to death on Mozart Street in Jamaica Plain 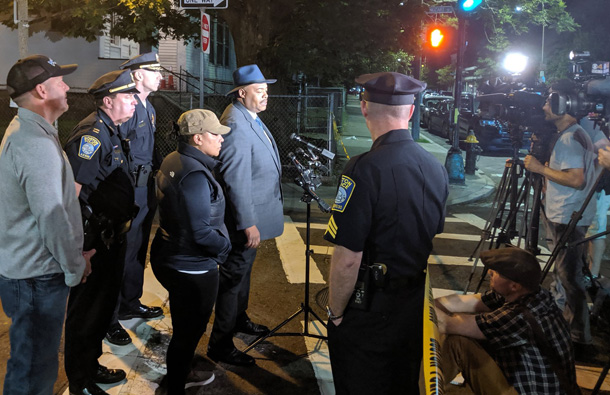 Two men were shot, one in the head, on Mozart Street at Bolster Street in Jamaica Plain, around 9:55 p.m. Read more.

Around 10:05 p.m. in the Mozart Street Playground at Mozart and Centre Streets. A bullet, believed to have been fired in the park, hit a house on Sheridan Street, several blocks away. No victims reported.

Three alleged members of the Mozart Street gang - which has been tied to murders and violence from the Dominican Republic to a Jamaica Plain pizza place - were indicted this week on federal gun charges after they were allegedly observed shooting "three guns and hundreds of rounds of ammunition at paper targets in an apparent effort to improve their marksmanship."

Christian Green, Jeffrey Medina and Sherwin Garcia were indicted in US District Court in Boston on charges of being felons in possession of firearms following their arrest on Dec. 22 as they left a shooting range in Salisbury. All three are convicted felons, which makes it illegal for them to handle guns, but police watched them enter and leave a Salisbury shooting range, at which they paid their $333 tab in cash after shooting hundreds of rounds at eight paper targets in two shooting lanes, the indictment alleges, adding they all signed a waiver saying they had no prior felony convictions.

In an affidavit filed against Green, Boston Police Officer Manuel Blas wrote he was surprised when he learned of their trip north: