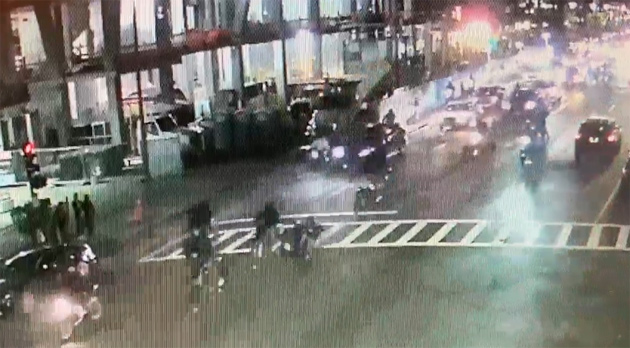 State Police report they are hunting roughly 40 people on dirt bikes and ATVs they say began attacking an 82-year-old Brookline man near the Bowker Overpass, then kept following him as he tried to escape onto Storrow Drive and then beat him when he rolled down his window on Cambridge Street in Allston to yell for help this past Thursday night. Read more.

The Boston Sun reports residents living near Charlesgate and the Bowker Overpass are reporting more homeless people setting up camp there following the city's "Clean Sweep" along Methadone Mile.

State Police report the man who managed to carjack a Kia on the Bowker Overpass, drive against traffic and then flip the vehicle at the start of rush hour on Friday was arrested at the scene. Read more.

Stolen car winds up on its back at Bowker Overpass 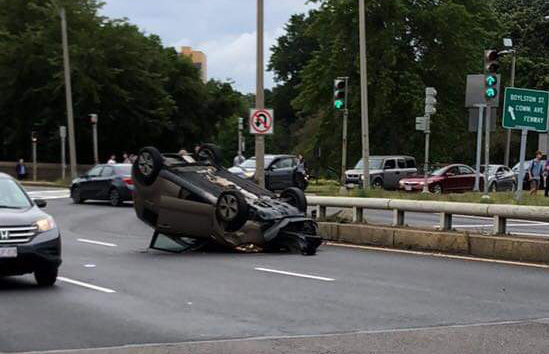 Robert Alvarez reports getting onto Storrow Drive at Charlesgate quickly became a mess after a car rolled over around 5 p.m. WFXT reports the car was carjacked nearby about 15 minutes earlier and had been driving the wrong way.

The Boston Sun reports on the nascent Charlesgate Alliance, which aims to restore what grandeur it can to Charlesgate, once a tree-lined pond where the Muddy River entered the Charles but now a dumping ground where homeless people drown.

Parting is such sweet Storrow

Shortly after 10 a.m., State Police reported a truck driver heading out of town on Storrow Drive managed to smash his truck into the Bowker overpass, and now his truck is stuck there.

Ric Duarte was among commuters who had plenty of time this morning to consider the impressive sardine-canning of a truck whose driver learned the Bowker Overpass is not meant for his ilk.

Antoinette Antonio reports the box truck is wedged in nice and tight, so it's going to take some work to get it out.

Ed Hatfield captured the scene yesterday on the entrance to Storrow Drive from the Bowker Overpass:

I would hate to drive in any big city in anything bigger than a sedan. Why doesn't GPS warn these guys? I think this guy was trying a U turn and got stuck. There is a very small cut through just to the left.

At least he didn't plow into an overpass, sending 33 of his passengers to the hospital like the last guy.

Will state tear down Fenway/Back Bay eyesore - or turn it into a turnpike onramp?

State officials hold a meeting tonight to discuss options for the turnpike through the Back Bay and the Bowker Overpass - the decaying hulk that now speeds cars across the fetid remains of the Muddy River between Fenway and Storrow Drive.

At the session, which begins at 6 p.m. in the mezzanine conference room at the BPL in Copley Square, state transportation officials will discuss various options for improving the Back Bay for people encased in metal shells, including extending the overpass to the turnpike for people heading to the airport or just tearing it down altogether and replacing it with a simple surface road. Another possibility is a new offramp to Brookline Avenue.

State officials recently announced plans to tear down the equally decrepit Casey Overpass in Jamaica Plain and replace it with surface roads and parkland.