Panic at the nightclub on report of shots fired 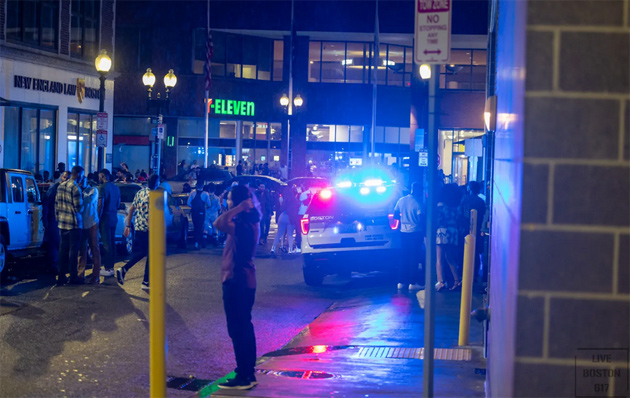 Clearing everybody out. Photo by Live Boston

No shell casings or other evidence of gunfire were found after the 1:30 a.m. incident. Still, Venu and nearby clubs were evacuated to allow for police sweeps, and after people "ran for cover after reports of shots fired inside of one of the clubs."

Two people were stabbed at Warrenton and Stuart streets around 2:20 a.m., Stanley Staco reports. Both victims were taken away in critical condition.

The stabbings came just hours after a community meeting on violence in Chinatown.

How first night of vaccine mandate went at one Boston club: Not well

On what was already looking to be a slow night due to the brutal cold and the (equally brutal) Pats game, the first night of Boston's requirement that people show proof of at least one Covid-19 shot at public indoor spaces did not go well at all, promoter Ace Gershfield reports from at Venu in the Theater District. Read more.

Eversource wins approval for new Theater District transformers, but with warning to clean up its properties elsewhere in the city 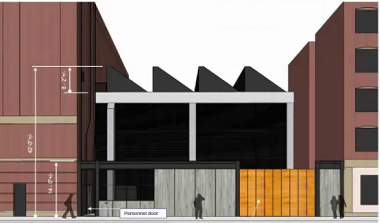 The Zoning Board of Appeal today approved Eversource's plans to replace a parking lot next to its Warrenton Street substation with two new transformers - with room for a third - but only after board Chairwoman Christine Araujo told the company it needs to do something about the sad state of its properties elsewhere in Boston, in particular in Roxbury and West Roxbury. Read more.

A chandelier at Icon, 100 Warrenton St., fell from the ceiling shortly before closing on Dec. 14, injuring at least two women, both of whom got themselves to local hospitals to get checked out. Read more.

Boston Police report that two men who had been kicked out of Icon, 100 Warrenton St., early this morning were arrested after witnesses spotted them getting a gun out of a nearby parked car. Read more.

A February fight that ended with one woman grabbing another in a chokehold and repeatedly punching her at closing time outside CandiBar on Warrenton Street is one of three incidents that prompted owner Charles Delpidio to end a weekly reggae night after just ten weeks. Read more.

If you rip your shirt off in a bar and vow to take care of the people you were arguing with, best to make sure they don't have reinforcements

A man who ripped his shirt off as he was being escorted out of a Theater District club and vowed to take care of the guys he'd been arguing with waited around outside - only to find himself beaten to the ground and stomped when they were joined by more men, in an attack that ended only after police sprayed the scrum with pepper spray twice. Read more.

Police: Guy with loaded gun arrested at Theater District club recently ordered to be shut down

Boston Police report people coming out of the clubs on Warrenton Street this morning didn't want to go quietly into the good night.

Instead, police say, the "boisterous and uncooperative" crowd milled about the parking lot there as five arguing women began fighting with each other:

Several officers from surrounding districts arrived on scene in an attempt to control the rowdy crowd. Officers had to draw non-lethal weapons (OC spray and batons) in efforts to disperse the crowd of combatants.