A federal judge ruled Friday that the former owners of the Suffolk Downs racetrack provided evidence of possible wrongdoing by the company that won the Boston area's casino license - but failed to prove that was evidence of racketeering. Read more.

WBZ reports three people were charged with being excessively brawly as the nightclub in our new casino that's relatively close to the harbor closed early this morning - and a fourth person was taken into custody for his own good for being over-ethanoled.

New casino rakes in $16.8 million in first week of gambling

The Encore Boston Harbor casino made $16.8 million in gambling revenue between its opening June 23 and June 30, according to figures released today by the state Gaming Commission. Read more.

The Everett Independent reports that Wynn announced tonight it's not selling its nearly finished Everett casino and will open it itself, averting a crisis that would have raised questions about the future of MGM's already open Springfield casino, as well as about the health of Everett Mayor Carlo DeMaria, who had vowed MGM would take over his city's casino only over his dead body.

WGBH reports the state gaming commission is looking into two allegations - and how executives at the company, still named for Wynn, that owns the casino handled them as it gets ready to make the final determination on whether the place can open.

With the Wynn Encore Boston Harbor casino nearing completion, the company that owns Suffolk Downs has filed a suit under the federal racketeering law against the project against Wynn and the company Wynn bought its Everett land from. Read more.

It might be a bit of a moot point now, given that Wynn Resorts has stripped Steve Wynn of his management responsibilities, but the Massachusetts Gaming Commission today formally stripped him of his right to be involved in management of the Everett casino that will now be called Encore Boston Harbor. Read more.

Casino will no longer be eponymous

Wynn Resorts announced today it's changing the name of its Everett casino to Encore Boston Harbor in a bid to remove the taint of sharing a name with Steve Wynn, who until recently ran the company bearing his name.

The announcement came at a Massachusetts Gaming Commission hearing on whether to formally strip alleged serial sexual attacker Steve Wynn of his right to have anything to do with gambling in Massachusetts. Commissioners will consider the issue privately before announcing a decision.

Vital Vegas reports that when the mega-casino in Everett opens, it will be named the Encore Boston Harbor, rather than than the Wynn Boston Harbor because it turns out that Steve Wynn might have had an even worse problem with women than Mario Batali, whose name also is no longer spoken of in the Prudential Center food court that used to have his name splashed all over. Read more.

Wynn casino could lose that name

WHDH reports Wynn officials are considering ditching that name from the Everett casino they're building because of all the publicity about what a horrible person Wynn was.

The Herald reports the commission is more than perturbed at the Wall Street Journal report that the casino mogul - whose $2.4-billion Everett casino is now rapidly rising - has been sexually abusing workers for decades, and is starting an investigation into whether Wynn still has "suitability" to own a Massachusetts gaming license.

Maybe moot at this point, but court rules gaming commission might have violated open-meeting law in approving Wynn casino

With the Wynn casino in Everett now under construction, the Supreme Judicial Court ruled today that a judge should consider whether the state Gaming Commission violated a law requiring public deliberations during its considerations on whether to award a license to Wynn or a competing proposal at Suffolk Downs. Read more. 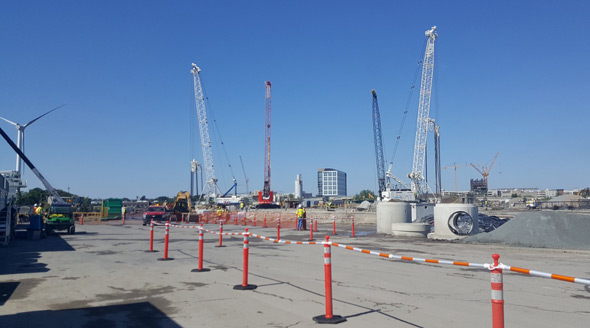 This morning, Scott Whollley walked around the Everett site where Wynn is building its Boston-area casino now that Somerville says it won't appeal its state approval.

Wynn said it's put is $1.7-billion Everett casino on hold until after state officials rule on environmental objections filed by the city of Somerville.

The company took no similar actions while fighting the city of Boston's federal lawsuit, which, granted grew increasingly unlikely to succeed the more a judge read Boston's legal pleadings.

On hearing the state gaming commission had approved the $68-million deal between Wynn and Boston, Everett Mayor Carlo DeMaria issued a statement commending both sides. He concluded:

This is literally a win/Wynn outcome for everyone.

Mayor Walsh's office announced tonight that Boston has signed a "Surrounding Community Agreement" that includes $68 million worth of payments to the city over the next 15 years and an effort to spend at least $20 million a year with Boston businesses over the same period.

The agreement marks the end of the city's increasingly futile court challenges to the Wynn casino on a parcel in neighboring Everett. Read more.